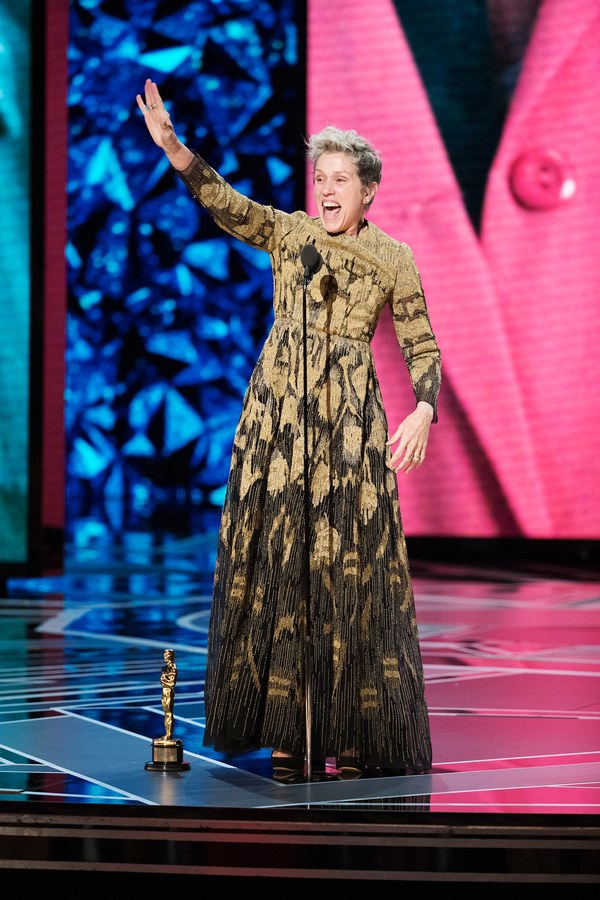 The Buzz with Kirsten Wyatt

What I Am Reading: Maisie Dobbs’ Birds of a Feather by Jacqueline Winspear

What I Am Watching: Homeland

What I Am Listening To: New Freezer

What I Am Re-Watching: The Marvelous Mrs. Maisel

I’m an awards show junkie. I love them and my family has slowly come to accept this, to the point where Kent pours me wine, cooks me dinner, and makes our kids leave me alone during the show. I’m not quite sure why I love them so much; the criticism is valid and the shows are always so. incredibly. long.

Sunday’s Oscars broadcast was really long, and some of my personal favorites didn’t win awards, but toward the end, Best Actress award winner Frances McDormand introduced a concept that I’ve been thinking about since: an inclusion rider.
Here’s a definition from NPR:

Two simple words they may be, but when Frances McDormand closed her acceptance speech with them at the Academy Awards, not a whole lot of people had heard those terms paired that way. The big spike in Google searches for the phrase Sunday night reflects the frantic clatter of people across the world summoning those key words.

So, what is an inclusion rider, exactly?

Simply put: It’s a stipulation that actors and actresses can ask (or demand) to have inserted into their contracts, which would require a certain level of diversity among a film’s cast and crew.

For instance, an A-list actor negotiating to join a film could use the inclusion rider to insist that “tertiary speaking characters should match the gender distribution of the setting for the film, as long as it’s sensible for the plot,” Stacy L. Smith explained in a 2014 column that introduced the idea in The Hollywood Reporter.

There are very few instances where local government and Hollywood can claim similarities but we can learn a lot from actors and contracts that include inclusion riders.
As I’ve written about before, there’s a finger pointing problem between recruiters and city councils when it comes to hiring women and people of color:

This finger pointing gets us nowhere and distracts from the real problem that we’re not growing the number of women and people of color in leadership fast enough. Something that contractually obligates inclusion might be a solution. Consider this:

When hiring a recruiter, a city could require an inclusion clause in the contract that the hiring process will require a certain level of diversity among the finalists advancing to the council review process.

It’s similar to the Rooney Rule, which we’ve also written about. The Rooney Rule requires National Football League teams to interview minority candidates for head coaching and senior football operation jobs.  Applying the Rooney Rule to local government manager recruitments would require inclusion of a minority (gender or race) in the interview stage.

One of my favorite mayors is Mayor Mark Gamba in Milwaukie, Oregon. He’s been a long time supporter of ELGL and was well aware of the #13Percent problem when he and his council began working with another ELGL recruiter friend, Heather Gantz, for their city manager recruitment. The result: the only all-women finalist round ever. Ever. It’s 2018.
In the Milwaukie example, you had a very progressive mayor, council, and recruiter. They didn’t need a contractual obligation to value diversity. But they’re the exception, not the rule and perhaps it’s time to start aggressively working on inclusion rider language that we can offer to councils that want to demonstrate commitment to diversity and inclusion.
This works in three ways: one, it allows a city to actively say “yes we want to give all candidates equal opportunity to apply and we’re going to contractually address things like me-too bias when picking the people we interview and ultimately hire.”
Second, it allows applicants to look at an organization and understand their fundamental council values related to diversity. If the council takes that step and includes the inclusion rider, they are inserting equity directly into their most important job: hiring a chief executive.
Third, it gives the recruiters (many of which are incredibly dedicated to inclusion – yes, there are some bad apples who have their reliable stable of white dudes who look and act just like them) a measurable goal to include in their search process. Which makes it a lot easier for them instead of vague council direction that they “encourage women and minorities to apply” but then never advance those candidates.
I know that I’ll get comments back on this idea related to tokenism and I realize that an inclusion rider will never eliminate the possibility that even when faced with a diverse finalist pool, city councils will pick the person who looks the most like them, or has the same credentials as their predecessors, or any of the other unconscious biases that people (especially amateur politicians) bring to a hiring process.
But I affirm that instead of worrying about what *might* happen, we need to be aggressive and try new things – like inclusion riders – that could work and will help us move the profession forward.

What do you think?

I’d love to hear your thoughts – tweet at me and we’ll get the conversation started (and maybe we can work on inclusion rider language together to share via the ELGL network)!