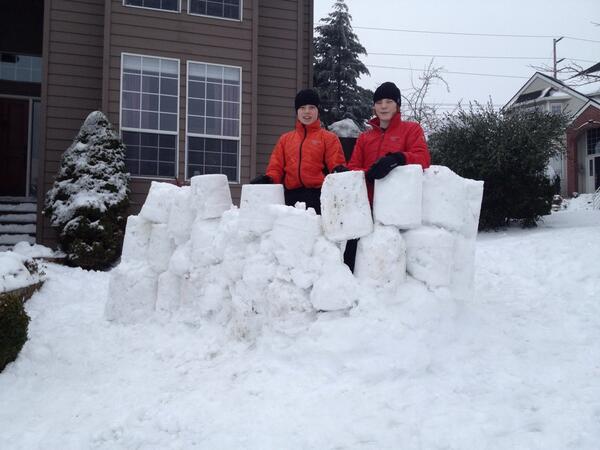 Towards the end of 2013, Patrick Preston, Hillsboro public affairs manager, decided to issue a challenge to neighboring jurisdictions. They wanted to expand their social media presence and specifically focus on making their Twitter account more accessible and active. So they contacted other nearby cities and a competition was born.  The race was on to get to 2,014 followers in 2014, the first community to get there would be declared the winner and bragging rights would be theirs.

Not only have other cities taken notice of the “race,” newspapers, television stations, magazines and radio stations have highlighted the Twitter race.

KATU News: Twitter war: Which city (or county) will win?

This time we check in with each organization to see how they used Twitter during the winter weather this past weekend that shut down most of the Portland metropolitan area.  With hashtags like Snowlandia, Snowmageddon, and Snowpocalypse flying around it was a great opportunity for local governments to step in and reach a wide audience on Twitter.  Let’s see if the competitors took advantage of it.

What about where each account started at? Well here were the standings on December 16, 2013

West Linn: All of the above.  We also RT-ed pictures from citizens; shared our own pictures; and gave color commentary about plowing.

Tigard:  We used Facebook and Twitter to communicate the Street Sanding Priorities Map, library closures, pictures from around town, and the latest weather information from local news sources.  We used Facebook once or twice a day to broadcast less time sensitive, but important, information. We used Twitter to retweet weather announcements, traffic accidents, and closures. We also used Twitter to thank our employees who working around the clock to battle #Snowlandia.  For the last couple of days of the storm, we let citizens know that the most update to information could be found via our Twitter feed. We gained 25 followers by the end of the weather event.

Hillsboro: We used Twitter to keep our community up to date on how the weather impacted our facility hours of operation and services. We also tweeted photos to illustrate the conditions and in the hope that the photos would be shared, increasing the reach of the Twitter feed.

Beaverton: We used social media initially for meeting cancellations and closures. It was then used to give used to give updates on the weather and how the plowing/sanding was coming along.

Washington County: We used social media to give status updates on the County’s hours of operation and to share weather and travel information with the public.

Did you use twitter to answer questions from citizens or reporters about the storm? Any examples?

West Linn: Yes – we had a few upset citizens about plowing schedule and approach so we forwarded those tweets along to PW.  We also specifically tagged pictures for the local news channels photo requests; used the regional “twitter storm team” hashtag (#pdxtst); and also included local TV reporters who we know live in West Linn and would be interested in our posts.

Tigard: This was fun part of the storm. We interacted with reporters (Valerie Hurst and Geoff Pursinger), staff and elected (Carol Krager, Marty Wine, and Mayor Cook), and citizens (@Linda_PDX, @oregongal47, and @MissMarissaMae).  One example of the interaction is with Valerie Hurst from KATU News. We talked over Twitter about what she was seeing on the Tigard roads, Tigard’s street sanding priorities including the difference between local and state maintained roads, and Tigard’s hours of operation. She included much of the information that we provided in the live broadcast. Thanks Valerie! This is a perfect example of how the media and local government can have a mutually beneficial relationship.

Hillsboro: We received and answered reporter inquiries by phone throughout the weekend, with some of those inquiries likely inspired by @CityofHillsboro tweets. We also received a tweet from a resident wishing to thank City of Hillsboro Public Works crews for their service.

Beaverton: Received a couple questions for the media on closures and plowing, and then as the storm was letting up I received a question about dealing with potential flooding. I was able to answer most of their questions with Twitter posts. We had a few upset residents on Facebook about streets not being plowed as quick as they would have liked, but I was able to respond to them directly and point them to our updates.

Washington County: Yes, at least one reporter contacted us throughout Twitter and we were about to respond with an interview later that day.

Do you feel Twitter was an effective/efficient way to get in touch with citizens about weather related issues? What other ways did you get out the message?

West Linn: It was an effective way to communicate with the media, and with some residents.  We threw in a healthy dose of web page and Facebook posts as well to try to reach different types of social media users.

Tigard: Without Twitter, our message would have been weakened. Our Twitter feed has more than 1,100 followers which is much broader audience that we have on other outlets.  “Tweeting” allows the media to quickly receive our message and then they can decimates it to their audience either via retweet or over the airwaves. It also is helpful in limiting rumors that may arise.  Other means of communication: Facebook, website, other Twitter feeds (police, library, mayor, and city manager), and contact with local newspaper.  The Tigard Times contacted us during the weather event to get a contact in public works because the Times wanted to do a ride along with a street crew. That day, the reporter did the ride along and the following morning, he had published the article on the newspaper’s website. Link: Snow plow workers keep Tigard streets safe

Hillsboro: We felt Twitter was effective in combination with our website and email alerts to news media. We added more than 40 followers during the weather event.

Beaverton: With everyone (including many reporters) more or less trapped at home and on their phones, Twitter was very effective way to communicate with the community about everything storm-related. Facebook was also effective as was sending out news releases.

Washington County: Twitter helped, but our communications effort includes traditional media as well. Much of our work during the storm involved communication with employees, which meant a lot of email and phone conversations.

Give us two tips for using Twitter during a winter weather event.

What was your favorite snow related hashtag?

Hillsboro: Didn’t see any that stood out enough to be memorable, but if the snow falls around Thanksgiving, perhaps we can break out #snowvember – doesn’t quite work for January or February.

Beaverton: I enjoyed #snowpocalypse the most with #snowmageddon coming in a close second.

Normally at this point we would turn to ELGL’s resident social media guru, but for this edition of Inside the Twitter race ELGL’s Project Assistant, Ben Kittelson, will be providing his comments from the peanut gallery.  He spent all of last weekend at his parents’ house with nothing to do but shovel snow and read twitter feeds. Ben provides analysis of how each City handled the winter weather and a selection of his favorite tweets from last weekend.

Tigard was very active over the weekend and covered a wide range of winter related topics. Importantly they shared a lot of photos everything from shots of the benches outside City Hall covered in snow to retweeting pictures of kids sledding.  I really like this approach, it makes your tweets stand out to the casual follower and, for those of us stuck inside, it allows us to experience the snow vicariously though Twitter.

Bi-Mart & H Mart are open and have few customers. pic.twitter.com/r6QWzMfQc4

My favorite of these pictures was of two citizens cross country skiing to get to the store. These kind of tweets really make a local government feel personable and approachable.

Tigard Businesses: Send us a tweet if you are open today. #icelandia pic.twitter.com/q7xStAnWjV

The thing that Tigard did the best was to try and engage the business community.  Their Twitter account frequently interacts with high school sports teams, news reporters, and other public agencies but this outreach to local businesses was smart and goes a long way toward building a relationship with the business community.  It was also a very simple request, all they did was ask if places were open and if they were Tigard would tell their followers, nice job.

West Linn gets the award for most creative hashtag for the snow storm, #WestLinnPatio. In an effort to engage citizens they asked for pictures of patios and ones tagged with the #WestLinnPatio hashtag were retweeted by the City (even mine from out in Beaverton).  I also liked this because it didn’t require anyone leaving the warm comfort of their home to participate.

I thought West Linn did a great job of updating their followers on the efforts of the Public Works crews to plow roads. They posted maps of which roads were priorities and told everyone about the hard work the crews were putting in that normally would have gone unnoticed.

Your #WestLinn Public Works crews are working 12-hour shifts to respond to winter weather. Give them a wave and a smile when you see them!

Beaverton was not as active as some other accounts were over the weekend but they did produce my absolute favorite picture from the winter weather.  This picture of the Beaverton Mayor, Denny Doyle, makes me laugh every time I see it.  Maybe it’s because I did an internship for the City and have met the Mayor a couple of times but this was my favorite tweet from the weekend.

I think there was some room to improve for the City, as a resident of Beaverton I knew first hand there were a lot of road problems  throughout the City, but there were very few tweets about back ups on major thoroughfares.  I think community members want to hear about major problems and Twitter is a good place to get the word out about those issues.

Washington County used Twitter as a way to communicate important weather news and updates about closures and road conditions. This is an important part of communication during a storm and I noticed other local government feeds were retweeting things that Washington County had posted.  It seemed like having an account dedicated to roads (@washcoroads) came in really handy for residents and organizations to get updated about the status of local roads.  This news centric approach seemed to work well for the county and here’s an example of the type of tweets they were posting:

Travel hazardous this AM, will be worse in PM. Check http://t.co/5u9F5j6iks B4 u go @washcoroads @trimet #pdxtraffic

What really stood out though was how they retweeted and posted about other government accounts. It showed the unique roll a county can play in bringing in all the organizations within their jurisdiction. In this screen shot you can see they were retweeting updates from the National Weather Service, the Oregon Department of Transportation, as well as TriMet and their roads account.

Hillsboro kept their followers up to date on the latest cancellations and closings around the City.  They also retweeted tweets from some of their partner organizations which is good to spread the word about specific issues or weather updates.  Similar to Beaverton it would have been nice to see more tweets either about road conditions or just providing more information for snowed in citizens to read.  My favorite of their tweets is this one from outside their Civic Center, it’s a great shot of the snow swirling and is a recognizable part of the City.

The view from the steps of the @CityofHillsboro Civic Center. Cancellations & closures are at http://t.co/LHOPKSQHTa pic.twitter.com/aCxPlaw9PC