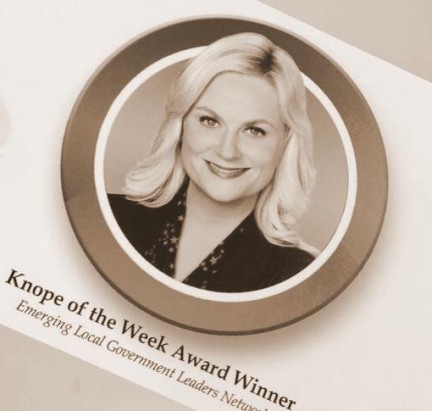 ELGL’s Communication Tools, Including Knope of the Week, Highlighted by American City/County Magazine This week we recognize the panelists from the “Perspectives on Public Safety” forum.

David M. Kirby was appointed Undersheriff by Sheriff Roberts on Oct. 1, 2007. Undersheriff Kirby brings a wealth of experience to the CCSO Undersheriff position: He is DPSST-certified in both basic police and corrections. He also holds certificates in both corrections and law enforcement at the advanced, supervisory, and management levels. He has 13 years experience in the field, with two years’ service as Commander of the Washington County Jail. He has worked as a deputy as well as a supervisor in narcotics, investigations, and patrol. Prior to joining CCSO, he held the position of Commander of the Washington County Sheriff’s Office Investigation Division.

Lake Oswego Police Chief Don Johnson began his law enforcement career in 1979 in Sunnyvale, and more than 21 years he rose to the rank of captain. In 2000 he became police chief of Los Altos, Calif. Five years later he returned to Sunnyvale as director of public safety. He previously served as the Police Chief for the City of Los Altos, California. Chief Johnson has a Masters degree and a Bachelor of Science degree in Criminal Justice Administration from San Jose State University.

Formerly the FBI’s top guy in Oregon, Bob Jordan is now Milwaukie’s police chief. Jordan was assigned to the Oregon FBI post in August 2003 after a stint as chief of the FBI’s Office of Professional Responsibility. Jordan was an assistant district attorney in Philadelphia before joining the FBI in 1980. He served in the Boston, Newark, N.J., and San Diego field offices and worked on successful high-profile public corruption investigations. In 2000, he was named chief of the bureau’s integrity in government and civil rights unit.

For starters, we increased our library of Police movies and television shows during the lightning round at the Perspectives on Public Service forum. Hawaii 5.0, Beverly Hills Cop, Lethal Weapon, Turner and Hooch, Law and Order, Magnum P.I, and Prime Suspect were all mentioned.

All three of the panelists are leaders in their respective departments and all three reached their positions through different career paths. While they work for different organizations, their careers are now intertwined due to the regionalization of crime and recent events such as the Clackamas Town Center shooting.

Onto what we learned:

Challenges in dealing with elected officials and/or management.