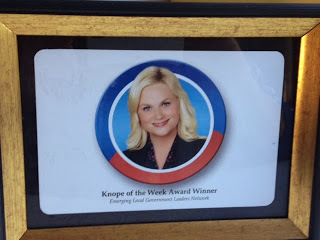 Rick Usher (LinkedIn and Twitter) is the Assistant City Manager for Small Business & Entrepreneurship and has been employed by the City of Kansas City, Mo. since 1985. He’s a guru on Google Fiber. He’s a historian on Cookingham. And he’s a master communicator on Twitter. And now, he’s the Knope of the Week. Rick first became involved with ELGL when we hosted a webinar on Google Fiber. (Hat tip to Mary Beth Henry, City of Portland for being the one to connect us with Rick.) Following the webinar, Rick contributed to the Cookingham Guidepost series, informed us about Google Fiber on Twitter, and then, last week hosted a lunch and learn at the Kansas City City Hall. At the lunch event, Rick took us behind the scenes of City Hall. We toured the Mayor’s office, council chambers, and the rooftop of City Hall. We wrapped up the visit striking our best Cookingham pose.

Ray Hummert, Kansas University, School of Public Affairs, Academic Advisor/External Affairs Director
“Rick was a great host.  Google, not previously having to interact with a city’s unique bureaucratic processes like permitting, faced a learning experience.  Rick and his colleagues in Kansas City have gently educated them on the regulatory processes.  Rick also articulated the need to be out in the community in order to bring the technology experience to the underprivileged who may not have access as well as “tech” innovators who are afraid of local government.  There is a learning curve for all involved.  Thanks, Rick, for a job well done.”
Jennifer Martin, City of Lenexa, KS, Licensing and Permit Supervisor
“I really appreciated Rick Usher’s willingness to share his experiences with Google with us! As a KC Metro jurisdiction that is also getting Google fiberhoods installed currently, it was interesting to hear about the relationship KCMO built and how KCMO was able to overcome some of the same challenges we face today. Despite the challenges, it’s encouraging to know that it is possible to complete the project and experience the fruits of the struggles in years to come!”
Kirsten Wyatt, City of West Linn, OR, Assistant City Manager
“Rick Usher is the perfect ambassador for KCMO.  He’s passionate about his work and his community.  We can all learn a lot from Rick and his positivity about his job and his city.”
Mike Ekey, City of Raymore, MO, Communications Director
“Rick was an incredible host for our Lunch and Learn. Not only is he passionate about Google Fiber and the future of Kansas City, but you could tell as he showed us around City Hall he is just as passionate about its past.”
Ben Kittelson, Guilford County, NC
“Rick Usher is the best tour guide and ambassador for Kansas City. His passion for the city and its tech community comes across in every interaction with him. When I was road tripping out to North Carolina from Oregon I got to meet up with Rick and he was the best host. He gave us a behind the scenes tour of City Hall, took us to one of the city’s tech incubators, and even to a great local burger place. Rick is a local government rockstar and well deserving of the Knope of the Week.”
Kent Wyatt, City of Tigard, OR, Senior Management Analyst
“Rick is everything that local government needs. He’s a leader not a follower. He knows the power that technology can have on local government. Most importantly, he’s never “too busy” to help. Thanks Rick!”