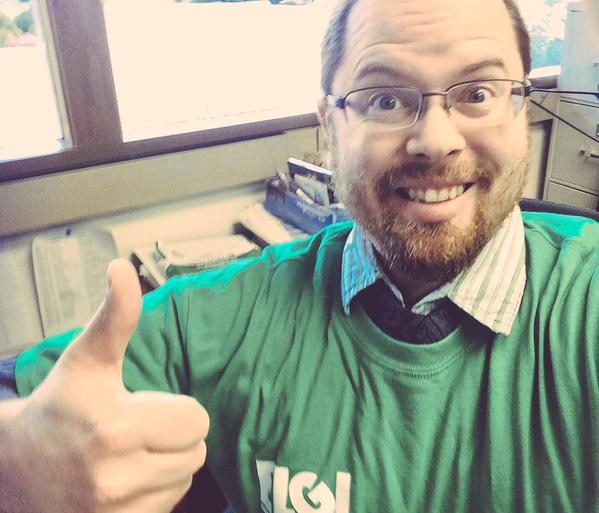 “One of my favorite examples of showing gratitude is done by a group who awards the Knope of the Week,” said Jefferson Smith during a 2014 Ted Talk.

ELGL leader Sam Taylor (LinkedIn and Twitter) has left the rain of the Pacific Northwest for the beaches of Northern California. Sam recently started his new position as the Morro Bay Deputy City Manager. He built an impressive four-year legacy while serving as the city clerk and assistant city administrator at the City of Ferndale, WA. Two years ago, Sam joined ELGL and made an immediate impact – serving on the NW ELGL Advisory Board, writing periodic articles, and connecting with various members through Twitter. We’re forever grateful to Sam for providing the below picture which has, and will, continue to be used every chance we get. We’ll also think it sums up Sam’s enthusiasm.

Julie Underwood, City of Daly City, CA
“I’m so pleased to see Sam join the ranks of those of us honored to be named Knope of the Week! Sam has a wicked sense of humor and his enthusiasm for public service is contagious!  I appreciate Sam’s honest opinions and creativity. The future of local government is bright with intelligent, hard-working leaders like Sam leading the way. Congratulations Sam!”
Kent Wyatt, City of Tigard, OR
If you’re ever tempted to say that you’re too busy, you might first consider everything Sam has balanced in the last year. Sam was working on an MPA from Kent State, working full-time for the City of Ferndale, serving on the NW ELGL Advisory Board, being a father and husband, and serving on the Whatcom County Planning Commission. He also served as my lucky charm in the Seahawks comeback victory over the Packers. California ELGL just joined a huge resource!

Patrick Rollens, Village of Oak Park, IL
“What can I say about Sam that hasn’t already been said? ELGL received a shot in the arm from the moment he joined the organization. His experience in the private sector – combined with his meteoric career since joining local government – is reflected in his unbridled enthusiasm for his craft. All of that from a millennial, no less!”
Luke Fretwell, GovFresh
“Sam brings incredible energy, positivity, caring and a ‘just do it’ attitude to his work and dedication to serving the citizens he represents. I can only hope one day he will be my city manager.”
Kirsten Wyatt, City of West Linn, OR

“Washington’s loss is California’s gain – and this includes CA-ELGL members.  Sam is a hard worker, great writer, and fearless social media user.  Sam has quickly emerged as one of the best and brightest at connecting, communicating and educating about local government.  The future holds great things for Sam and I’m proud to say “I watched the best NFL game of all time with him,” as well as “I worked side by side with him, to advance local government professionalism.”
Ben McCready, City of Rock Island, IL
“Sam Taylor has been a fantastic addition to the ELGL team! His columns and contributions always reflect a true passion for making a positive difference. Sam not only takes the initiative to identify creative and innovative solutions to local government challenges, but has proven himself a top notch communicator. To say Sam is enthusiastic and dedicated to local government would be an understatement. It’s been a pleasure to get to know Sam and follow his path as an aspiring leader.”
Bridget Doyle, City of Sterling Heights, MI
“Sam is full of energy and great ideas — and is truly an asset to ELGL. He is smart, funny and very easy to (virtually) work with when we’ve combined heads for a column. Sam’s transition from journalism to local government has been seamless. His passion for serving people is inspiring and I know he’ll do great is his new role in California!”