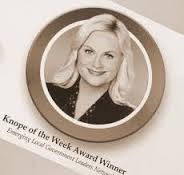 Cue the zoo jokes – David Donaldson, Lake Oswego (OR) assistant city manager, is leaving Portlandia for a greener pasture, the Woodland Park Zoo in Seattle. David will be missed. He was an early supporter of ELGL and has participated in a number of web features including The Assistant and Growing Up in City Hall.

David embodies the professionalism required of city leaders. He was unflappable through the staff transitions in Lake Oswego. He modeled an outside persona that all of us should remember the next time we face career challenges. The Portland area will miss his institutional knowledge and his uncanny ability to recite the nicknames of every Division I college. Cal State Fullerton?

While David will moving away from Portland, his professionalism and work ethic will continue in everyone who had a chance to work with David. ELGL thought about writing a haiku or rap about David’s legacy but we chose instead to gather comments from David’s colleagues.

David Donaldson is one of the most empathetic people in the profession.  He genuinely cares about other people, and he is a strong colleague and friend.  He has actively reached out to me to support me several times over the past 15 years, and I have always appreciated his counsel.  He is a calm, professional, compassionate force in our state, and we are going to miss him.  Of course, at Metro, I get to help run a zoo, so maybe I’ll see him!

I worked with David for 4 years.  He was my assistant when I arrived in Lake Oswego.  He and worked quite well together.  While a perpetually a nice guy, which is why he get along well with everyone, he could certainly play the heavy when called to do so.

We all have our quirks.  Here is David’s – he has the memory of an elephant and retains everything that he has ever read.  While not a quirk in and of itself, it is amazing how he is able to draw upon that knowledge and weave it into a conversation.

A diehard Ducks fan, music aficionado, dedicated family man, son of a city manager, well-traveled, and for whatever reason, has memorized every college/university colors and mascot. Good luck David on your new adventure.

David serves as a role model for those who want to pursue a career in local government. He has provided me with advice and guidance whenever I needed it. I can honestly say that if it was not for his mentorship and guidance I would have never wanted to pursue a career in local government. He exemplifies what all public sector employees should strive to be by always being humble, compassionate, and selfless. He is also a wealth of knowledge when it comes to music, little known facts, and college mascots. Lastly, he will single-handedly keep the print media industry alive with his mass collection of news articles and paper clippings.

As one of David’s early mentors and City Managers of the city where he started his local government career, it has been a pleasure watching him advance his professional career. It has been even more enjoyable to be a friend and watch his family grow over the past 30 years. In both areas David has been a model for others as he balances his personal and professional life. From the start of his local government career as an intern and then Assistant to the City Manager in Dallas through his private sector experience as an executive recruiter to his leadership positions in the city manager offices of Wilsonville and in Lake Oswego, he has provided exemplary services to his organizations and community and has always emulated the highest standards of performance and ethics. In Oregon he has not only provided leadership to his communities but also to our professional association serving in numerous positions and being an active member. I look forward to watch him as he follows his passion and interest through his new position in zoo management. Good luck to David and his family, I know his future will continue to be bright.

David’s legacy to the City of Lake Oswego and local government in Oregon is profound. In my case, he paved the way for my entry in city management with the Kincaid internship and subsequently supported me in the role of City Recorder. Through David I’ve learned to appreciate the players, challenges, and excitement of local government in Oregon. And, with everything from professional mentorship to local dining reviews, he has been incredibly generous with his time, energy, and interest on my behalf. We will miss him tremendously.

David is irreplaceable.  He has a massive heart and is fiercely loyal.  He will fight for those that deserve it. He is smart and creative.  He cares deeply about the community.  He is humble.  He has unparalleled integrity.   He will go out of his way for you.  He is upbeat and optimistic.  He sees the best in you, especially when you don’t see it yourself.  I am fortunate to call him my mentor.  Our profession lost a good one.

I met David many years ago when I applied for a position in his city, then Wilsonville, OR. And while we ended up not working together, we’ve kept in touch all these years. I’ve always enjoyed our conversations about how the city management profession has changed and how we’ve handled our unique challenges.  He’s very good at judging a person’s character and recruiting and supporting talent. I’m truly sad to see him leave our profession, but am excited that he continues to work in the nonprofit sector. The Woodland Park Zoo will be in good hands with his leadership.  We’ll miss you David – you definitely deserve to be Knope of the Week!

Anyone who knows that the Fighting Christians is the former nickname for Elon University is a friend of mine. David is knowledgeable in everything from local government to college mascots. He’s a rare individual who leads by his actions instead of idle words.

I had the pleasure of meeting with David on multiple occasions.  He is clearly knowledgeable and even gave me advice that helped guide me down my current path.  I wish him the best in his new role.

David worked for me for a few years.  David is one of the most thoughtful people I know.  He’s very bright.  He was always several steps ahead of me.  His greatest traits are his integrity, honesty and ethics.  He clearly sets the example through his behavior.  He’s a true gentleman.  The Seattle Zoo will really benefit from his presences.  All this in spite of his love for the Ducks.

I most appreciate David’s sense of humor and his good naturedness.  Whenever I would see David at a meeting or an event, I knew that I’d have someone interesting to talk to and learn from.  David also brings a keen understanding of managing people – his HR perspectives will be missed, and I am so pleased that he’s taking on another career challenge where he will continue to provide a great community service.

What a fascinating change of careers for David! I can’t wait to read a follow-up ELGL article about stories of his adventures at the zoo.  This is a loss for Lake Oswego and our profession.  We will continue to benefit from his lasting positive impacts throughout his career in local government.  I’m lucky to have worked with David and always appreciated his support and his extreme knowledge of random facts about music and college mascots. Knowing all of those mascots should come in handy to identify unique animals at the zoo!

David is, and will continue to be, a mentor for so many of us in local government.  He was my first local government contact in Oregon (I owe him for my job!), and will continue to be one of the first people I turn to whenever I need advice or guidance.  I’ve learned so much from him in the last 7 years, and yet, I know there is still so much more to learn.  His character, compassion, and genuine interest in people was inspiring and really showed through in the time he spent meeting with and supporting emerging leaders. Thanks David,  you will be missed!

David is one of those people that you know would be great to work for after only a couple of interactions. He is so approachable and easy to talk with. I think David is a great role model for people like me who are just starting out in local government. Good luck David, you’ll be missed here in Oregon!

The Assistant with David Donaldson, City of Lake Oswego

Growing Up in City Hall: Life as a City Manager’s Child with David Donaldson

Donaldson takes on a new role at city hall