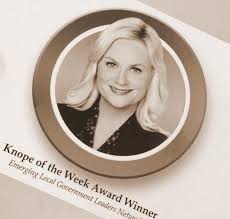 Our second Knope of the Week for 2014 comes from a field (the media) that makes so many in local government nervous. This week’s winner Jeff Mapes is an Oregonian journalist, author of the Pedaling Revolution: How Cyclists Are Changing American Cities, and political commentator.

Pedaling Revolution: How Cyclists Are Changing American Cities is a non-fiction book that gives a brief history of the bicycle from its start in the early 1800s, when it could only be afforded by the wealthy, through to the present.

Jeff Mapes has covered politics in Oregon since Ronald Reagan was running for re-election. He is a proud Westerner but confesses to enjoying a four-year stint as a Washington correspondent. He lives in Northeast Portland with his wife, Karen. They have two adult children.

What Did We Learn?

Jeff entertained the ELGL audience with tales of ballot initiatives, Trent Lott “jokes”, and the new gatekeepers. Below is a forum recap from our Twitter feed and #aMAPESzing.

You’re not allowed to work in Oregon local government if you don’t know what measure 5 is.

2014 “short” legislative session will be a test run for some ballot measures because the Nov elections aren’t too far off.

Umatilla Electric Coop bill related to renewable energy portfolio will also be a legislative issue in 2014.

@GovKitz support from #oregonbusinessassociation is a key component of his popularity.

Demographic studies of Oregon show a large group of “evangelical conservatives. This can make for a “fertile ground” for #teaparty conservatives. He notes that Clackamas County is evidence of this effect.

@SpeakerBoehner has almost drummed the #teaparty out of the party…. Has asserted his control.”

Solid challengers have emerged for Sen. Merkley. Race could hinge on what people think about health care in a few months.

Newspaper industry has been “disrupted” by the internet. Have to do more with a shift to online.

Reporters spend time thinking about what attracts readers online. A shift in thinking. My deadline is when I have enough to post something online. A big change from the old way of news.  Still has a chance at the @Oregonian to do in depth articles.

“There’s no such thing as a gatekeeper.” Multiple ways for a story to come out.

Politicians now must react and respond to “real” journalists and bloggers with cameras. Makes their jobs difficult.

@Oregonian reporters are now engaging with online comments. Part of the “business plan.

Sales tax is still a difficult sell to voters.

Here’s what our audience took away from Jeff’s remarks.

Was interested by how the role of the journalist is evolving to be more interactive with the reader, and the ever-growing value of immediacy.

My takeaway is that the ballot initiative process has been a movement for many Oregonians to voice their concerns about the future of the state.  Secondly, the Legislature seems to be the incubator for the leading political figures of the last 20 years or so.  Jeff made a great set of remarks about how blogging and Internet voices are being taken seriously from the mainstream news organizations.

There are many potentially ‘emerging’ Oregon legislators:

Jeff gave a great presentation, his discussion of the upcoming ballot measures and political races was knowledgeable and interesting. His take on the changing world of journalism was my favorite part, no longer do reporters have traditional deadlines they post stories as soon as they have enough information and they are instructed to engage directly with readers on social media, and even in the comment section of their own articles. Thanks for speaking to ELGL, Jeff!

The MPA graduate students from Portland State University that attended the ELGL lunch forum with Jeff Mapes came away quite impressed. It served as a valuable field experience by a trusted veteran in Oregon Politics. Big thanks to Mr. Mapes for his time. #aMAPESzing

For insight into Oregon politics there is only way place to go and that is Jeff Mapes. He’s a true professional of covering DC and Salem politics. His remarks on “gatekeepers” and the new newspaper deadlines was great insight into the new world of journalism.

Thank you, Jeff, for an excellent ELGL forum.  It’s always great to hear about the hot issues to expect in the upcoming elections.