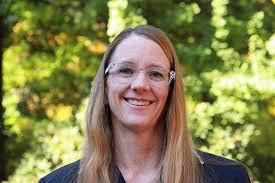 And the winner is….

Leah Treat
Director of the Portland Bureau of Transportation

ELGL joined forces with Oregon ITE to co-host a lunch this week with Leah and it was fantastic! Leah talked about her background, working  with Commissioner Steve Novick, and the move from Chicago to the West Coast. To thank her for an amazing lunch forum ELGL is awarding Leah the Knope of the Week!

She was appointed Director of the Portland Bureau of Transportation in July 2013 by City Commissioner Steve Novick after a nation-wide search. The Bureau has more than 750 employees, a combined operating and capital budget of roughly $500 million and manages more than $8 billion in public assets.

Treat came to Portland from Chicago where she was appointed by Mayor Rahm Emanuel to serve as Managing Deputy Commissioner of the Chicago Department of Transportation.

“DC and Chicago were certainly effective training grounds for Leah Treat before her post as Director of PBOT here in Portland. She comes off as effective leader who understands that making cross jurisdictional projects work take effort, awareness and relationships, as well as, the financing of course. Oregon is lucky to have her. Can’t wait to see her impact. Oh, and I love her MPA background too.”

Staff trickle down theory: how you lead, trickles down to your staff & how they lead. Set the standard, be the best. #lunchwithleah

“No matter what u think of your boss or current job, don’t burn bridges. Work hard, suck it up & start networking.” #lunchwithleah #ELGL

So incredibly inspired by a great presentation by @leahtreat on what it means to be a great leader. She should write a book. #lunchwithleah

“Leah was inspiring. Here leadership style is something that really impressed me. Even though PBOT is facing some tough issues Leah will be able to navigate the bureau through them.”

“Put the road back in a better condition than it was when you trenched it.” -Leah Treat perspective at #lunchwithleah — ELGL (@OregonELGL) March 18, 2014

“What impressed me the most about Leah was her preparation and thoughtfulness. For her presentation she gave valuable information about her career path, but the thing that stuck with me was her honesty about how hard work is what has gotten her where she is today. That’s an important lesson for all the Oregon ITE and ELGL members to take away. I would work for her in a heartbeat”

“As a leader, be the boss first, but the only way to gain respect from your employees is to have relationships with them.” #lunchwithleah — ICMA PSU (@ICMAPSU) March 18, 2014

“I enjoyed how honest and open she was about her career thus far and how she got to where she is now. It was inspiring to hear her journey. I also appreciated the feedback on work/life balance and the traits she sees as important in people in leadership roles. Also her views on how Portland differs from other political Cities she has worked in.”

#Pbot stole Leah Treat from @RahmEmanuel She’s not an engineer or planner but is known for her leadership. #lunchwithleah