Today’s Morning Buzz is brought to you by Rafael Baptista – connect on LinkedIn & Twitter!

In a past life, I spent 16 years officiating thousands of soccer games ranging from little kids who didn’t know where to run to the top college conferences and semi-professional games. I was recently reflecting on my prior experience with soccer and thought about the leadership lessons that I learned from being a soccer referee. In today’s Morning Buzz, I want to share two lessons with you: 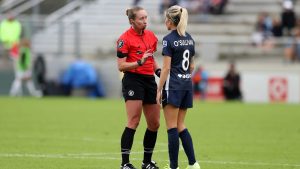 In soccer, from a referee’s perspective, most of the important moments in a soccer game occur in transitions when the ball is being passed from one player to their teammate. You have the potential for action where the first player is and where their teammate is at the same moment. Clearly, you want to be able to see both situations, but you are only one person so that’s not quite possible.

The solution is you learn to quickly assess the situation and understand what is going on and get a sense of what could happen in both places and focus on where you have the greatest likely hood of a problem and the biggest problem. Local government is very similar, we all have too many things on our plate at one time and can’t focus on them all at the same time with the same level of attention. We need to assess situations and determine where to focus our efforts quickly.

We all know that coaches and players like to argue with referees and get their way. Sometimes they are polite in how they do it but typically they are yelling and making not-so-nice comments. It’s easy to respond with “Coach one more comment and I will throw you out of the game.”

But what if the next comment isn’t so bad but still falls under your threat. Do you kick out the coach when it’s probably not deserved, or do you not kick out the coach and lose your credibility? Referees, especially at the higher levels, have to regularly assess how to handle situations and if they should give a threat or warning. Unless you are sure that you will follow through on it, don’t make a threat or warning. Instead of “Coach one more comment and I will throw you out of the game” maybe say “I heard you, coach, let’s move on” or something to that effect.

It’s the same in local government, or any workplace, if you are going to state if this, then I will do that, you need to mean it. Making a threat or promise and not living up to it will ruin your credibility.