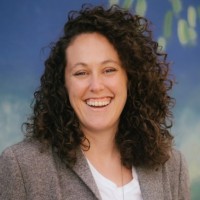 This article is by ELGL member Nicole Bare with Change Research. Here’s a copy of the survey data used for this article.

Change Research surveyed 941 Americans from March 18-30, 2021 about how funds allocated by the recently passed emergency COVID-19 relief package, the American Rescue Plan (ARP), should be spent. The bill gives state and local governments a historic $350 billion to respond to the economic fallout caused by the pandemic. 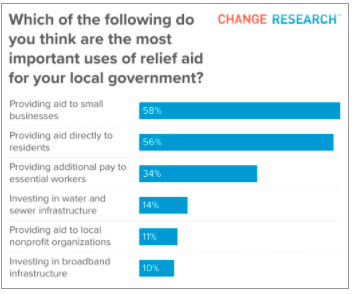 Investing in water and sewer infrastructure, providing aid to local nonprofits, and investing in broadband infrastructure fell to the bottom of the list for every subgroup at 14%, 11%, and 10% overall, respectively.

Change Research surveyed 941 residents nationwide from March 18-30. We used some or all of the following sources to recruit respondents:

Regardless of which of these sources a respondent came from, they were directed to a survey hosted on Surveymonkey’s website.

The survey was administered on behalf of Change Research, and conducted online by Change Research. Post-stratification was performed on age, gender, race/ethnicity, geography, 2020 presidential vote among voters, and education. Weighting parameters were based on demographic breakdowns from the Census and American Community Survey. That is, if a given age bracket or gender group represented x% of all adults, then that same group would be weighted to x% in this survey.

The modeled margin of error* for this survey is 5.0%, which uses effective sample sizes** that adjust for the design effect of weighting.

* We adopt The Pew Research Center’s convention for the term “modeled margin of error”(1) (mMOE) to indicate that our surveys are not simple random samples in the pure sense, similar to any survey that has either non-response bias or for which the general population was not invited at random. A common, if imperfect, convention for reporting survey results is to use a single, survey-level mMOE based on a normal approximation. This is a poor approximation for proportion estimates close to 0 or 1. However, it is a useful communication tool in many settings and is reasonable in places where the proportion of interest is close to 50%. We report this normal approximation for our surveys assuming a proportion estimate of 50%.

** The effective sample size adjusts for the weighting applied to respondents, and is calculated using Kish’s approximation (2).