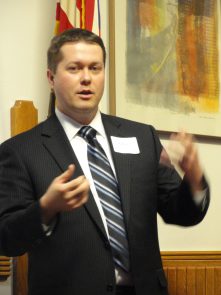 We’re back with the new “New Sensation” feature. We’ve updated the questions based on your feedback. You’ll now learn about the best YouTube videos on the web, read about gift ideas for the holiday season, and learn about the career accomplishments of our new members.  As a reminder, we developed this feature to introduce you to new ELGL members and as a way on connecting ELGL members with similar interests.

Robert Bruner’s local government management career began in October 2001 when he became the Assistant to the City Manager of Oak Park, Michigan. Among other duties, he served as the City’s Ombudsman and implemented a web-based citizen relationship management (CRM) system to reduce response time. Bruner earned a Master of Public Administration (MPA) degree and a Graduate Certificate in Economic Development at Wayne State University in 2004.

Bruner became the Assistant City Manager of Ypsilanti, Michigan in August 2004. There he directed the City’s Human Resources and Recreation Departments as well as the City’s information technology and public information functions. He earned a Graduate Certificate in Local Government Management at Eastern Michigan University in 2005.

Bruner became the City Manager of Birmingham, Michigan in February 2011. He lead the effort to consolidate a neighboring village’s emergency dispatch center with the City’s and install a new 9-1-1 system in 2012. In addition, Bruner also began teaching graduate courses in public administration in 2012.

Tell us about three of your biggest accomplishments.

(Complete this sentence) I feel old when I……..

get invited to interview via Skype or when a retired manager asks me, “Have you heard of ELGL?” and my answer is, “No.”

Tell us about two mistakes that you’ve made that we can learn from.

There was a time when I did not take care of myself emotionally and physically as well as I should have.

I confidentially applied for a new position in a nearby city while I was negotiating a new agreement with my current employer.  Circumstances beyond my control delayed negotiations and anonymous sources leaked information about the negotiations and my application.  I withdrew my application for the other position hoping to salvage the relationship with my current employer but the damage was done and they declined to extend my employment beyond February 13.  I may have done things differently if I knew then what I know now, so I hope others can learn from this experience.

Mustache Power: filmed in one of our City parking structures in Birmingham, Michigan

Blanche: “What This Town Needs” my transition theme song)

As part of being an ELGL member, we give you a chance to redo or change any part of your life. How would you use it?

(Note: My life is perfect, I am perfect, I would never change anything is not an acceptable response.)

I would spend less time worrying about pleasing others. You don’t need to please everyone all the time.  I would better handle other people being upset with me.

Our annual conference will be held in October 2014. Name three topics or speakers that should be included on the conference agenda.

(Complete these phrases) Best thing about the….

Today is…..that today was a good day and I have a feeling tomorrow will be even better.

Name two of your mentors and describe them in five words.

I can only name two? I hope I don’t break any hearts.

How did you hear about ELGL?

Fast forward one year, what will factor into your decision on whether to renew your ELGL membership?

The success or failure of Parks and Recreation on NBC will factor into my decision.  I will hold ELGL personally responsible for the future of my favorite television show.

Give us two ideas for attracting and retaining talented individuals to the public sector.

What questions should we have asked?

A: Butter and syrup, but the waffles must be gluten-free.

What one question you have about ELGL?

Where have you been my entire career?!

Presented by: Edward B. Koryzno, Jr. City of Ypsilanti