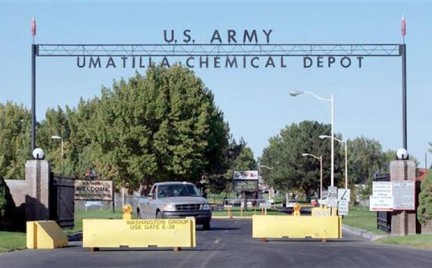 Timothy is drawn to public service, specifically in ensuring that adequate services are provided in an efficient manner, utilizing research and proven decision making processes. His short term goal is to successfully transition the Umatilla Army Depot through the BRAC process to state control. Timothy has a long range goal of becoming a city or county manager.

Three projects you are working on.

The first and biggest project I’m working is in the transition of 7500 acres of the former Umatilla Chemical Weapon Depot into a State of Oregon Military Department training facility, to be named Camp Umatilla.  This project would be a lot easier if the Army was done with it or the National Guard wasn’t using it already,  but both conditions exist.  We are maintaining all infrastructure support and contract requirements for both entities and are supporting the destruction and removal of the Chemical Weapon incineration plant.

A concurrent project is the support of the UMADRA, Umatilla Army Depot Reuse Authority, which was designated an implementing LRA this year.  This group composed of members of the county and port governments of Umatilla and Morrow, as well as the Oregon Military Department and Confederated Tribes of Umatilla are in negotiations to break apart land current held by the Umatilla Chemical Weapon Depot and transfer it to public use.

Finally, we are working on updating the current water supply system of wells and holding reservoirs which is pieced together with 10 inch wood stave pipe installed for main lines and concrete asbestos lines for smaller feeds.  The waste water treatment system needs to be replaced as well as it has started to fail.  Not too bad though considering everything was installed circa 1940.

In the last 24 hours, I was able to convince members of BRAC (Base Realignment and Closure Committee) that we needed more freedom in execution of their support contract to allow for maintenance within the facility.

So far, my longest meeting (outside the military) was a labor negotiation meeting which lasted approximately 10 hours.

Excluding family, give three of your career mentors.

When did I receive this questionnaire?

No, there are plenty of tips we can take from business such as efficiency and cost saving measure, but at the end of the day we exist to help people, not post profits

A bit messy, but only a few fast food bags and soda bottles

Worst CD you’ve ever bought. I think I’ve blanked that from my memory

Government can make everyone happy while spending less and less.

(Complete the sentence) In 2018, local government will be …………Re-designed and focusing on transparency via e-government.

(Complete the sentence) Before I die I want to……personally see the earth from space.

Hmmm, live long and prosper?  Seriously though, I think life is a gift either of divine intervention or cosmic coincidence, regardless we should try to make it a little better for everyone.

Finally, what question(s) should I have asked?