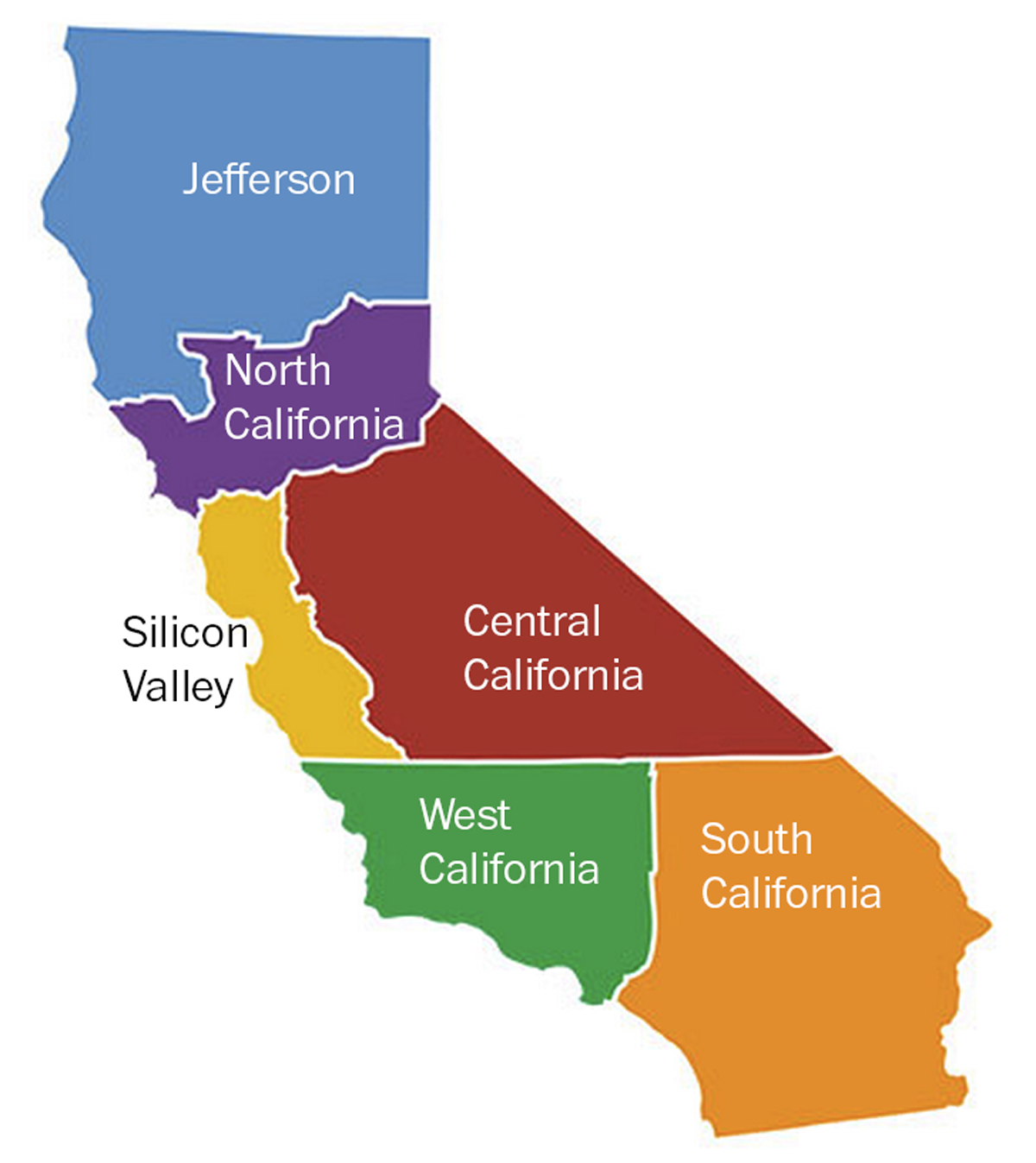 Stephen Harding returns with part three of his series on what makes California tick. He wraps up with a look at the recent Six Californias initiative.

Here are the first two entries – Part I: Making Civic Sense of California — Six or Otherwise and Part II: Governing the California Republic.

Dividing the State is certainly not a new conversation.  The recurring dialog pertaining to the State of Jefferson is proof enough.  But why create six Californias?  Why not two, three, seven or eight? Why split the California body politic at all? There is nothing new about the differences between the north and south or even the east and the west.  The supporters of the recently failed Six Californias Initiative say the State is too large and ungovernable.  The implication is the State’s existing political, legal and bureaucratic environment is too cumbersome, too lethargic, and too removed to adequately address the myriad of issues facing California today.  The Six Californias message—smaller multiple independent state governments would be more representative, more responsive, and more accountable.

These assertions maybe true predicated on thenotion of greater accessibility.  They may not be true absent adequate public, and private, resources.  At least for now, the suppositions of the Six Californias won’t be evaluated at the ballot box, in the courts, or on the legislative floors of Sacramento and Washington D.C.   The Initiative fell short of the required number of signatures needed to make it onto the next statewide ballot.  Yet this effort is reflective yet again of a strained, if not estranged, relationship between government and the governed.

So what are the reasons behind the reasons, for Six Californias? Is the immensity of the California Republic itself just too overwhelming thus underscoring how little control each of us has in determining its direction?  Is there an emerging reality that California is not living up to its larger than life representation as the land of equal opportunity?  Is it the struggle to balance the established form of a representative government with society’s need for direct democracy?  Is ideological, cultural, ethnic, and socio-economic diversity just to complicated to even establish a list of common priorities or to even plot a course? Is it to taxed? Is it too susceptible to the wide swings in the economy?  Is its penal, educational and financial systems too handcuffed by poorly written initiatives?  To one extent or another, I would suspect that the impetus for change is proportionally predicated on each, and many more, of these causations.
Yet of the proposed six states, one would have had the highest per capita income of any state in the nation while another would have had the lowest.   How could this be?  Why would it even be suggested knowing it would exasperate the already highly sensitive issue regarding inequality in America?
“The six states emerged as natural regions during the extensive research process before writing the initiative. It’s true that the new states will neither be the same size nor have the same population, but that’s also true for the 50 states that already exist. The populations of the new states will fluctuate, but the lines were drawn based on various statistics including population, demographics, value systems, prominent industries, income levels, water issues, geography, and other considerations.”

One could speculate that if the Initiative had followed the fiscal feasibility process similar to the one required for municipal incorporations it might have had a more discernable and plausible explanation as to the reasoning behind the proposed boundaries of the six.
It doesn’t really seem it was about the data.  I would posit that it was the primacy of local control, fiscal control in particular, that served as the impetus behind the Six California Initiative.

For both educational and entertainment purposes, we should consider watching the syndicated reruns of “Park and Recreation.”  We could come away with a much clearer understanding of the California psyche than just gleaning through the myriad of statistics and the anecdotal analyses of governmental experts, local gadflies, and partisan political pundits. However, I must confess, I am a fan of Jon Stewart’s Daily Show.  In deference to these parities’ contemporary view of government, we should not forget how we got here.

History is important. The transition from the sovereign association with Spain, to Mexico, to America is significant.  The accumulated vestiges of these arrangements along with the continuing patterns of domestic migration and international immigration are in California’s DNA.   Yet this is not the same place Hiram Johnson governed during the turn of the 20th century while ushering in the Progressive Era and the Initiative process.  It is not the same place that Earl Warren, Goodwin Knight and Edmund “Pat” Brown governed during the “let’s negotiate and get things done” era of the 40’s, 50’s and 60’s.  This was the unprecedented period of constructing California’s physical infrastructure and the adoption of California’s Master Plan for Higher Education.  Not to short shrift and other period, history is just that, history along with all of its cumulative causes and effects. The effort to subdivide the State into six smaller pieces is just one of the latest in a series of engagements that help all of us understand the historic and contemporary concept called California, even through its on-going cycles of droughts, fires and water wars.   In some ways its non-physical self mirrors its own topography.  At times, it is at the highest point in the continental lower 40 emulated by Mount Whitney.  At other times, it can feel like 282 feet below sea level on the floor of Death Valley.  Fortunately, it usually hovers somewhere in between.

A Closer Look at the Six

In the following weeks, six authors will undertake the process of further defining California within the context of the Initiative’s proposed six sovereign regions.   I would suppose that each will depict the unique characteristics of their respective geographic locations but will also underline their individual nuances and challenges of civic engagement, governance and local government management.  How governance in general is conducted constantly changes, especially when geographic, economic, and demographic differences can be so pronounced.   The same may even hold true between jurisdictions sharing common borders.  In any event, we are all in this together, whether in California or elsewhere.  Just remember Don Henley’s and Glenn Frey’s lyrics from Hotel California:
Last thing I remember, I was running for the door, I had to find the passage back to the place I was before, “Relax, ” said the night man, “We are programmed to receive.
You can check out any time you like, but you can never leave! “