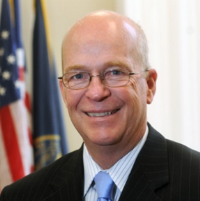 College Football and Local Government. We continue our series on the relationship between local governments and universities. Tom Casady, Director of Public Safety, joined the podcast to talk about the game day atmosphere in Lincoln, the preparation it takes to get ready for the influx of fans and his favorite memories. On Saturdays enough people come to Lincoln to make it the third largest city in the state. Prior to being named Public Safety Director, Tom was the Lincoln Police Chief from 1994-2011.