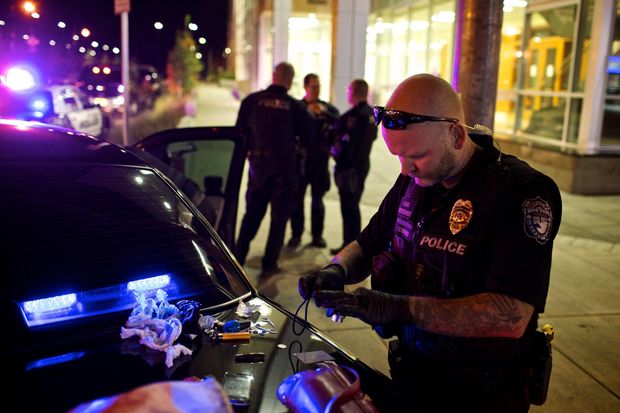 In response to direction from the Santa Ana City Council, this past week I assisted with preparing an informational report relating to police oversight. In today’s Morning Buzz, I’ll share some of the research I gathered.

What I’m Reading – Civilian Oversight of the Police in Major Cities, a surprisingly digestible article published by the U.S. Department of Justice in 2018 and commissioned by the Office of Community Oriented Policing Services. If you’re interested in learning about how cities across the United States and Canada approach police oversight, I encourage you to check it out.

What I’m Doing – I came into work early today to catch up on some outstanding assignments. Notably, I’m working with my city manager and a local university to deploy COVID-19 serology testing and data modeling. Wish me luck!

Across the United States, at the federal, state and local level, debate is underway regarding law enforcement. This broad conversation ranges from social justice, accountability, the role of the police, funding levels for law enforcement, the laws, policies and procedures governing police departments, and oversight.

About the Santa Ana Police Department

The mission of the Santa Ana Police Department (SAPD) is to deliver public safety services to the community with the utmost professionalism and integrity. SAPD’s values act as the guideline for the discretionary use of police powers and are the basis by which employee actions are evaluated.

SAPD is committed to creating and maintaining a safe, secure, and enjoyable environment for community members and visitors alike. SAPD strives to provide fair, courteous, responsive, and effective service equally to all people while observing each individual’s dignity and worth. Therefore, it is the policy of SAPD to accept and thoroughly investigate all complaints of alleged misconduct by any member of the department. The complaint process has two goals:

To that end, a Citizen’s Complaint Form is available on the City of Santa Ana’s official website.  If citizens cannot access the internet, complaint forms are mailed out or hand delivered to the individual wishing to file a complaint.   Below is the process by which individuals submit complaints of police misconduct:

While the definition varies by source, a police oversight commission is a form of oversight of law enforcement officer conduct. The purpose of these oversight systems is to improve law enforcement performance and accountability.  A leading scholar, Samuel Walker, distilled best practices into a concise and practical list designed to facilitate police reform (Walker, 2005)[1].  These strategies are based on the 2001 Department of Justice report, Principles for Promoting Police Integrity.  These include (a) use of force and other critical incident reporting; (b) open and accessible citizen complaint procedures; (c) early intervention systems; and (d) external citizen oversight.

Any successful model must address the rules, policies, norms, and culture of the police department.  Research suggests that police misconduct is often driven by the ethos of the police organization (Armacost, 2004, p. 456)[2]. In 2019, SAPD leadership, working with members of the community and co-facilitated by the Orange County Human Relations Commission, revised the Department’s Community Oriented Policing Philosophy (which clearly emphasizes accountability, integrity and transparency); and established a 2019-2024 Policing Strategic Plan.

This model consists of members who review police misconduct investigations to determine whether they were conducted appropriately and adequately.  Members agree or disagree with findings of the internal affairs investigation and may make recommendations. This type may also provide proposals or recommendations regarding departmental policies.

Example: A Chief’s Advisory Board is created to act as a community resource for the chief in forming strategies, developing community policing priorities, increasing public awareness, and transparency.  The board is intended to provide a forum for discussions concerning community concerns and its goal is to have a broad spectrum of viewpoints represented.

Advantages:  Boards or commissions without investigatory powers can produce findings more quickly than an investigatory model.  This model also provides an opportunity for residents to be directly involved and have input on policy issues.

This model consists of assigned members who have the additional authority to investigate complaints separately and externally from the police department. This model is generally seen in organizations who have a history of serious patterns and practices of misconduct. The board or commission may make findings because of such investigations and make specific recommendations to administrators regarding discipline and/or policy.

Advantages:  Can provide increased public confidence in misconduct investigations and give the community a greater sense of inclusion.  Provides additional oversight as investigations and findings come from an agency other than the police department.

Disadvantages:  Members must be highly trained and willing to spend a considerable amount of time to conduct fair, unbiased, and consistent investigations.  Substandard investigations can create significant problems for the community and police department.  The board or commission must have the ability to compel evidence (subpoena) and the ability to hear testimony from officers.  Would require significant and adequate funding to function properly.

Although the models set forth above depict the two general types of oversight board/commissions, there are numerous variation between those with investigatory power and those without. There are civilian review boards, monitors, auditors, and inspectors general, among the variations. The “best” approach continues to be a subject of debate among scholars and practitioners. In part, this is because so many different factors influence what particular agencies and communities need and can sustain. A variety of police oversight classification systems have developed over the years because of the wide variation in approaches adopted by communities. The National Association of Civilian Oversight of Law Enforcement (NACOLE) adopted a system developed by Samuel Walker in 2001 with some modifications of their own. NACOLE places police oversight bodies in one of three classifications:

Since the 1970s, more than 200 police oversight commissions have been established throughout the United States. For information that is more detailed please see Exhibit 1 for a report published in 2018 by the U.S. Department of Justice’s Office of Community Oriented Policing Services entitled Civilian Oversight of the Police in Major Cities.  In order to better understand how police oversight plays a role in local law enforcement in California, a summary of police oversight bodies in select cities is provided in Exhibit 2. Civilian oversight programs vary significantly from one city to the next and even within the general categories described here, and some communities deploy police oversight commissions that incorporate more than one characteristic of each of the models.

In addition to the flexibility of the makeup of each police oversight commission, variability also exists among the costs associated with each. Research of a handful of cities indicate that the models with full investigatory power requires the greatest amount of annual funding; whereas, non-investigatory power models that serve to monitor require the least.

Comments and Direction from the City Council at the September 15, 2020 Meeting

If you have any questions (or tips) for me, let me know!