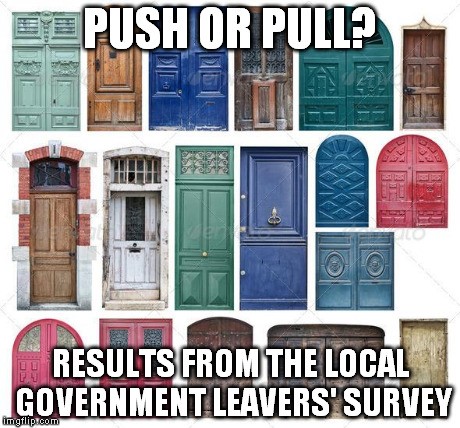 This is the next installment in Kim Sandoval’s “Push/Pull” study.  Kim surveyed people who had left the local government workforce.  She hopes to learn the reasons why people leave, to tease out some of the possible impediments to achieving more diversity in local government leadership.

When we look at the 13% issue – that the number of women in local government leadership positions has not changed from 13% in 30 years – it’s a natural reaction to ask why. For those of you reading Lean In with the ELGL Book Club, you’ve probably already come across her allusion to the chicken and egg dilemma of women in leadership. In my current workforce development role, I’m well aware of the work that individuals need to contribute in their own success. Each public servant, regardless of gender or role, has a unique calling and story to tell. However, my sociology background tends to pull me toward the ‘egg’ side of the question. If there are thematic training or organizational trends that are obstructing changes, we have to explore those and examine solutions at the same time women strive toward leadership in local government.

I’ve found the responses from the Push/Pull respondents (local government leavers) to be very interesting. My hope is that you’ll feel the same way. They’ve supplied us all with feedback about their personal experiences in local government and their reasons for choosing a new path. As I said previously, since we only received 135 responses, we need to remember these answers only apply to these individuals. However, it provides a starting point for our discussion, so let’s see what they have said.

In the survey, the respondents could choose more than one answer. On average, respondents chose 2.1 answers which is why the number of responses in this category is so high. This illustrates that a career change is not always motivated by a single cause, although nearly 48% of our respondents did only provide one answer to the ‘Why did you leave’ question.

When we look at all responses, the number one answer is that their reason for leaving the field of local government was for increased financial or benefits compensation. The second response was to pursue other career interests while the third answer was burnout. I invite you to review the attached chart and consider your own experiences; do the responses surprise you? Or do they affirm things you’ve heard from colleagues?

There are two responses included in this chart that were not part of the provided responses. Those are ‘other: lack of advancement’ and ‘other: political’. These two comments appeared frequently in the open ended responses; for those, I have coded responses to illustrate these opinions at this higher level.

Although the higher level observations are interesting, examining them in closer detail provides more insight about our respondents. Because of the variation in our subsets (gender and level served), several of the following graphs are reported as a percent of the subgroup (gender or role served) rather than pure values. This helps to compare between the groups. I’ve also organized the following charts in the same order as the one above for ease of comparison. Please note that respondents that did not indicate gender are not included.

If we look at reasons, by gender, for leaving local government there are variations. Both women and men responded in the mid 20% range that their reasons for leaving local government were related to compensation. However, if we look at the highest response by gender, male respondents’ number one answer (34%) was to explore other career interests and the second was increased compensation (23%). For women, the number one response (29%) was issues with leadership team. Their next reported level was 25%; female respondents reported both burnout and increased compensation at this level, followed very closely by work/life balance at 24%.

It’s important to review these responses not just by gender but also by level served. In a review of the reasons left local government by last level served, the work/life balance bar is the highest single response. Responding department heads reported this being their issue by over 40%. This was also the leading indicator for assistants to the CAO, although at a much lower level (20%). The overall second highest reason indicated (mid 30%) is both financial benefits and other career interests reported by respondents that had served at the ‘other’ level of local government. Issues with the leadership team were an impetus to leave for Assistant Administrative Officers while CAOs reported both burnout and council issues – all in the low 30%.

It’s interesting to explore the responses more closely and look at both gender and level served in relation to their answers, to see more detail in the respondents’ answers. The chart is provided with the caveat that the responses are completely anecdotal because the pool of respondents is so low. Since we allowed for multiple responses, the number of respondents is particularly low when we subset the answers in this way. The graphs related to their reasons for leaving indicate some interesting trends. If we review the respondents this way, both female and male AAOs reported difficulty with leadership teams. The next largest indicators show that work/life balance issues were high for both female department heads and female assistant to the CAOs while the responding female CAOs reported burnout to be a concern worthy of further exploration.

40% of the respondents to the survey reported that they’d last worked in local government at some ‘other’ level than those provided. In the spirit of Karen Pinkos’ “More than Just a Number” article, we need to also review the responses of these other government leaders. If we look at their reasons for leaving by gender, we see that this group chose ‘other reasons’ that motivated them to leave their last local government post. If we combine the answers of males and females, we see that compensation and other career interests were strong motivators for them to leave.

If we measure the reasons for leaving by role served and time served in that governmental role, our respondents and responses decrease further. However, we need to explore this issue briefly in case the reasons for leaving are tied more to the length of time which the respondent had served. These numbers are so small that we cannot generalize to all local government leavers but it may be worth further review to see if the variety of responses we see below would also occur in a larger survey population.

My final article about our Push/Pull survey results will focus on where these local government leavers are today and the feedback they provided on local government service. I hope you’ll check back in the coming weeks and see if this group of respondents would return if we were to open the door and invite them back.