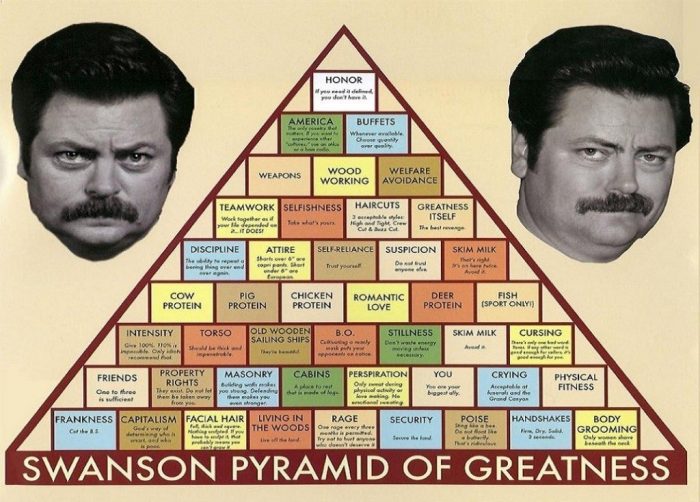 It’s been a long week, the uncertainty and craziness at the national level has definitely gotten to me this week. Hard to believe it’s only week one… More about that later on, but one of my favorite ways to cope so far has been old episodes of Parks & Rec. Especially seasons 3 and 4, they really hit their stride around then. This week I watched the episode where Ron coaches a basketball team and tells them about the Pyramid of Greatness, safe to say that poster may be in my office soon.

This week I finished a book that I would highly recommend. The Underground Railroad by Colson Whitehead. It’s a telling of a runaway slave’s story from Georgia through the south and beyond. Whitehead is a great storyteller and the voice of the characters come through in a way that it sounds like how someone would tell a story.

Fair warning, it’s not exactly a light read but it’s powerful and challenging. One of the cool features of his narrative is that the “underground railroad” becomes an actual train system hundreds of feet underground, across the country. Built by the people “that build everything in this country” as several characters point out.

Its definitely worth checking out from your local library (shout out to the Chapel Hill Library for providing mine) and I know it was nice for me to have an escape into fiction this week.

Podcast: I’m going to feature several episodes of GovLove this week later on in Kittelson’s Corner but Pod Save America has become essential listening in the last seven days. I think I’ve mentioned them before, but the podcast is a collection of Obama administration alums, from the speech writing and communications departments, who discuss the current news of the day and interview politicians, activists and journalists. Since the election they’ve also had a bent toward activism, what you can do to make a difference and impact the federal government. Take a listen, I definitely enjoy their conversations. Start with this episode, former Secretary of Labor Tom Perez comes on and it’s a great discussion.

Music: I have been switching between two extremely different musical vibes, Migos’ new album Culture and Mandolin Orange, a folk/bluegrass duo from Chapel Hill. I’ve talked about Migos before, the whole album lived up to the singles – just check it out already. But Mandolin Orange just relaxes me and makes me smile. The write beautiful lyrics and great bluegrass instruments that make for some great chill music. Anyway, take a listen and let me know what you think.

Couldn’t have said it better myself. This came out in the middle of the Women’s March last Saturday and I agree, if you’re interested in making a difference or wanted to work for the Feds and can’t because of a hiring freeze, come on down. We want and can use all the great people we can get in local government.

A Local Response to Trumpism

Elections: This week our new President among many other things, attacked voting rights. Sticking to the lie that millions of people voted illegally for Clinton (but somehow not in states that mattered) keeping him from winning the popular vote. His claim is that voter rolls are not being maintained properly and people can vote multiple times, this is also based somewhat on a random story told to him by a German golfer (the truth is stranger than fiction). Let this be a somewhat regular reminder that elections are administered at the local level. When he attacks voter rolls he attacks local governments, in most states Counties administer elections, and do a damn fine job of it.

Take a listen to our GovLove episode with Tim Tsujii, the Elections Director of Forsyth County, NC. He does a great job detailing all that goes into administering elections.

Public Sector Workers: Also this week came a freeze on hiring for the federal government. This goes hand in hand with a myth that somehow the federal government workforce has dramatically increased in size (spoiler: it hasn’t) and local governments are in the same boat, many are not getting back the positions they lost in the recession, at best it’s stayed flat. What we should be doing instead of a hiring freeze, is attracting a new generation of passionate public servants to all levels of government.

Take a listen to this GovLove episode on attracting millennials to government (sorry the episode was from before we banned the M-word). I talked about what it takes to attract and retain people in government with Phillip Joyce from the University of Maryland and Governing Magazine contributor.

Refugees: For this last one I don’t have a GovLove response but I can’t not mention it. The president signed an order keeping refugees from certain countries from coming into the US. Just read the process that these people have to go through before being able to come to America: How does the refugee vetting process work?

In Denver, CO after an enormous apartment building boom, rents are dropping for the second straight quarter. It’s a fascinating look at creating more affordable housing, just like they taught us in Econ 101 – more supply creates a lower price. Anyway check out the article: