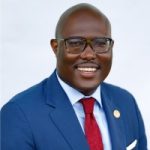 Mayor Scott Jr. has breathed new life into the City of Little Rock. With great opposition, he continues to reach all the goals he set forth in his platform to get elected and much more. Mayor Scott Jr. promised innovation to be a welcomed function of the New Little Rock and he has pressed the Department Directors at every turn. He has ensured we are operating in a fiscally sound manner, reaching the underserved, offering new opportunities for health and wellness internally for City employees and for residents alike. He is on fire, passionate about his City and opening doors for underutilized vendors and suppliers and is making sound decisions based upon data and the voters’ needs.

As the first African American elected Mayor of Little Rock, Mayor Frank Scott Jr. is focused on improving Little Rock and bringing all residents together in peace. He had a daunting task when he was elected, and he has remained steadfast and moving forward despite threats of violence. I admire his gumption, knowledge, patience, maturity and love for the City of Little Rock. I pray he can win again so more of his influence will be embedded into the City functions, policies and procedures-change was needed and is happening with him at the helm.