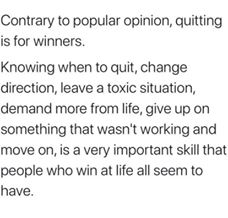 Today’s Morning Buzz is by Kirsten Wyatt. Connect with Kirsten on LinkedIn and Twitter.

I’ve long had a fear of quitting anything – I’ll continue reading a bad book I’m not enjoying, I’ll watch a movie until the end even if I don’t like it, and I’ll follow through on things that make me miserable.

That is, until last Friday…

Here’s the backstory: I stepped in to chairing a PTA social event for my daughters’ school. No one had volunteered for the chair role and I felt guilty that the event might not happen if I didn’t share my time. It’s a really easy event to organize and since I do so much event planning for ELGL, I knew it was a job that I could easily handle.

Kent discouraged me from doing it because my prior work with the PTA has been frustrating, but I was convinced that this would be different. But after two different situations where the principal censored my communications about the event, I quit the chair role an hour before the event.

As you can probably guess, I cried my eyes out on Friday night. Kent was kind and didn’t say “I told you so,” as much as he probably wanted to. He bought me wine, assorted stinky cheeses, and takeout. So, I spent the weekend reflecting on the concept of quitting, and rethinking the cliches about how quitting and winning.

Quitting something that wasn’t a good fit for my personality and skills made me think more about the types of organizations that I do want to be part of and contribute to.

I currently volunteer on other boards and those are great fits for me. I believe in the organization missions, and I really like the people who I serve with.

So while I’m sad I had to quit one volunteer opportunity, I’m focusing on the importance of fit, especially for something that is an extracurricular activity.

Part of the reason Kent discouraged me from reengaging was that I’ve only had negative experiences with the projects I’ve worked on – a lot of micromanagement, gossip, and a lack of understanding of technology.

It was painful in the sense that even the simplest tasks were mired in bureaucracy, so many emails (SO MANY), and a “we’ve always done it this way” mentality. And so to step away from that “pain” is also something I’ve been reading about related to quitting.

I’ve previously thought about quitting as something that you do when you can’t muster the strength to carry on. But when quitting means stepping away from something that’s painful or untenable, there’s strength in that decision.

Not Worrying About What Others Think

This is probably the biggest concern I’ve had since I quit – what must other people think of my decision? Do they think I’m a perennial quitter? I don’t have a way to share what really happened, so were other people angry that I left them in a lurch that evening?

Many of us worry about how we’re perceived and the decision to quit something just heightens that worry even more. A friend asked me two questions over the weekend to reflect on:

I’ll always be someone who carries on – it’s part of who I am. But my experience with quitting something that wasn’t the right fit for me has given me a lot to think about and has allowed me to be less judgmental about quitting things that aren’t right.