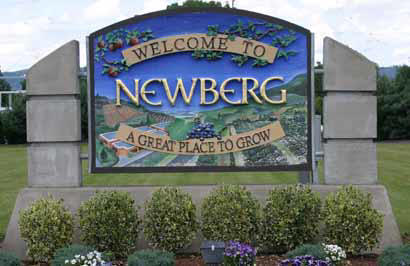 This column has featured an in-depth look behind the headlines of topical local government news. Previously, we have highlighted the Hillsboro Police Chief recruitment, the Whitehorse City Council commercial, the Deschutes County property tax fairy, and the impact of Pharell’s “Happy” video on local government. Today, Lee Elliott discusses his experience an interim city manager and the decision to eliminate the assistant city manager position from the City of Newberg, Oregon FY 14-15 budget.

Lee Elliott has served as the interim city manager for the City of Newberg, Oregon since August 2013. Lee has professional experience as city manager for Mount Vernon, Texas; and public works director, human resource director and special projects manager for Texarkana, Texas. He has served as chief administrative officer for the City of Mayflower, Arkansas, planning & economic director for Lowell, Arkansas and municipal consultant for multiple cities.

Background Check on Newberg, OR

Some of you may have learned about Newberg, OR during “The Bachelor” in 2010. Tenley Molzahn, one of the contestants, grew up in Newberg and brought “The Bachelor” to Newberg for a hometown date. Herbert Hoover, 31st President of the United States and Mindy Duncan, Miss Oregon Teen USA also have Newberg roots. Herbert Hoover moved to the city in 1885, to live with his uncle and aunt after the death of his parents and was one of the first students to attend his uncle’s Pacific Academy. The home has been turned into the Hoover-Minthorn House museum.

Newberg (population: 22,110) is in Yamhill County and is the second most populous city in the county. It was incorporated as a city in 1889. GThe city also is home to George Fox University, Oregon’s nationally recognized Christian College, and a new campus of Portland Community College opened in fall 2011. Newberg was the first community in Oregon to hold Quaker services.

Rest of the Story

Ben: First of all, describe your career path and how you landed in Newberg.

I have been fortunate enough to work in three different regions of the country, and three different states.  Oddly enough, I  wanted to experience working and living in Oregon for a long time, and fortunately for me, I was offered the assistant city manager position in Newberg.

Give us the three career accomplishments that you’re most proud of.

This is a difficult one!

The first that comes to mind is what we were able to perform in my last job as Mount Vernon (TX) city manager. I took over an organization which was floundering and facing major financial challenges.  In my four and a half years, we were able to do some amazing things including,

I would consider another accomplishment stemmed from my time consulting for Texarkana, Arkansas.  If you are familiar with Texarkana, it is two different cities in Arkansas and Texas.  State financing laws have steered economic development in major ways.  Being reliant on sales taxes in both states, retail development is very important.  Unfortunately, Arkansas financing laws steer retail and commercial development to the Texas-side. While consulting, I assisted in generating a TIF district which has generated some major development for the Arkansas-side, and assisted in attracting some major developments.

The third will be discussed below and how we have dealt with the Newberg general fund structural deficit.

Talk about the biggest challenges in moving from Texas.

Culturally, I love it in Oregon and the Newberg area.  The Willamette Valley has an amazing year-round climate.  My dogs and I love the outdoors here. In Texas, because of the heat, you are pretty much limited to two months where you you can only go outside!

The lack of a sales tax is has been a difficult transition.  In the South, where consumption taxes are used more, I knew it was the life blood of our cash flow.  After experiencing Oregon city government finances and its reliance on property tax to fund the general fund, I have a new respect for consumption taxes versus property taxes reliance!

Describe the last year in Newberg and how it impacted your career.

Wow, I believe our organization and I have grown immensely in a positive way. Unfortunately, the circumstances which put me in as the interim city manager were not very positive.

The initial public relations situation was a first for me.  I had dealt with flooding, train explosions, tax increases but not anything like this.  I believe our team of 180 employees developed and handled an unplanned transition amazingly.  For eleven months, we have moved in a positive direction.

After five months into my eleven month tenure, I received our mid-year financial analysis and we generated our five-year financial forecast.  Through these reports, it become apparent that the recession had uncovered a general fund structural deficit which had been hidden due to large amounts of growth pre-Great Recession. The City had not properly adjusted to account for this in the last three fiscal cycles.  Consequently, we were facing, within a two year period, having to use half of our General Fund reserve, and the deficit was still exponentially growing.  Needless to say, this was serious!

So in January of this year, we were forced to begin a mid-fiscal year dramatic adjustment plan.  We were able to develop a game plan with our councilors, department heads and financial staff which I believe will assist the new city manager with generating a sustainable general fund recovery without severely reducing services.

Talk about the events leading up to writing your position out of the budget.

There are limited general fund financing options in Oregon.  With Newberg’s general fund facing a structural deficit, and not many ways to close it without affecting services, this forced me to think differently.

My position is financed approximately 40 percent in the general fund.  My position was generated to provide broad assistance to the city manager and primarily to fix our public works situation.

As for my other assistant city manager duties, I felt that they could performed by other current positions. This is possible due to restructuring of general fund areas while I was the interim city manager.

When it comes down to it, there are two primary reasons I decided to work in the public sector:

In my opinion, the assistant city manager had become a “luxury” and could be eliminated to reduce the 8.3 percent structural general fund deficit.  To help from reducing other positions, I viewed more primary service based, and to help keep another employee here who desired to stay longer term in Newberg, I believed it was correct to lay myself off and to not fund my position. If I were in the private sector, this would be a normal action.

Play Devil’s Advocate; give us the argument for keeping your position in the budget.

Our community is growing. The assistant city manager position could be used to assist the new city manager with special projects, thus freeing up the city manager’s time to spend planning for the future growth in Newberg.

Three tips for others who find themselves in an interim city manager position.

First,  try to keep the organization as stable as possible.  Unless things are in a dysfunctional condition, meet with your council and see if you need to be more of a “place holder” or whether you need to target areas in need of a quick fix.

Do not try to make a name for yourself performing creative things.

Make sure you and your department heads meet frequently, because you are only as good as your executive team.

If one of our readers is applying for a job in Newberg, what should they know about the area.

First, Newberg is in a beautiful part of the state.

Second, Newberg is a very neat rural/suburban moderately growing community.  If you like the large city, Portland is 25-miles away, and you are in a beautiful rural setting.

I do not have any children (except for my two Dachshounds, Oscar and Mayah and I keep trying to get them on our insurance!!!!), but this community is an amazing place to have a family.  Our mayor and city council are very pro-employee, which is truly a positive.

I am going to spend a few months assisting a Central Arkansas community I consult for with their economic recovery.  In late April of 2013, a tornado destroyed approximately a third of the community and a large portion of their commercial development.

The community is not too far from where my family lives in Northeast Texas, so I will be able to see them more frequently.  During the next couple of months, I am going to decide whether to continue in the public sector or go into the private sector and start a new career in finance.