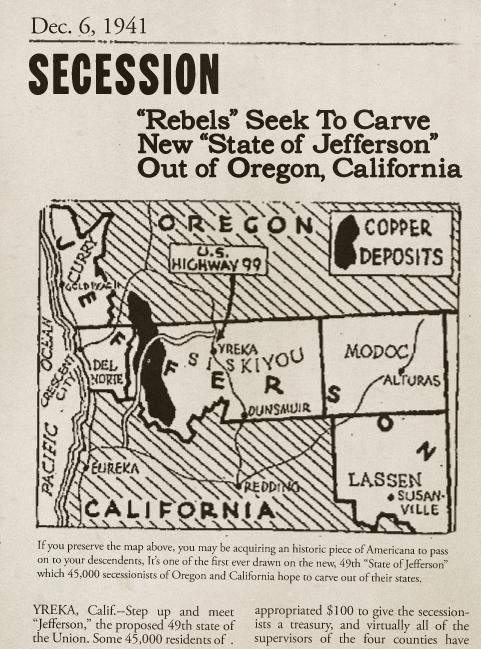 Dr. Steve Harding introduced our mini-series by explaining the history of the Six Californias movement. We now embark on a detailed look at each of the six areas and what makes them so unique that they think they need their own state.

The State of Jefferson

Thanks to Stephen Harding for kicking off an exploration of the enigma that is the State of California.
I have the pleasure of beginning our tour of California’s different “states.” Although we’re working north to south geographically, it’s fitting that we start with the State of Jefferson, because Jefferson is where the notion of splitting up California has been most actively pursued over the past 70 years. After all, Jefferson is one of only two of the proposed six Californias that does not include the name “California.”
The State of Jefferson is an idea that has been around since 1941. It was originally conceived as a combination of counties along both sides of the California/Oregon border. The idea has morphed several times over the years, with recent political activity focused across all of the “real” Northern California.
That’s one of the first key features to understand about the whole idea of multiple Californias: this is a BIG state. Non-Californians and Southern Californians are always stunned when I tell them I live six hours north of San Francisco. “But San Francisco is Northern California,” they protest. “Are you in Oregon?” No, I assure them, I’m still two full hours from the border. Moreover, I say, look at a map: San Francisco is the middle of the state.

Remoteness is not just geographic, but psychological as well. The basic idea of Jefferson is that the rest of California (or Oregon) – as represented by the political machinery in Sacramento (and Salem) – just doesn’t understand our rural, remote, resource-centered lifestyle. In fact, the flag of the Jefferson movement has two X’s representing the “double cross” of a political system that doesn’t represent the region’s interests.
Disagreement over the use of resources is at the root of Jefferson’s schism with the more urban areas of California. The “double cross” symbol of the flag is on a gold disk representing gold panning imposed on a green background representing the region’s forests. Jefferson’s history is of connection to resource industries such as mining and timber. And this is the part of California that has water – even in the midst of a drought, the reservoir providing potable water to Humboldt Bay is 100% full. But we’ve seen what happened to Owens Lake and we have experienced water diversion from the Trinity River, so we are deeply suspicious of the designs of those further south on this important resource.

One of the biggest challenges facing Jefferson is chronic unemployment and lack of new job opportunities – which many Jeffersonians blame on the uninformed environmentalism of urbanites that has generated over-regulation and contributed to the loss of jobs in the timber industry. Other issues that plague Jefferson include poor health outcomes, widespread marijuana cultivation that damages watersheds with unregulated grading and pesticide usage, and poor transportation access.
But while Jefferson has its problems, it also has many charms. We laugh at the traffic congestion endemic to other parts of California. I relish bragging to former Bay Area colleagues about my seven-minute commute to the office (since I live outside of town) and faux-whining about the “rush minute” that threatens to stretch it to eight whole minutes. Jefferson is also home to some of California’s most iconic images including old-growth redwood forests, Mt. Shasta and well-preserved Victorian architecture.
The best way to learn about a region, of course, is to experience it yourself. Come visit (we could use the transient occupancy tax revenue)! You can find tourism information here: North Coast and Shasta Cascade.

Secession brews in the ‘State of Jefferson’

Jefferson: a state beyond but within our border