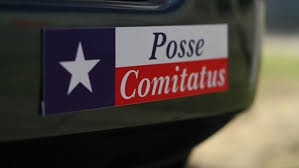 Stephany Juneau (LinkedIn) received a Master’s degree is in Public Administration with a concentration in Emergency Management and Homeland Security at the University of Colorado, Denver. Stephany conducted her capstone project on the Sovereign Citizen Movement. The following is part of Stephany’s capstone project.

Sovereign Citizen Movement: Learning from the Past

The sovereign citizen movement can be defined as individuals or groups who believe in government conspiracy theories and therefore do not abide by federal, state and local laws and regulations. This ultimately manifests in individuals committing acts of violence, paper terrorism, scams, tax fraud, filing of bogus liens and other fraudulent behavior.
The United States as a whole has seen a steady increase in domestic terrorism over the past eight years. This increase has been due to many factors including the sovereign citizen movement. The current resurgence has transformed into a formidable movement and sovereign citizens may now turn to violence and other harassment-type tactics in order to evade governmental laws.

During the 1970s, a white supremacist group named the Posse Comitatus created an ideology that has become the foundation for the sovereign citizen movement. According to Tsidulko (2013), the “primary founder” of Posse Comitatus, was a “hate-spewing Christian Identity preacher named William Potter Gale,” (p. 13). Gale established the group based on “a religious component incorporated from the racist Christian Identity movement, a military culture adopted from the right-wing militias of the day, and on the financial side, the numerous tracts from prominent tax protesters,” (Tsidulko, 2013, p. 13). This movement did not gain momentum until the 1980s as a result of the farm crisis and economic recession. With the stress of the farm crisis and recession, Gale was able to use the combination of anti-government opinions as a catalyst to spread his theories to those affected. Although the Posse Comitatus weakened by the end of the 1980s, the ideologies that were established as a result spread and transformed into the creation of many different groups.
Yet another surge of the movement occurred during the 1990s with groups whom adopted the basic ideologies of the Posse Comitatus but also brought new anti-government beliefs. These groups began to also include more violence and extremism. For instance, Timothy McVey and specifically Terry Nichols, who identified as a sovereign citizen, carried out the Oklahoma City Bombing (Van Ness, 2011, p. 9). Another trend began during the mid to late 1990s that continues to plague the courts today. According to the Anti-Defamation League (2011), “the sovereign citizen movement received another burst of energy, forming scores of vigilante ‘common law courts’,” (p. 3). Furthermore, “paper terrorism” tactics also became a popular new technique to evade the government. With the combination of anti-government sentiment, violence and extremism, as well as a new tactic to get around governmental law, the various groups developed a system that continues to affect the general public today.

Throughout the 1990s, as the sovereign citizen movement began to spread, common conspiracy theories became the basis for the inspiration of the various groups. The most common or evident theory revolves around the belief that the U.S. government is operating as an illegitimate or “de facto” government. Although all of the groups may have varying details of their belief system, according to the Anti-Defamation League (2012), “the theories all share the belief that many years ago an insidious conspiracy infiltrated the U.S. government and subverted it, slowly replacing parts of the original, legitimate government (often referred to by sovereigns as the ‘de jure’ government) with an illegitimate, tyrannical government (the ‘de facto’ government),” (p. 3). Furthermore, during the “late 1990s, the movement incorporated another pseudo-legal strategy, called ‘redemption theory’, that claims the federal government has enslaved its citizens by using them as collateral against foreign debt,” (Sanchez, 2009, p. 2). As a result, sovereign citizens also believe that the 14th Amendment has created
A special class of citizenship, ‘citizens of the United States,’ members of which would have no rights-only whatever privileges the government designated to grant them. The government tricked Americans into becoming ‘citizens of the United States’ by offering them privileges, such as driver’s licenses and Social Security, which were actually hidden contracts with the government through which Americans unknowingly gave away their sovereignty. (Southern Poverty Law Center, 2009, p. 3)
With the distribution of Social Security numbers, the sovereign citizen groups believe that a hidden bank account was created from these secret contracts with the government. These accounts are often referred to as “strawman” accounts and “can be accessed using Internal Revenue Service (IRS), Universal Commercial Code (UCC), and fraudulent financial documents,” (Federal Bureau of Investigation, 2010, p. 1).
Furthermore, sovereign citizens believe that if they file fraudulent documents they will gain access to these accounts that contain “an amount ranging from $600,000 to $20 million, depending on the particular variant of the sovereign belief system,” (MacNab, 2010, p. 4). Sovereign citizens use all of these theories along with incorporating evasion of taxes, “paper terrorism”, spontaneous violence, scamming and conning to target their victims.
Even though these groups, once again, weakened at the end of the 1990s, resurgence occurred again following the attacks on September 11th and three other factors. According to Pitcavage (2014),

Three main things caused the resurgence in 2009; the election of Barack Obama, which energized anti-government extremists and furthered the conspiracy theories, the recession and mortgage foreclosure crisis and time, as it has been ten years since the last surge died away. (M. Pitcavage, personal communication, December 31, 2014)
Pitcavage (2014), concluded that a resurgence of the sovereign citizen movement has transpired approximately every ten years and lasted between three to five years; however, the most recent resurgence has not shown any signs of plateauing or slowing down.
According to the Anti-Defamation League (2011), “in 2012, the sovereign citizen movement is currently one of the most problematic domestic extremist movements in the United States,” (p. iii). Several factors have contributed to the now widespread and influential movement. With the invention of the Internet and social media, the sovereign citizen movement is accessible to all citizens and is disseminated at a faster and more efficient rate. The movement has now infiltrated a younger generation as well as other racial groups. For instance, according to the Southern Poverty Law Center (2014), “the movement is rooted in racism and anti-Semitism, though most sovereigns, many of whom are African American, are unaware of their beliefs’ origins,” (p. 1). Many of the groups that consider themselves sovereign citizens are now African American, Hispanic and Asian as well as other various races, but never knew of the true origins of the movement.
Yet another factor that has contributed to the spread of the movement lies within the prison system. According to the Federal Bureau of Investigation (FBI) Law Enforcement Bulletin (2011), “inmates provide a new population for them to sway to adopt the sovereign-citizen ideology; they then can train these inmates to help them defraud banks, credit institutions, and the U.S. government,” (p. 23). Although criminal groups such as drug dealers and gangs may not consider themselves sovereign citizens, by having contact with sovereigns while in the prison system, these groups have learned how to evade and defraud the government using the sovereign’s tactics.
Due to the invention of the Internet and social media, as well as spreading the sovereign citizen ideology through the prison system and other factors that encourage such behavior, the recent resurgence of the sovereign citizen movement has been on a steady incline. Although it is not clear how many actually claim to be sovereign citizens, the Southern Poverty Law Center (2014) concludes that “a reasonable estimate of hard-core sovereign believers in early 2011 would be 100,000, with another 200,000 just starting out by testing sovereign techniques for resisting everything from speeding tickets to drug charges, for an estimated total of 300,000,” (p. 4). Because there has not been a plateau in recent years, one can assume that the total has only risen since 2011. This increase will cause an escalation in the amount of instances of violence, scams and fraud.
Continue Reading: Sovereign Citizens Movement