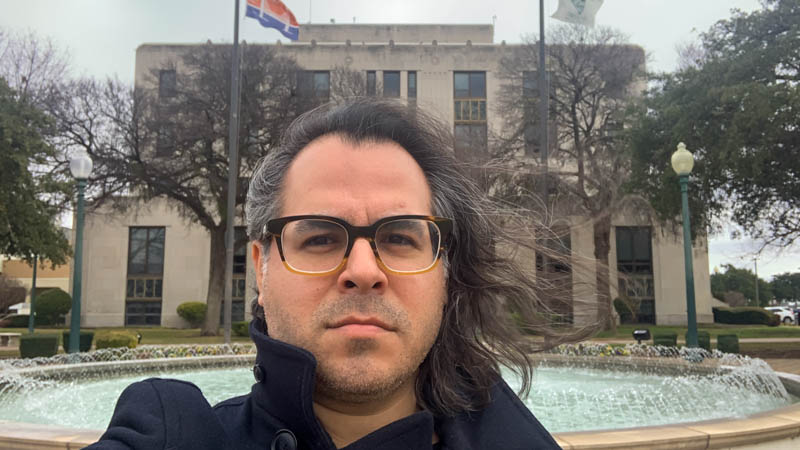 I started collecting Texas City Halls in August of 2020 as a way to get out of the house during the early days of COVID.

It was cathartic and became an exercise in documenting, celebrating, and lamenting the civic institutions of Texas. I learned about time and solidarity, and realized that there was a certain choreography to how City Halls interact in their city context as well as a larger context of morphologies.

The best day to go take portraits of City Halls is on Sundays because it’s quiet and there usually aren’t cars parked in the parking lots.

In the beginning, I liked unplanned, serendipitous discovery of City Halls, but the more I collected the more I became tactful in my approach. Googling routes the night before, checking street view to see which ones would make for a good TikTok video, making sure that the weather was agreeable and I was there at the right time to get good light.

When you capture 160 City Halls in a year you realize they all exist in a continuum. You can see time and the maturity of a city just by looking at the building. Each one a time capsule of an aesthetic and sentiment about where they thought they were destined to go. I feel bad for the City Halls who miscalculated their future.

Some of the City Halls were crude, but I learned to love their ugliness. Some were bold and aggressive and had the presence you’d expect of a building that represents governance.

I especially love the Classical/Brutalist, stone-facade City Halls with prominent entrances and a fortress vibe.

I also love the whimsical ones. Offering an alternative to my affection for austerity in traditional design. A beach house as a City Hall completely melted my concept of tradition.

Even the seemingly mundane ones are fascinating. Why weren’t they prioritized? What was it about the city that allowed them to atrophy and get tucked away in little corners or strip malls? I wonder about all of their identities.

There’s over 1,200 municipalities, towns, and villages in Texas. I have this vision of seeing them all and showing off their City Halls to the world.

I really wanted Texas to have a gigantic showing at #CityHallSelfie Day 2021.

I wanted to encourage my fellow Texans to represent, so I thought why not email them a description about the event with a picture of their City Hall, and an invitation to join me on the day – that conspiracy will have to wait for next year.

Documenting Texas City Halls has become a piece a me over the past year.

Now, I have opinions about elegant design, style, context and identity of City Halls. I have a sense of the potential of a city and where it is in its timeline, and what that means for its residents.

I have a ways to go, and the more I learn the more I want to discover. I see myself pursuing this practice, and I aspire to create a chronicle of Texas like Don Blevins work Texas Towns.

I didn’t realize it at the time, but taking portraits of City Halls is really taking a portrait of myself, and that perhaps, is the real conspiracy.