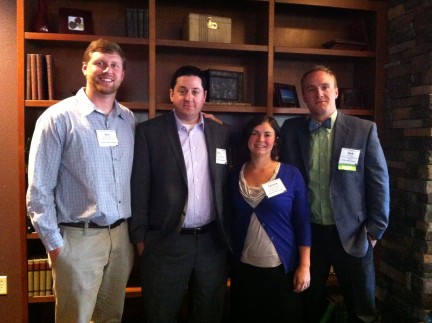 This summer I had the opportunity to represent ELGL down at the OCCMA Conference in Bend, OR.  Since our co-founders have kids to take care of, they sent me and my exceptional photography skills to let our members know what was happening at the Seventh Mountain Resort.  Now that I’ve had some time to reflect, I wanted to share my thoughts and takeaways from the conference.  The speakers at the conference were all great and brought different perspectives and ideas to share with those in attendance.  My two favorite however, were George Naughton, CFO, State of Oregon and Kevin Duggan, ICMA Western Regional Manager.

Mr. Naughton’s topic as listed in the program was “Emerging Financial Trends for 2015” but his presentation was more than just numbers and bar graphs.  He started off with just that, but then he moved into a fascinating discussion of “Oregon’s Demographic Trends”.  His overall message was that Oregon has changed immensely in the last 20-30 years and is going to keep changing in the near future.  First, by an expansion of population, Oregon is one of the fastest growing states in the US, and this expansion is occurring mostly in the Portland Metro region as well as the Bend and Eugene areas.  Oregon is also being transformed by a change in the demographics of age, the State is projecting a huge growth in the number of elderly citizens.  This impacts both the type of services that citizens require, but also the amount of tax revenue that goes to local governments.  Mr. Naughton went on to discuss the economic challenges facing Oregon, budget drivers, and future challenges.  These future challenges were interesting because he showed the impact PERS will have (even with this year’s reform), the burden on students for college tuition, and the challenges rural areas are facing.  Mr. Naughton’s presentation was really interesting and was a great “step back” to look at the larger trends that trickle down to affect local communities.

Mr. Duggan spoke on two different topics that I found particularly important.  His first presentation was on “How to Increase the Odds of Your and Your Organization Avoiding an Ethical Crisis” and after that he talked about “Developing and Maintaining an Effective Working relationship with City Council”.  His ethical crisis presentation seemed like it was intended to spark a dialogue about integrity and get the attendees thinking about ethics.  He had 15 separate points on avoiding ethical crises but I’ll give you the three I found most important:

His final thought on the subject was a quote attributed to Edmund Burke “All that is necessary for the triumph of evil is that good men and women do nothing.”

His second presentation on creating an effective working relationship with City Council was also important, because the more I learn about situations where City Managers or staff have issues its because of the relationship with council.  I think you could boil down his whole presentation on that subject to maintaining good communication with every member of the council.  Once again he had several suggestions for those in attendance and I think his top three were:

Both of Mr. Duggan’s presentations were informative and well put together.  I know they sparked me to think about ethics and not just council relationships, but the relationship between a supervisor and the other people that you work with or manage.

If I were to change anything about the conference I would like to see more on current issues and challenges that the state, counties, or cities are facing.  The part of the conference that I found the most interesting and fun was talking to the other professionals in attendance and just listening to what they are working on and the issues their community is dealing with.  First it was nice to get to know other conference attendees and make connections on a personal level.  However, I really enjoyed hearing from people about what they’re doing in their jobs.  Even the stories of struggles or tough experiences were good to hear.  After talking to so many people and seeing over and over again how enthusiastic everyone was to work in local government it really made me excited to work in the public sector and get started on my own career.  I think the conference could incorporate more of that into each day.  The roundtable discussion on Thursday was very interesting, but I wanted to hear more about issues that cities are facing or even what their current projects are.

I also think that OCCMA could incorporate their coaching initiative into the conference and ELGL could possibly do something similar with our conference.  My idea would be to essentially pair up younger professionals and students with a different veteran professional each day and there could be opportunities throughout the day for the pairs to connect and get to know one another.  Maybe in the morning there could be a get to know you activity after breakfast and in the afternoon the veteran professional has the opportunity to share some experiences and advice with the emerging leader.  I think incorporating some of that networking and mentoring time into the conference would be awesome and might encourage more young professionals to attend.

Also, shout out to the other Portland State MPA students that I went down to the conference with!  Mark Grabow, Dan Englund, and Caroline Zavitkovski.  We had an awesome time getting to know one another and learning more about the field of local government together.

The week after the OCCMA Conference the President of ICMA, Bonnie Svrcek, came to Portland to talk to ELGL.  When President Svrcek took office she had three goals for her term: member engagement, expanding the number of women in the profession, and engaging the next generation of local government professionals.  So of course an invite to Portland, where we just added the first ICMA Student Chapter in the northwest and where ELGL is striving to engage the next generation of local government professionals, was right up her alley.  The first night that President Svrcek was in town ELGL, OCCMA, and Portland State ICMA co-sponsored a happy hour event where she got to meet many of the area local government professionals.  Thanks to OCCMA and Alice Rouyer for finding and booking the awesome location.  Then the very next day President Svrcek spoke over the lunch hour to a room full of ELGL members about the defining moments in her career, lessons learned, and the major initiatives of her presidency.

Some of my big takeaways from her presentation was the advice that she gave.  First, I loved the quote “Say yes with pleasure and no with compassion” its an excellent way to live your life and to do your job in the public sector.  I also liked what she said about communication, don’t be bashful about asking for advice instead be courageous and don’t expect supervisors to read your mind, you have to communicate with them about your aspirations and needs.

Her initiative about student ICMA chapters is where ELGL members can help to see her vision completed.  These student chapters are an important piece of engaging the next generation of local government professionals and creating a pipeline of talented people into the profession.  Under her leadership the number of student ICMA chapters has expanded from 17 to 27 with several in the works, including one at the University of Oregon.  I think ELGL and its members can help by engaging with and encouraging student chapters.  Its great to expand the number of chapters but if they disappear in a couple of years the vision won’t be achieved.  We need to encourage the formation of a student ICMA chapter at the University of Oregon and then ELGL and OCCMA need to engage the two student chapters in the state (PSU and UO) by including them in conferences and events, and having members make themselves available to students.  This way membership in those student chapters will mean something and  they will continue to exist, keeping President Svrcek’s vision alive.

The month of July was very eventful for local government in Oregon and the OCCMA Conference and President Svrcek’s visit were great learning experiences for me.  I walked away from both events excited about the career path that I’m on and energized to get started, now if only this school thing would get out of my way…