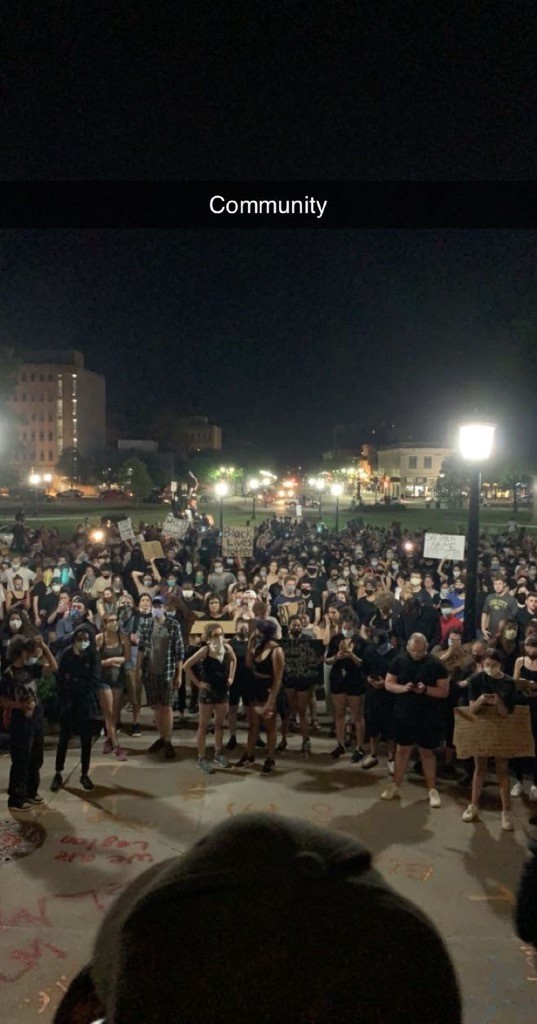 It was barely a month ago when the video of George Floyd dying by the hands of a Minneapolis police officer surfaced. Not long after, people all over the nation took their voices to the streets in protests. The group that I have actively spent the most time with, and seems to be the most prevalent in Iowa City, is the Iowa Freedom Riders. On the first nights of protests our group was pretty small, maybe 100 people or less. Our group consisted of mostly younger individuals, some high school or younger, and was in all honesty mostly white, but as the protests went on and gained traction and attention from the community the group became much larger. Nearing 1000 peaceful protestors, including the Mayor and city council, the protestors become noticeably more diverse in both age and ethnicity (resembling a positive unification in the community), and we became much more organized.

The Iowa Freedom Riders inevitably became more organized and out of that organization a concise letter of demand was drafted. This letter contains 18 points of dissatisfaction and it demands change from the city council, the local school board, and Iowa Governor Kim Reynolds. The Iowa Freedom Riders collaborated with other similar movements across Iowa when figuring out how best to get organized, what demands are important to us and to who do we send them.

Some of the most notable demands are;

– businesses and institutions must implement an equity tool kit (waiting for more on this subject),

– a clear and sensible plan for affordable housing (the demand goes on to call for accountability for those who are in charge of the local Affordable Housing Commission if change is not made),

– reforming the Iowa City Community Police Review Board so that it has real power, including but not limited to the ability to subpoena officers. The reformed board must also have the ability to enact and enforce measure able consequences when the board recommendations are not followed or implemented

– A more diverse school board that is representative of the members of the community, – the complete removal of SRO (School Resources Officers) from public schools

– And, a reduction of probation length for ex-convicts and no marijuana drug testing.

After the city council met and failed to immediately pass any substantive change, the protests began marching to council member’s homes and demanding change from there. It wasn’t long after that the Iowa City City Council released a list of actions and steps which it says it will take to address the systemic racism and police policies, here are all of those:

I personally could not speak on such issues – I’ve never been harassed or picked on because of the color of my skin, or the side of town which I live – however, this did not stop me from standing up and speaking to my community at each of these events. Between the three speeches that I gave, I asked my community members to contact their members of congress, their city council, and their governor to demand these changes. I spoke about the power of community and how important it is to get to know your neighbors and not to rely so heavily upon the police when dealing with small inconveniences or conflicts.

The most important thing I spoke about was getting involved in the community, how volunteering is important and brings the community together. It’s relevant and incredibly important to mention Geoff Fruin, the Iowa City City Manager committed to enacting change, as the superior to the police chief Mr. Fruin has the capabilities to enact the changes brought forward by this amazing community.

My name is Zachary Slocum, I’m a senior at the University of Iowa studying Political Science. I’m fascinated by policy and I intend on having a career in local government. If you have any comments or questions about “The Power of Community” you can reach me at my email [email protected], thanks!