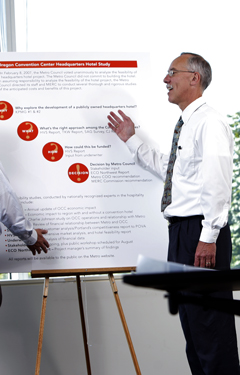 The Takeaway with Dan Cooper

It is difficult to write this feature without thinking about everyone’s favorite TGIF show “Hanging with Mr. Cooper.” However, we are confident Dan has heard enough “Hanging with Mr. Cooper” and D.B Cooper references to last a lifetime. We hope through our interview with Dan you will begin to understand the indelible mark he left at Metro and on the region. Dan is truly “old school” which you will find out by the CRAG references.

I am a big sports fan and often wondered why so many stars never quit until after they were washed up and looking pathetic.  I knew I wanted to go out at the top of my game. After I stepped down from being the acting COO and returned to being the Metro Attorney, I started to think about retiring.  I turned 65 in 2012 and now have 7 grandchildren . My wife and I are both healthy and enjoy each other’s company.  And I realized that a life time of living modestly and saving money meant that with my PERS retirement benefits I could afford to stop working.  I think I left before I screwed up anything too badly.

Describe the three accomplishments that you are most proud of in your career.

If we gave you one do-over, what would you use it for?

There is no way to answer this question.  Anything done differently in the past would mean things that came later could not or would not have happened.  And I have great happiness now with who I am and what I have done.  That’s not to say that I didn’t make mistakes that I regretted.  But maybe I learned enough from those mistakes to avoid making even bigger ones later.

Give us three of your favorite books.Here are two that I read in the recent past.

And here are the two that I took out of the library and have read since my retirement.

The Hidden Reality by Brian Greene:  This is one of my favorite genres.  A  university professor trying to explain current thoughts about why there may be at least a dozen or more different kinds of an infinite number of universes if you think of our common understanding of “our universe” that supposedly started with the “BIG Bang.”  And oh, by the way, that version of the universe is also of an infinite size, even if it may exist inside of other versions of a universe. Go figure. The math and science is pretty dense but actually lighter reading than federal regulations.

What would we find on your iPod’s “Recently Played” list?

Is this is a trick question for a 65 year old?  It’s simple.  I don’t have an iPod and I really can’t figure out how to download music onto my I Phone without paying Apple the royalty they want even when I am trying to copy a CD my brother-in law recorded (Fisherman’s Ball by local artist Steve Hettum).  So if you want to know what I like in music, ask me what CD’s I have in my car:  Grateful Dead, Bob Dylan, Kamakawiwi’ole (Iz), Billy Joel, Eric Clapton – you know, old folk’s music.

And speaking of iPod’s and ear buds, I greatly enjoy exercising with people who I can talk to while I run.  Or getting lost in my own thoughts and sorting out in my head what I am working on or dealing with.  I can’t do that while I have music or somebody speaking to me in with an ear bud stuck in my ear.  I wonder about all the folks who can’t seem to workout without their favorite playlist or recording.  Do they not want to be alone with themselves?

Most difficult experience at Metro.

It always seemed to be triggered by the election cycles.  Every eight years (1986/87, 1994/95, 2002/20003 and then again in 2010/2011, the elected head of Metro was being replaced by a new person.  These transitions were all rough in one way or another. In 1987 shortly before I was hired, the new Metro executive fired almost all the department heads and ended up in a battle with the Council over whether she could do that.  The legislature ended up passing a bill to resolve the issue.  I came aboard and helped deal with the fallout and since I held the only position that was responsible to both the executive and the Council, I needed to build trust with both. I did pretty well for a while on that task but as a major transition approached things broke down.

In 1994 the Metro Council filed a lawsuit against the Executive Officer challenging her authority to execute an amendment to Metro’s contract with Waste Management for dumping garbage at a new landfill in Gilliam County.

I lived through that but as my grandson would say “Big Mess!”

In 2003 the newly elected Council President filled the new position of COO with an acting COO while a search was made for a permanent hire.  The Acting COO following the wishes of the Council immediately terminated three directors.  They all were given no explanation other than go talk to Dan.  Two of them listened and accepted the severance packages I was authorized to present.  The third tried to play hard ball and held out for something I could not agree to.  A year later after  hiring a lawyer and giving notice he was about to sue we settled the case for less than the original offer and he had to pay his own attorney.

And then the COO left in February to take a job with the governor and I got to spend seven and a half months as the acting COO while the search for a new COO took place.

Ever thought of making a run for elected office?

Yes, but every time I tried that fantasy on I quickly realized I would hate campaigning and would also hate the job, which ever one it was. And besides I would need to resign as Metro Attorney and take a big pay cut.

ELGL is always looking for interesting speaker and topics to cover at our forums. Provide us with three recommendations.

So if you wanted to  hear an old lawyer tell war stories I might be persuaded . But if you want something of more interest to your members here are some Metro folks I would suggest.

Why do you think the Metro model – a major regional organization with an elected board – isn’t more prevalent across the country?

Nobody else has Oregon’s land use system.  So the pre-Metro entities in other regions lack the stunning authority granted to Metro’s predecessor CRAG in 1973.  It was this authority and the fear of how it could be abused that ultimately lead to the elected Metro model.

Talk to each other and actually listen.  Try to understand the different driving forces facing local governments and Metro and recognize that collaboration is the key to success. The key is that the region is too interconnected for any one jurisdiction to thrive all on its own if the rest of the region gets left behind.  But Metro and the region can’t succeed unless the region as a whole sees that success requires joint efforts that must be lead from the ground up and not the top down, repeat three times.