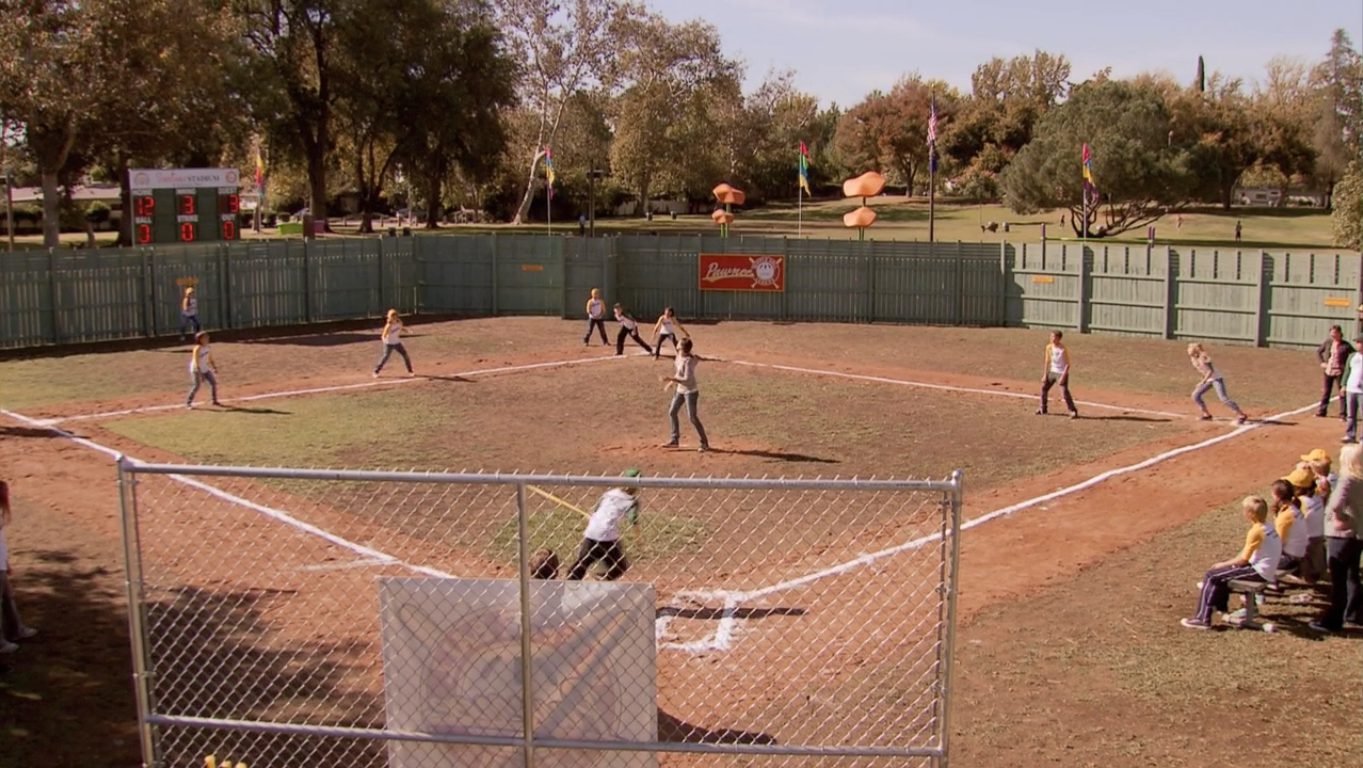 Today’s Buzz is by Clay Campbell.

What I’m Reading: Goodbye, Things: The New Japanese Minimalism [] – A bit extreme, but like the general idea

What I’m Listening to: The Lego Movie 2: The Second Part (Original Motion Picture Soundtrack) – really me listening because my kids have this thing on an endless loop – for a good local gov amp-up song, check out Track 7: Everything’s Not Awesome

When Life Gives You Lemons…

I’m pretty sure we all know how that one ends. For me, I made a local government connection with it a couple of weeks ago when my wife and I were watching (yet again!) a Parks and Recreation episode on Netflix. Season 3, Episode 12 is an episode simply titled “Eagleton.”

For any of you that aren’t already familiar with the show…um…get there. It’s some of the best therapy around for those of us in the local government sphere.

Back to Eagleton. So – I won’t replay the whole episode for you, but all you need to know to get you started is that the Town of Pawnee and the City of Eagleton are neighbors, but the people in each community really can’t seem to stand one another. 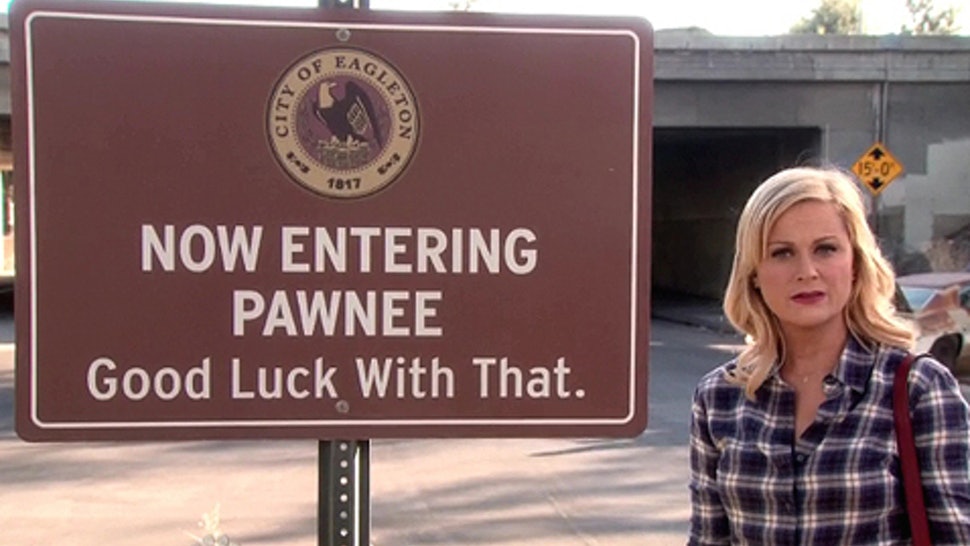 Here’s the City of Eagleton sign as you leave Eagleton proper and head into Pawnee. For more on the rivalry, go here and here.

Eagleton is none too shy about its socioeconomic affluence (whereas Pawnee is always much more realistically in some form of a budget crisis) and throughout this episode the point gets driven home that Eagleton doesn’t really care about cutting waste in local government, they practically flaunt it. Don’t worry though…Eagleton gets its just desserts in a later season. Normally Pawnee and Eagleton stay in their own lanes, but once in a while there’s a need for the employees of each local government to breathe the same air and Leslie Knope is none too happy about it.

So, we come to the issue of (surprise, surprise)…a park! Now half of this park happens to be located in Pawnee and the other half in Eagleton. Overnight, Eagleton decides to build a fence on the border and post a security guard to prevent any Pawneeans from enjoying the really nice Eagletonian side of the park. 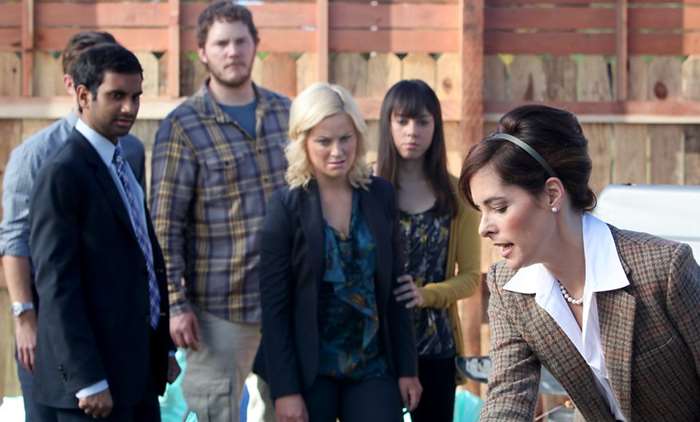 Through Leslie Knope’s numerous efforts to negotiate with Eagleton to remove the freshly installed fence, we get introduced to Eagleton’s Lindsay Carlisle Shay (played flawlessly by Parker Posey) who wants to forget her Pawnee roots because the grass on her Eagleton side of the new fence definitely seems greener. The efforts to bring the fence down fail miserably until Leslie receives a spark of inspiration hearing good ole Ann Perkins threaten to hit Lindsay Carlisle Shay with a baseball bat.

Overnight – Leslie Knope and the Pawnee Parks and Rec Department are able to transform the eyesore of an impromptu garbage heap on their side of the fence into a baseball field for the kids of not just Pawnee, but Eagleton too. Lindsay Carlisle Shay even seems to have come around. The ballfield represents a viable community contribution that redefines the space and leverages what was once viewed as a divisive barrier to now something that could bring both of the communities a little bit closer. In Pawnee/Eagleton standards, that’s progress. 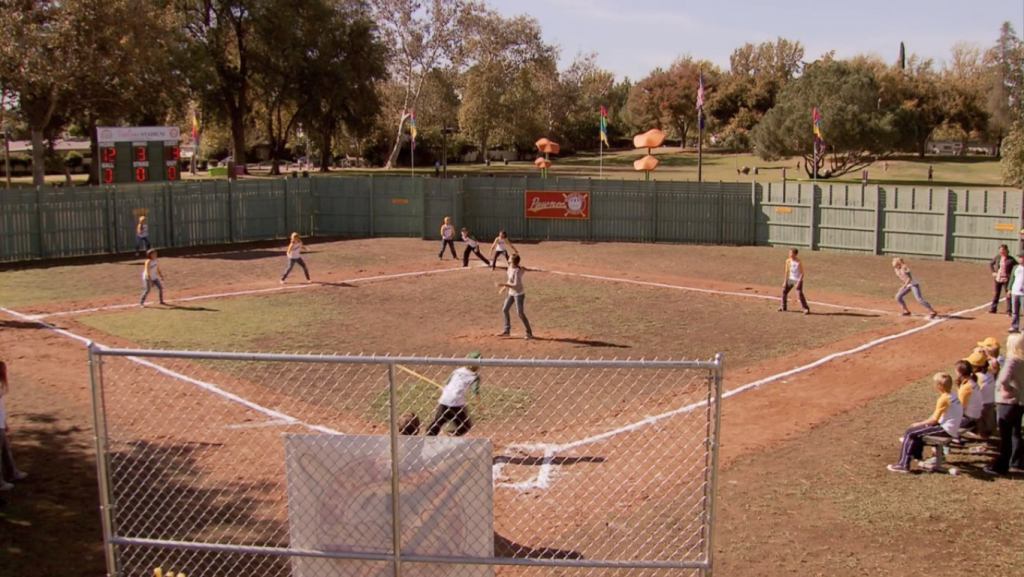 So what’s the point?

I started thinking about local government innovation (did I really stop?). When we assess our own organizations and seek out opportunities to reinvent what government looks like in our communities, we tend to jump to the conclusion that barriers are all bad and innovation is restrained if they aren’t removed. We focus much of our energy on removing barriers and not considering whether any of those barriers could somehow be transformed into something far more valuable and beautiful than just a removed barrier. Pawnee took something unwanted from Eagleton and elevated it to a place of function and beauty in their own community – and beyond. The episode wraps up with the ballfield serving as an olive branch from Leslie Knope to Lindsay Carlisle Shay with the following exchange:

LK: Hi, Lindsay. Introducing the Pawnee wiffle ball league. It’s an idea that I came up with after my best friend Ann over there said she wanted to bash your head in with a baseball bat. And I want to thank you for the fence. There’s no way we could afford that high-quality wood.

LCS: What if someone hits a home run? How will you get the ball back?

LK: One of the many Eagleton kids who signed up will just pop over and grab it.

Transformation is so much more than just out with the old and in with the new.