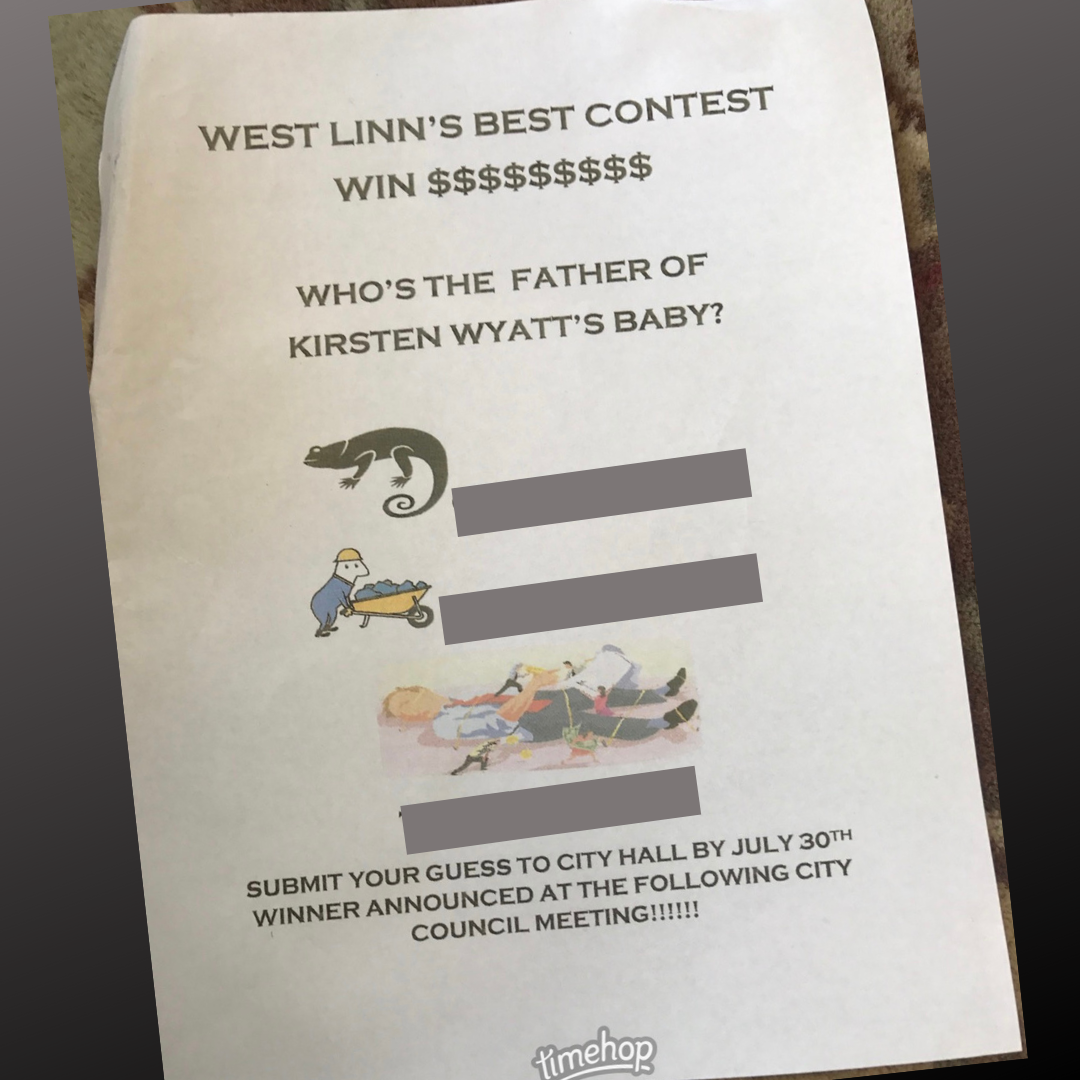 Today’s Morning Buzz is by Kirsten Wyatt, ELGL’s Executive Director and Co-Founder. Connect with Kirsten on LinkedIn and Twitter.

This gem of a memory popped up on my Timehop the other day, a reminder from when I was cleaning out my office and found this letter, and snapped a photo of it so I could remember it.

When I originally received it in 2010, I was serving as the assistant city manager in our community. This is a poster/mailer that was sent anonymously to my home when our oldest daughter was not yet one. I’ve crossed out the names of the three men in the community who were listed, but you get the gist: a community member thought an appropriate way to object to something happening in our city, was to create this poster (and find some snazzy clip art!), mail it to me, post in some coffee shops, and declare that an appropriate form of dissent. When I received this, I was devastated.

The timing of this “Who is the father of Kirsten Wyatt’s baby” (WITFOKWB) Timehop made me vividly remember what it felt like to be personally attacked, and so today’s Buzz is about the ways we adapt and cope when public service work grabs you by the throat and punches you in the face.

Often, we try so hard to not let emotion or personal issues fog our professional vision. When you’re under fire in a public facing job, it can seem that sharing what’s really going on with you is anathema. When I got the WITFOKWB letter, my first instinct was to tell no one. To not let anyone know that someone out there felt strongly enough about my work to go to such nasty levels. But then I realized that was silly – this was an attack on me, at my home, with the threat of a public scene in the future.

I told my city manager, city attorney, and police chief. They were incredibly helpful at first talking me down off of my hysteria ledge, but then following up to see if the letter could be traced, planning ahead for any spectacle at the council meeting, and generally supporting me during this bizarre time. (There was no “winner” announced at that council meeting, but we did have a uniformed officer there, just in case there was a scene.)

I received the WITFOKWB letter before we had founded ELGL and so my network was small. Of course I had Kent by my side when I received the letter and he instantly put me at ease, having seen the nastiness that can occur in small town local government when he was growing up with a city manager dad.

I think Kent’s exact quote was “we should find out who the father is so we can get some child support money…” His dumb jokes aside, the key concept is to find someone – a friend, partner, coworker – who you can trust to both cry your eyes out to, and also help you strategize what comes next.

Local government service can be all consuming. If you reach the end of your rope and the bastards are getting you down – step away. Take a long weekend. Use a sick day for your mental health. You don’t need to be extravagant but you do need to get some distance between the job and your life. You will be a better employee if you take time off to recharge and recuperate rather than try to power through.

I never found out who sent the WITFOKWB letter, but I definitely have some ideas. And whenever I saw the people I thought were behind it, I didn’t let on that they had ruffled me in the slightest. Which of course was not true at all, but I didn’t want them to feel as if they had won, or had any power over my ability to do my job confidently. I don’t see this as being in contrast to the first item ‘Tell Someone.” I think you can be vulnerable with people you trust, and then be a steely HBIC with those you do not.

Why Yes It CAN Get Worse

I’m not usually a fan of gallows humor (especially in local government when we’re trying to attract people to the profession, not scare them away) but in some cases it feels really, really good to hear other stories of asshat community members to remind yourself that you’re not alone and that it could, potentially, get worse.

I don’t think the first anecdote you tell in an interview should be the worst thing that ever happened to you in your career, but I do think when you have a support network, and someone is going through a hard time, it can be helpful to provide some company to their misery. It’s on more reminder that sometimes, it’s not personal – it’s just work in public service.

Feel free to share the link to this post with someone who is having a hard time and remind them that it can get worse, or that it happens to everyone, or whatever message of solidarity they need to keep working for the public good in public service.

Those are my five suggestions for what to do when local government work has you down in the dumps. What did I miss? What are some other perspectives you could share?