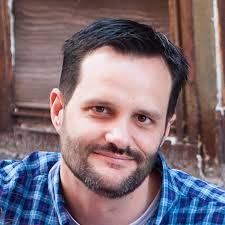 Sam Anselm (LinkedIn and Twitter) is the city manager of Joplin, MO. Prior to that, he served as the assistant city manager of Joplin from 2011-2014. Sam received his master’s in public administration from the University of Missouri – St. Louis in 2002, and his undergraduate degree in public administration from Northwest Missouri State University in 1998.

….Blessed. I have a loving, beautiful family who supports me in a job working with an incredible team of employees in one of the best cities in America, doing meaningful work serving our community.

….I really wanted to hear the webinar on dealing with social media trolls, and the other ELGL members are great to interact with.

…The Rise of Superman, by Steven Kotler, and Start with Why, by Simon Sinek. I’m currently reading Walkable City by Jeff Speck, The Revenant by Michael Punke, and The Three-Body Problem, by Liu Cixin. (I like books.)

If I had to buy a Fathead, I would buy….

….just about anything from the Star Wars collection. The X-Wing Fighter looks compelling.

….love barbecue, Star Wars, and woodworking is a hobby I’m devoting more time to. I could spend all day over at offermanwoodshop.com looking at their stuff. I built a dining room table for our new house that I’m kind of proud of, but one day I hope to be as good as Nick and his crew.

In pockets. Generally local governments are risk-averse when it comes to spending tax dollars on a project/initiative that could fail, and for good reason because we are stewards of public funds. But there is room for ample creativity within organizations when it comes to things like service delivery. We just signed on with the Center for Priority-Based Budgeting, and while the concept is simple (spend within your means, and on the important things first), Jon and Chris have developed an innovative package of tools to implement it. I love those guys. I see more cities doing more with citizen engagement efforts, too, which is encouraging.

Yes, on a sliding scale. For #localgov professionals just starting out, it could take some time to find the right fit, and with so many services offered by local government, I wouldn’t have any heartburn if someone bounced around from department to department, or even from city to city. But the higher up in the organization you go, the more important this issue becomes. Honestly, I’m not sure even two years is long enough for department heads or city managers/administrators. It can take a year or more just to sort things out before you can really begin to make an impact and truly serve the community.

I’m a HUGE fan, but best ever? I don’t know. Lost, The Office, and Seinfeld were all great too. That’s like asking me to pick which of our four kids is my favorite. (The answer is whichever one will take care of us when my wife and I are older. I’m just putting it out there, kids…)

Unfortunately, no, because our resources are finite, and even if they weren’t, things like giving bonuses are a no-no in Missouri, so we are limited in what we can do. But getting back to the question on innovation, I think there’s ample room for improvement in non-monetary reward programs that we can offer to employees in the public sector. When I figure out what that program is, I’ll let you know. Or if you have any ideas, please send them my way.

We finished a $5 million renovation to our historic baseball stadium in Joplin this year to support an independent league professional baseball team, so I guess we’re officially on record as saying yes. But stadiums that cost hundreds of millions to attract/keep the elite, top tier professional teams? I’d probably vote no at the ballot box. But every situation is different.

Unequivocally; a robust multi-modal transportation network is good for cities. Trees that grow money would be good too.