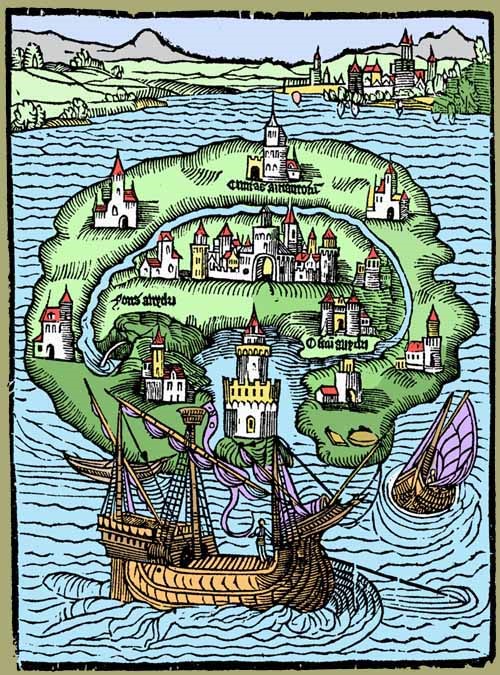 As part of his Wojo’s Wandering Wisdom series, Matt Wojnowski, City of Killeen, TX Assistant Director of Parks and Recreation asks whether are not you are discovering and highlighting your community’s utopia-ness.

Are You Building a Cathedral?


By: Matt Wojnowski – (Twitter)
One day in 1671, world famous architect Christopher Wren, who was commissioned to rebuild St Paul’s Cathedral after the great fire of 1666 which leveled London, observed three bricklayers on a scaffold, one crouched, one half-standing and one standing very tall, working very hard and fast. To the first bricklayer, Christopher Wren asked the question, “What are you doing?” to which the bricklayer replied, “I’m working.” The second bricklayer, responded, “I’m building a wall.” But the third brick layer, the most productive of the three, the future leader of the group, when asked the question, “What are you doing?” replied with a gleam in his eye, “I’m building a cathedral to The Almighty.”

I ask the same question to you with your work, “What are you doing?” What would your response be? Some would say, “I’m (insert job duties here)”. Others would say, “I’m part of the (insert division or department here) team”. Yet others, would say “I’m helping (insert your city name here) achieve its (insert vision/mission statement here)”. However, I ask, aren’t we helping our cities become utopias? Philosophical question, I know.
I have been fascinated with the utopian concept as long as I can remember. You can read about its influence on my local government career in my ICMA Article. I even have a collage of utopian maps framed in my office.


Now, let me cover some of the history, literature and utopian ventures. Sir Thomas More wrote Utopia in 1516. The original title in Latin is Libellus vere aureus, nec minus salutaris quam festivus, de optimo rei publicae statu deque nova insula Utopia which means “A truly golden little book, no less beneficial than entertaining, of a republic’s best state and of the new island Utopia”. And yes, the word utopia literally means “no place”. In his novel, Thomas describes his fictional Atlantic island and the customs of its residents. Thanks to Sir Thomas More, now we define utopia as “a community or society possessing highly desirable or near perfect qualities.”
Some of the most well-known American utopian ventures in the 1800’s were New Harmony (Indiana), Brook Farm (Massachusetts), The Icarians (several states), Fruitlands (Massachusetts), Oneida (New York), and Amana Colonies (Iowa). These were groups of people doing what they thought was best for them to achieve happiness, success, or greatness. It was a great benefit that in one way or another most of them believed in a common set of values or customs to help them work towards their utopia. Isn’t this same concept similar to what local government does?


Let me next highlight three other books about utopias.

I read The Giver as part a One City One Book or Community Read program. It was a great short read. The film adaptation of the book was released last year. I know there are whole slew of books about utopias but I wanted to highlight a few for you to possibly add to your “Books-to-read-at-sometime-in-the-future” list.

Back to a few more utopian ventures. In 1928 the Ford Company, opened Fordlandia in the Amazon Rainforest in Para, Brazil. Fordlandia was an industrial-type utopia to provide a source of rubber for his many automobiles. Henry Ford himself never visited the community. This was Ford Company attempt to have Brazilians works under United States values and customs – which did not work. Listen here for a podcast about Fordlandia. Next, I’ll turn to Levittown (Pennsylvania), (1950’s) which is widely-known as one of the first suburban Planned communities after World War II. Although not incorporated, residents were expected to comply with a lengthy list of rules and regulations regarding the upkeep of their homes and use of their property. I think planned communities may be the initial start of trying to achieve utopia if only through the initial planning stages and layout of the community.


Let me touch on two video games before ending with two more recent utopian community concepts. First, the early years our family did not own an Atari, however we did have the Intellivision video game system. They had lots of equally fun games that I remember with the most strategic game being one called Utopia (1981). Amazingly enough there are a few YouTube videos of the game – found here and here. The game cartridge says, “If you were ruler of your very own country, how good of a ruler would you be? Find out with a strategy game that captures the realism and problems of governing. Your goal is the happiness and well-being of your people. You make sure there is sufficient food for all. You take care of housing, schools, defense and the economy. Sound simple? That’s what they all say…” Couldn’t the same be said for a city/county manager?

In 1989, Will Wright and Maxis released the original Sim City. This was the first game where you could actually plan and build your own city. Sim City had all the basics of building a city – public works/infrastructure, transit, power, zoning, crime, budgeting, and even some disasters. I first played probably in 1992 once it became available on Nintendo. This was a planner or city manager’s dream game. I spent hours planning out the different ways to layout the city to maximize happiness and success for my city. Virtually, I was helping to build my Sim-Utopia. Thousands were now able to try out their ideas and methods through game to achieve success and tackle challenges similarly as city managers and mayors spend their careers doing. SimCity won several awards and future versions improved graphics, increased complexities, and added features to the game. Sim City sparked interest and influenced many towards their future careers in planning and local government management. The game even helped decide some political elections – read “The Real Mayors of Sim City” .


Let me end with two recent utopian ventures; the first being the community of Celebration (Florida). Yes, this is Disney’s attempt at utopia – a master planned community located near Disney World. Development began in 1996. On their website it states “The Celebration Community was formed with the concept of building a better place and a better way to live. In order to draft a blueprint for fulfilling such a vision and oversee its creation, the Walt Disney Company founded The Celebration Company. Utilizing the combined experience of a specialized group of world-renowned city and social planners, as well as the best architects of our time, The Celebration Company conceived five principles that would guide every aspect of the community’s creation. Those five guiding principles known as the Celebration Cornerstones consist of sense of community, sense of place, focus on technology, focus on education, and focus on health.”

The last idea I would like to cover I heard about on a couple of podcasts. It is Paul Romer’s concept of a charter city in Honduras- potentially at the current town of Amapala. Here is the link to the Planet Money (Episode 415) podcast and the This American Life (Episode 483) podcast and the Paul Romer TED Talk. Here’s what the Planet Money website says about the episode, “The big idea is that a poor country should take a small, empty part of its territory and say: We’re going to build a new city here. And in this new city, we’re going to get rid of our existing laws and rules, and bring in the best laws we can find from around the world. Get help from foreign countries. Maybe the UK could serve as a court of appeals. Maybe Canada could send in a few Mounties to help set up a police force.” This sounds like a utopian attempt to me.

Final: What Can Local Govies Learn from Utopian Ventures?

What can we learn from utopian ventures? We can study them (read a book or play a game), observe what worked, and observe what didn’t work. How did those working with the residents respond to their requests? Discover more about your own community. Discuss differences of opinions. Develop solutions to challenges. What can be improved? Share and swap ideas with other local govs. Modify them to meet your community’s needs. Work jointly with residents to find win-win resolutions. Make a plan and follow through. Highlight your “community’s highly desirable qualities” or utopia-ness.
What does this mean to you as a local government professional? Keep doing the best at what you do, which is (insert your job duties here). You are a part of the (insert your division or department here) team. You are helping (insert your city name here) achieve its (insert vision/mission statement here). You are “productive future leader with a gleam in your eye.” You are ultimately helping your city/county become a better place, striving toward its utopia. Loci, utopia praesi = Locgovtopia.