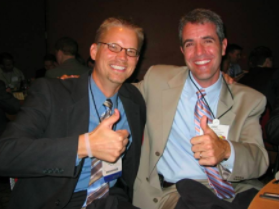 San Diego in 2004 with Eric Stuckey, a work colleague from Elgin, Illinois who’s gone on to now be the city manager in Franklin, TN.


Part of the University of Kansas MPA program involves the full-time students attending the ICMA annual conference. I was in Lawrence in 1990, which meant going to Fort Worth, Texas. Our class, near as I can remember, drove down.
We stayed far away from the conference site because hotels were cheaper. I recall that the dress was casual because it was in Texas and I now know, and appreciate, that’s how things are done here.
I don’t recall any of the other specifics other than we had a great time with classmates and getting to know more people dedicated to local government service.

So, 27 years later, we are in Texas again. I’ve gone from Lawrence to Elgin, IL to Novi, MI to now the final destination of Pearland, Texas.
Our home is outside Houston on the Gulf, so we travel to San Antonio on Saturday. Once again, I will be driving, this time accompanied by my wife, Jennifer, instead of carpooling classmates.
Also, will be just the two of us in the hotel instead of four classmates sharing a room to cut costs.
So, after a fair number of ICMA conferences, has to be more than 20, I’ve got some suggestions. There’s a certain rhythm to the dance of an ICMA conference with the opening ceremony, keynote, and then daily programs.
I think the rhythm lasts because it works for large and diverse audience. The routine specifics have definitely adapted over the years, thanks to our fellow members on the conference committee who design the program.
There’s a constant of ICMA which is Ross Hoff. Ross is a first-class ICMA staffer and now a friend. His first ICMA conference was back in 1982 in Louisville. If you see him in a hallway as he’s determinedly walking somewhere, tell him thanks.

There wasn’t an ELGL when I started, but it’s a great resource that I appreciate and now they’ve given me an opportunity to share some thoughts for you to take, enhance, or leave:

The circle continues. My Novi, Michigan City Attorney and friend, Tom Schultz has a son, Conor. He started the KU MPA program this summer and will be driving to San Antonio with his classmates. It will be fun to see him and everybody else that has been an influence and support for the travels thus far.