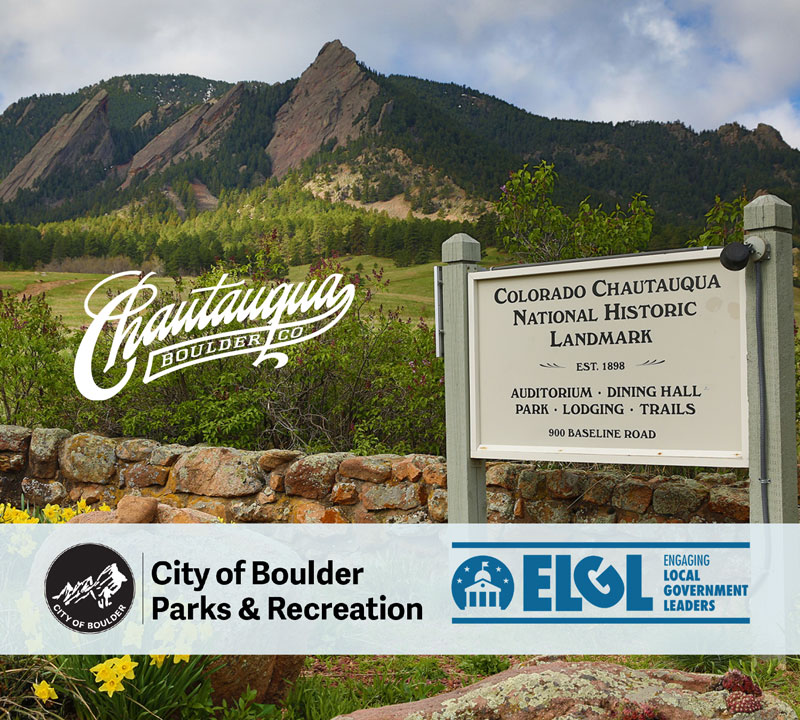 Check out this Press Release from the winner of ELGL’s Best Places in Local Gov Award (a.k.a. #ELGLKnope), Colorado Chautauqua Park.

We all know Boulder’s Chautauqua Park is a beautiful and amazing place. Now it’s also a national award-winning site! Every year the Engaging Local Government Leaders (ELGL) network celebrates the best places in local government. From a field of 32 nationwide locations and through five rounds (similar to March Madness), voters crowned Colorado Chautauqua with the ELGL Knope Award.

And, yes, the award is named after Leslie Knope, the character from the show Parks and Recreation.

Each year, this recognition program showcases and celebrates places that local government maintains and manages. This year’s focus was on “Historic and Cultural sites,” recognizing that governments are on the front lines of finding ways to honor history while also reflecting the reality of that history.

“Colorado Chautauqua is a place our community comes to listen to music in the auditorium, stay in a historic cottage, have fun in the park, enjoy beautiful views, and hike on amazing trails,” said Rhodes. “Winning the Knope Award is our opportunity to share Chautauqua on a national scale. The entire site is a testament to a long-standing partnership, with CCA and the city working together to provide a place where there is something for everyone.”

“We’ve always known that Chautauqua has a special place in the heart of Boulder, but winning this award makes it abundantly clear!” said CCA Chief Operating Officer Shelly Benford. “The support we felt from the community was phenomenal. Thank you to the city for being such outstanding partners, to the Parks & Recreation Department for nominating us, and for all the people who voted to show their appreciation for this incredible place.”

Thank you to the Boulder community who voted for Colorado Chautauqua throughout multiple rounds and for making us Knope Award winners.

About City of Boulder

Located approximately 30 miles northwest of Denver at an elevation of 5,430 feet, the City of Boulder is home to 106,400 residents and the state’s largest institution of higher learning, the University of Colorado. Boulder is a world-class destination with over 300 miles of public hiking and biking facilities. Its spectacular scenery includes more than 45,000 acres of open space. Boulder is a home-rule municipality that is self-governed under the Constitution of the State of Colorado. To learn more about the City of Boulder, visit our website or follow @cityofboulder on Instagram and Facebook.

About ELGL
Focused on all levels of local government (from analysts to mayors; librarians to planners; and everyone in between), ELGL’s mission is to engage the brightest minds in local government by providing timely and relevant content through podcasts, blogs, webinars, social media, learning cohorts and conference gatherings, with the objective of fostering authentic and meaningful connections that are grounded in practices of equity and inclusion.