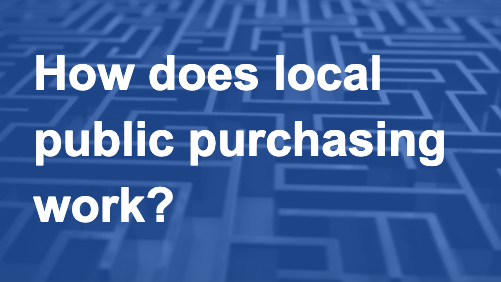 In this series, Brian Alexander of CoProcure helps break down the ins and outs of public purchasing.

Public purchasing is big business: governments spend 1 of every 3 taxpayer dollars buying something. With such large sums of money at stake, there’s obvious risk of abuse and corruption. Purchasing rules and regulations evolved with good intentions: to safeguard taxpayer dollars against corruption and help allocate government resources in ways that are ethical, fair and competitive, and accountable to the public.

So how does public purchasing work today? In general, most U.S. governments have a tiered system that imposes additional process steps as the value of the purchase increases. While the dollar amounts and specific approvals of these tiers can vary significantly from jurisdiction to jurisdiction, in local government purchasing generally falls into three categories, or “purchasing thresholds:”

For government purchases that are small in dollar value, often a few thousand dollars or less, there are usually no bidding requirements. Purchases are at the discretion of staff, who may complete a transaction without seeking additional levels of approval. These purchases may include something like a small print run of a report or a time-sensitive purchase needed before an upcoming event. However, the below-threshold level can vary widely across local governments. In some cases, the threshold is as low as a few thousand dollars; in others, like for New York City, purchases up to $150,000 can be made from Minority or Women-Owned Business Enterprises (MWBEs) without a competitive procedure.

Once the dollar value of a purchase rises beyond a few thousand dollars, government buyers must complete additional steps that inject some level of competition into the process. To fulfill these informal bidding requirements, a government employee often has to reach out to multiple businesses for price quotes on a proposed good or service. For example, for all commodity purchases between $10,000 and $175,000, the City of Santa Monica, CA requires a minimum of three price quotes from potential suppliers. In Sacramento, CA, the requirements are the same, but the dollar range is much narrower: only those purchases between $5,000 and $25,000 fall into the informal bid range.

There is also significant variation in the number of quotes required to move forward, the types of businesses that governments must contact, and the ways in which the quotes must be submitted. For instance, in Portland, Oregon, any purchases between $10,000 and $50,000 can be made after three oral quotes are received. In Austin, Texas, purchasers must provide evidence that they reached out to at least two (MWBEs).

In the informal bidding range, governments tend to have some level of discretion in selecting a supplier, both because purchasers have the ability to choose which suppliers are contacted about the opportunity and because there may be more latitude to justify utilizing a supplier other than the one with the lowest-price submission. Savvy businesses often target the informal bidding threshold to avoid the lengthy formal competitive bidding process. Many suppliers will aim to strategically price their product at the very top of this range. For suppliers and administrators alike, this informal bid range can also be fertile territory for initiating pilots or trying a new or innovative product.

Whatever the particulars of the jurisdiction, informal bid procedures are in place to ensure some level of diligence in purchasing without overly reducing the speed of the process.

Each of these stages may have specific requirements, depending on the jurisdiction, related both to how the process is conducted and which stakeholders must approve the contract. For instance, some regulations prescribe the length of time an opportunity must be advertised, the way in which proposals should be evaluated, and the documentation necessary to approve a purchase. Running a formal competitive bidding process typically takes 4–24 months, and is costly for both government buyers as well as suppliers. Strict policies give purchasers little discretion when making a purchase of considerable size, which contributes to the perception that procurement is a rigid and conservative process.

Rules may also dictate who can approve purchases of a certain magnitude. In some cases, a department director, Chief Procurement Officer, or City Manager can approve a purchase, while other purchases require city council or even mayoral approval. Approval structures add an additional layer of complication and can inject a greater degree of politics into purchasing.