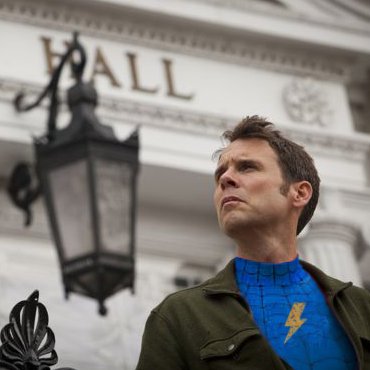 This post originally appeared on David Sewell McCann’s LinkedIn account and is reprinted with permission. David is an ELGL member and was the keynote speaker at #ELGL18 in Golden, Colorado.

Breakfast in the Colorado Room. I sit at a round white-clothed table with the City Manager, Assistant City Manager and two senior analysts from Brighton, CO as we nibble at eggs, bacon and fruit. We are talking about the city’s train depot project when suddenly, they all frown and look at their buzzing phones. One by one they each sigh with a density of emotion that is profound and impressive.

I’m shown a picture. “The historic grain mill is burning,” says the city manager. Then he turns to the team and says, “Time to go home.” Then they all stand and offer smiles that are at once melancholic and resilient.

We are all attending CCCMA, the Colorado City and County Managers Association conference. I am not a local government leader, but rather a storyteller invited to speak about how to find a town’s master story. The week had been a revelation for me on many levels — but this moment with the Brighton team has stuck with me — especially the quality of their sighs and parting smiles.

This was not the behavior of a manager or assistant or analyst. From where I sat, they were true custodians and ministers. These were sighs and smiles of personal responsibility.

When I taught elementary school, I went to sleep thinking about the children in my class. I woke thinking about them. It wasn’t a anticipatory kind of meditation — but a “holding”. They were always with me. It did not feel like a burden — though the weight was often heavy — it felt like a privilege. This is what I felt from the Brighton crew.

They were carrying their community, “holding” them — and this is why I question the title “manager”.  That is not what was happening when they snapped into action during the conference. There was management, to be sure, but what impressed me most was the care, the responsibility and the quality of leadership.

I learned how titles can be desperately inaccurate while working in the film industry. There is a role called the Assistant Director. At first blush, one might think this individual is, in fact, directly helping the Director with whatever she or he needs. But the truth is, the AD is far too busy to help the Director, because that person is essentially running the entire shoot.  That individual isn’t assisting anyone but is rather steering the ship.

Such is the case, I’ve come to understand, with the Assistant town or city or county manager. They are not waiting on the Manager — no — they are too busy with a truckload of details that need tending.

The idea of government job titles came to my attention by way of another conference attendee. She questioned the word “Manager” as inaccurate, and wished to replace it with “Leader”. I was compelled by her argument, and yet, still felt that it wasn’t only a group of “leaders” who sighed at the breakfast table, nor was it a team of “managers”. So what is the right word?

Earlier I said “Custodian” and “Minister” and I do love those titles. They touch my heart — which is the primary tool of navigation for storytellers. A custodian cares for the physical body while the minister cares for the spiritual. Both are at play when the historic grain mill is burning to the ground.

In this respect, I find myself landing with a poetic solution. I recognize that my proposal would never fly — would never land in the main street of most cities and counties — but I like my solution nonetheless:

Try on “Keepers of the Fire”.

I said it was poetic and it is — but try it on for just a moment. It is an old term that is still in use with the Iroquois people of central New York. It refers to one of the five tribes of the Iroquois, the Onondaga people. The “Keepers of the Fire” hold not only the meeting space for the entire tribe, but they hold the tribe’s stories. They tend to the stories like one would tend a fire.

Identify is made of stories. A city’s identity is comprised of its history, its residents, its secrets, its successes, and its buildings.

There are a LOT of stories in a city — and though the historians, the librarians, and the teachers will tell the stories, they are not, necessarily, the “Keepers” of those stories.

Stories need to be tended, they need to be adapted and adjusted and tooled so that the master story of a town keeps its integrity while growing with the constant changes that present themselves every day. The “keepers” are indeed the tenders of those stories. They “hold” the stories of the residents that have always been there as well as those that have just arrived. They “hold” the stories of the buildings that were there at the beginning as well as those currently in construction. And they “hold” the rules by which the community has abided, as well as change those that no longer serve the master story.

So I like “Keepers of the Fire.”  Though I am certain no municipality will follow me to this title, I will hold it in my heart — and use it in my soul when I meet a local government leader. I will know that they decide which roads need work, which rules need examination, which people need consideration and which projects need approval — but quietly, I also know that they are keeping the fire.

They are tending to the stories — managing them, leading them, caring for them and ministering to them —  and then ever integrating them into the living master story of their community.