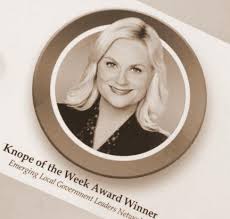 And the winner of the Knope of the Week is……

Bill Monahan was appointed to the Milwaukie City Manager position in 2010. Bill was City Manager for the City of Tigard from 1994 – 2005, and was also the city’s community development director for six years. Prior to that, he served the City of Brockton, Massachusetts, for eight years, as a city planner. Bill has a bachelor’s degree in sociology from Stonehill College, Massachusetts, a master’s degree in community planning from the University of Rhode Island, and a Juris Doctorate degree from Lewis and Clark College Northwestern School of Law, Portland Oregon.

Bill has succeeded in all areas of the public sector arena as a city manager in Milwaukie and Tigard, as a local government attorney for Jordan Ramis, and as an ICMA ambassador in China and Indonesia.

ELGL has benefited from Bill’s commitment to excellence in local government in several ways. First, Bill was an early supporter of our work and encouraged others to get involved with our mission of promoting the public sector including his daughter Zoe who graduated from the PSU MPA program and is currently working for the city of Jerome, ID. We’ve also benefited from now hearing Bill speak twice, once in a larger ELGL forum about city management and his transition to Milwaukie and then this week he hosted our first micro-networking event to discuss his recent trip to China. This trip provided especially beneficial to us as Bill recruited our first international member, Cindy Fu. We also must express our gratitude to Bill for serving as a mentor to many of us in local government. He is one of those rare individuals who backs up the talk about mentoring the next generation with his actions.

We feel it’s especially timely to acknowledge Bill since his beloved Demon Deacons were defeated by Louisiana-Monroe Warhawks in football last weekend. So we’ve enlisted a few of Bill’s peers to cheer him up by sharing their words of appreciation for Bill’s commitment to local government management.

Bill has an incredible story to tell about his travels, and he clearly knows the places to visit when traveling abroad.

Bill Monahan is a first-class professional public servant.  I first met him at the Amsterdam airport where we each made the connection to South Africa together.  We were part of an ICMA team providing a class on ethics and professionalism.  I have kept in mind one of his stories about handling a very difficult situation for him transitioning out of a community that he served.  His example for taking the high road is something I have kept in mind.   We have remained friends and in contact with for the last decade, I value his world-view and style; I learn from his music loves and his Red Sox passion.

Bill has raised the bar for local government management in Oregon. His professionalism and ability to “get things done” is noted throughout the region, and internationally, through his ICMA work in China and Indonesia. The connections he helped build between Tigard and Indonesia are still positively impacting the community today. If he could only pick the right team to root for in North Carolina, he would be batting 1,000.

Bill Monahan did a great job explaining the ICMA international programs, and I was honored to get a “sneak peek” at his presentation for the 2013 ICMA conference in Boston.  It was fascinating to learn about the ICMA China Center and the training opportunities that are offered; and also to learn more about how ICMA promotes training world-wide.  Bill is a great mentor for not only Oregon – but now, the world.  We’re lucky to have him as close as Milwaukie!