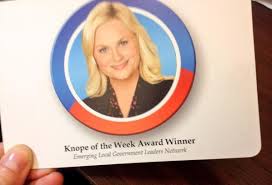 ELGL first met Clay Pearson during the 50 Nifty project. In the profile, Clay shared his top three career accomplishments, the state of local government in Michigan, and dreams of discovering morality.

Since our first encounter, we have learned that Clay is connected to everyone from Bill Monahan, Milwaukie (OR) city manager to Gabriel L. Engeland, Gilbert (AZ) assistant to the town manager to John McCarter, Novi (MI) management intern. We have Clay to thank for encouraging John’s participation in ELGL which has led to a quickly expanding Midwest chapter and weekly column, “Pure Midwest” by John that brings humor, news, and music to ELGL readers.

What does ELGL appreciate most about Clay? He is a “doer.” He creates opportunities for those entering local government, he promotes the profession by traveling abroad on ICMA trips, and he shares his network with others. ELGL has benefited from Clay’s recommendations for 50 Nifty profiles, new job announcements that he sends our way, and the sharing of ELGL news on his Twitter account.

Luckily for us, Clay is headed from one ELGL territory to another. ELGL Southwest is excited to welcome Clay and work with him in strengthening the new chapter.

Pearson brings with him more than 20 years of experience in municipal government. During his tenure at the City of Novi, he oversaw all City operations and worked closely with City Council to carry out their annual goals and policy directives. Some of the highlights include: initiating and developing international business relationships, leveraging partnerships with schools, road and surrounding agencies for joint facility use and garnering national attention when the City was named in the Top 100 Places to live by Money Magazine and Top Ten Places in the U.S. for families by Family Circle Magazine.

Clay holds a Bachelor of Arts degree in Economics from Gustavus Adolphus College in St. Peter, Minnesota and a Master of Public Administration degree from the University of Kansas.

The City of Pearland is a multicultural community located less than 10 miles south of Houston, Texas. The City is comprised of an estimated population of 133,400 and is the fastest growing city in Texas and the 15th fastest growing City in the nation. The award-winning Texas City is known for its highly skilled, productive workforce, outstanding schools, safe neighborhoods and a superb quality of life. Key industries include healthcare, life sciences and manufacturing.

We enlisted our Midwest correspondent John McCarter to find out what Clay’s peers think about him.

I have many takeaways from working for Clay during my 6.5 year tenure at the City of Novi. He empowered me to take ownership and not be afraid of pushing the envelope when accomplishing tasks. He instilled the trait of taking the extra steps in getting a project right the first time and in providing relevant detail to anything I worked on. Think ahead, anticipate potential good and bad outcomes in order to be better prepared.

I’ve had the privilege of working for Clay for the last year. He’s not only been a friend and mentor to me but has shaped Novi into the type of community that other communities model themselves after. He has taught me to be forward-thinking, engaged, and strategic when working on any project. Most of all I’ve learned to be passionate about the public service we as City Managers provide every day to our residents.

Clay was the first City Manager that I met at ICMA.  He allowed me to pepper him with questions when I was a student and has continued to mentor me throughout my career.  He has given me guidance, advice and assistance on several topics and has always taken the time to help make sure I am on the right path to succeed.  He helped me to expand my view of local government to include an international component and always encourages me to challenge myself.

I appreciate Clay’s enthusiasm for local government and the University of Kansas MPA program.  Rock chalk!

What has made Clay such an outstanding city manager at Novi are the intangibles: a broad intellectual curiosity about things beyond local government that nonetheless affect it; an eclectic set of influences and worldview; and a willingness to steep himself in every part of the job in order to do it better.  A rare combination of talent and constant effort.

Clay is a consummate professional, with an incredible focus on excellence.  His commitment to the city management profession and his passion for making a difference are notable. Clay is clearly one of the rising local government stars nationally.

Clay has earned his reputation as an innovative local government professional whose reach extended beyond Novi and who made Novi a name recognizable internationally.  His desire to learn and then his commitment to apply his learning to make Novi a stronger community marks his tenure.  And, hearing Clay talk about his time in Novi, one cannot help but appreciate the way the governing body, the staff, and the citizens of Novi nourished Clay and encouraged his development.

Clay personifies the Novi spirit: progressive, citizen focused, and constantly striving for improvement.  Clay never rests, he is always looking for ways to improve his community so it is poised to take advantage of all innovations and advantages that come into view.  In addition, he routinely stops to assist others, with no expectation of personal reward.  His tireless efforts on behalf of ICMA in international settings is truly impressive, witness his pro bono work where he shared his knowledge and expertise in South Africa in 2005 and last year in China.  Clay always contributes maximum effort!  It is a pleasure to call him a friend.

Clay Pearson is an exceptional forward-thinking public administrator which has been demonstrated time-and-time again by his commitment to exposing the entire Novi community to international government delegates from around the globe. He is a true talent that can address an auditorium of company presidents, chief operating officers, and high-ranking and accomplished professionals yet be a judge at a fifth grade science fair.

It’s a simple gesture, but in the storied three year history of  ELGL, Clay is one of two practitioners who have taken the time to write a handwritten note to express “thanks” for the work being produced by the all-volunteer ELGL. It’s such gestures that separate the good from the great. It’s clear that Clay falls into the latter category.

It has been an honor to work with Clay for over three years now. I was fortunate to serve on committees with him prior to joining the Novi team and I admired his work ethic and knowledge then. Coming to Novi my admiration grew as worked alongside him.  What many don’t see is that Clay touches so much of the product the City puts out there; reports, studies, memorandums, presentations all of which are a better product due to his influence.

He has the uncanny ability to consume information and respond accordingly in such a short period of time. Mayor Gatt often refers to Clay as the best City Manager in the country. He is definitely one of the best and is held in high regard in the Manager profession. His network of municipal leaders is vast, there is not a state in the union where Clay does not have a City Manager colleague that he can reach out to.   His appetite for knowledge and professional development is contagious and we have all benefited from this mentality. His mortal enemy is complacency and he always has a question.

Clay is a true leader with vision that equates to action and implementation. As City Manager, Clay is accessible to his team and values their input. His financial expertise has kept the City in a healthy condition in these tough economic times without a reduction in services to the citizens. Clay is consistently ahead of the curve in the use of technology and places emphasis on partnership with the business community.

Report on CLAIR Fellowship to Japan

The Value of Public Service

On Campus with the Kansas MPA Program