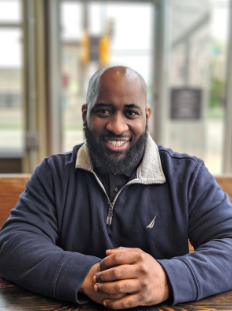 This guest blog is by Peter Kobak. Connect with Peter on Twitter and LinkedIn!

In many American cities, race is a primary indicator of a person’s success. What would it take for that to not be the case?

Dr. Farris Muhammad, the Chief Diversity and Inclusion Officer of the City of Peoria, Illinois, believes that setting goals and policies around diversity, equity, and inclusion in local government will play a central role.

Dr. Muhammad was hired in 2018 after a series of national articles highlighted the state of racial inequity in Peoria and local community conversations on race led residents to demand reform in city hall.

Read on for an interview with Dr. Muhammad that defines diversity, equity, and inclusion – and what those terms can mean for a local government that is invested in aspiring towards them.

Note: This interview has been edited for brevity and clarity.

Q: How do you define the terms of diversity, equity, and inclusion in your work?

A: I talk about diversity as “any difference that makes a difference.” As far as inclusion, it’s about how people are involved in an organization with consideration of power dynamics. Without considering inclusion, diversity among public school staff might show that racial minorities make up 20% of the workforce.

Similarly, if a fire department begins hiring more people identifying as women it may become more diverse – but if it still only has restrooms labeled for “Men” in the firehouse, how included will these new hires feel?

When it comes to equity, I usually explain it by contrasting it with equality. If I handed out size medium shirts to a group of people, that would be equal. But if I gave each person a shirt that was sized to fit them, I’d be taking an equity-focused approach.

Equity is focused on equal outcomes by providing opportunities tailored to someone’s situation.

Q: Should local governments have positions dedicated to diversity, equity, and inclusion, and if so, why?

A: Yes, I think it should be mandatory. Governments have been intentional about discrimination and over decades and we’ve seen that outcomes for minorities and marginalized groups have not drastically improved.

Because of that, we need to have positions in local government that are just as intentional about remediating institutional racism and other structural barriers.

Q: What does your day look like as a Chief Diversity and Inclusion Officer?

A:  In some other cities, my responsibilities are held by similar positions with different titles, like Equal Opportunity Officer, Chief Diversity Officer, or Human Rights Director. These offices can easily employ 6-7 people.

In Peoria, I am a department of 1 and because of this, my days can look pretty varied. I process intake of complaints and comments externally from community members as well as internally from city staff and conduct follow-up investigations.

I function as an Equal Opportunity Office, serve on the Fair Housing Commission, and on the Mayor’s Advisory Committee for Citizens with Disabilities. I also oversee contract compliance for minority hiring goals, provide diversity and implicit bias training for staff, and conduct research to ensure City Hall can be the leading example for implementing the values of diversity, equity, and inclusion in Peoria.

Q: How did you end up in the position of Chief Diversity and Inclusion Officer? What personal and professional experiences prepared you for this position?

A: Personally, a formative experience was growing up in America as a Black man. Professionally, I earned a PhD in Education, Administration and Policy.

I developed and researched theories to describe the world around me, including the power of narrative, the ecological theory of human development, and the concept of black resilience.

But in academia, I also felt the scholar-practitioner gap. At a top tier research university, I was encouraged to publish or perish: write articles for scholarly journals for fear of not staying relevant.

Meanwhile, I knew that many teachers- and even administrators- wouldn’t be able to access or have the time to read these articles and the impact wouldn’t be felt by the community or students in k-12.

I had a passion for interacting with people and being a change agent at the ground level and that encouraged me to transition into government.

Q: For city halls that are just starting to have conversations around diversity, equity, and inclusion, do you have any suggestions on where to start?

A: The first step is defining the problem and normalizing the conversation around these terms and what they represent. Developing the courage to have difficult dialogue centered on inequities and fairness. I subscribe to the philosophy that “you can’t grow in denial.”

A problem well-defined is a problem half solved. I try to encourage people that regardless of titles – Chief Diversity Officer or otherwise – nobody is really an expert in this work to where mistakes won’t occur and we cause some to become uncomfortable.

We have to be willing to make mistakes and display humility in apologizing when mistakes are made so that we can move forward.

Q: What’s the most interesting thing you’ve seen from another local government when it comes to implementing diversity, equity, and inclusion-related policies or programs?

It takes a lot of bravery for city or county administrators to advocate for these policies and it’s an important step. I’m seeing more momentum there.

Some places worth taking a look at and learning from are the City of Austin, the City of Seattle, County of Marin, City of Albuquerque, and the Minneapolis Parks and Recreation Board.

Q: Is there anything you’d want people to know that the City of Peoria is doing, through your position or otherwise?

A: The level of autonomy I’ve been given by the City of Peoria to pursue change, as well as the desire to create the position itself in response to community feedback, is worth noting.

What we’re doing in Peoria is addressing diversity, equity, and inclusion from an interdisciplinary approach, a collective impact model.

This approach empowers all to stakeholders to be instrumental in the change we desire, making Peoria being an equitable community of choice for all.

Dr. Farris Muhammad is the Chief Diversity and Inclusion Officer for the City of Peoria, Illinois. He can be reached at [email protected] or 309-494-8554.