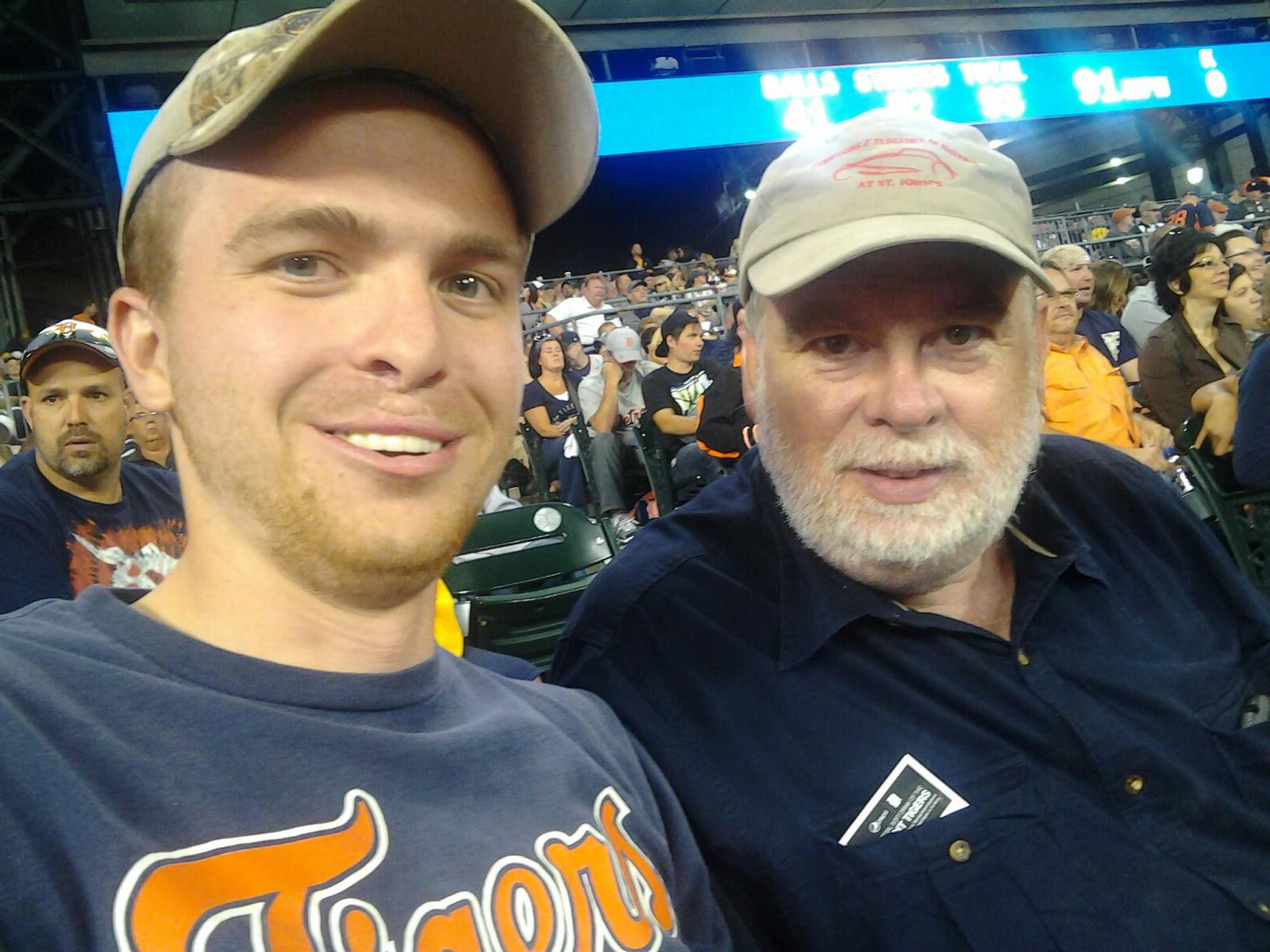 Sure, Detroit and its history is no stranger to scrutiny from the media, public and tourists. But Michigan ELGL wants you to look past the easy condemnation of this great city and proliferation of “ruin porn.” There is a vibrant, active, caring community working to rebuild and bring Detroit back to life. We believe, that as local government professionals, we should be championing those working to make cities better.
The mini-series features three columns: “The Ex-Pat” by John McCarter (Pearland, TX and formerly Novi, MI), “The Transplant” by Bridget Doyle (Sterling Heights, MI) and “The Lifer” by Amanda Thomas (Sterling Heights, MI). We welcome additional input from Michigan ELGL and others.
————————————-

We Give a Damn about Detroit: The Ex-Pat

You could say I’m part of the problem with Detroit. I spent the majority of my life living, working, and going to school in Southeast Michigan, only to leave at 24 for a job in Texas about a week after finishing my MPA. I’m a walking statistical stereotype. The quintessential Michigan ex-pat. There’s no avoiding it—so I’ll embrace it.

I left almost a year ago to the day but I still call metro-Detroit “home,” and my blood still boils whenever I hear someone take easy, cheap shots at Detroit,  particularly when those shots are accompanied by pictures of abandoned buildings and make no mention of the positive efforts being made by those who call metro Detroit home. The New York Times did it regularly when the bankruptcy was on front pages, but even they have moved on, along with the new Detroit—full of flaws but brimming with promise.  So you can imagine how disappointed I was to see such an overwhelmingly negative portrayal of the City in a post on ELGL last week.

Normally, I would never respond to a Detroit-bashing article. It’s commonplace to see similar pieces from various national media outlets, but when I saw it on ELGL I felt the need to object to the tone, intent, and the lack of up-to-date content in the piece. I’ve been a contributing member of ELGL for about a year and a half now. On top of my full time, job I try my best be a leader and a spokesperson for ELGL. The reason I and many others from Michigan invest precious spare time and energy in ELGL is because it’s an organization that works to solve problems. We usually find ourselves ahead of the curve; not behind it.
The original post featured pictures of abandoned properties in Detroit (a.k.a. ruin porn). Just for good measure, in this article I’ve included some pictures of great things happening in Detroit, a few of which were taken by me (like the above one of my dad and I enjoying a Tigers game) and a few were taken ELGL member Victor Cardenas and his wife Katheryn. A few came compliments of Google.
First off, I want to address the conclusion of the article, which revolves around the Detroit Institute of Arts (the DIA). It concludes: “As I wandered the glittering white palace that is the DIA, I wondered, what’s more important, this art or the blocks and blocks of emptied neighborhoods that most of this country has forgotten.” This sentence is referencing the fact that during the City’s bankruptcy process there was talk of selling the DIA’s artwork to cover some of the City’s debts, though that never actually happened.

It’s worth clarifying that the DIA is now funded partly through a millage passed by voters in Wayne, Oakland and Macomb Counties and partly through donations and grants. It’s managed by a Board of Directors, not the City of Detroit (although the City technically owns the DIA; yes, it’s complicated). The millage — approved by suburban voters in 2012, well before the bankruptcy — was meant to partially support the DIA, which before the economic downturn had been a pretty successful, mostly privately funded operation.  It’s always been a classically good example of a public/private partnership.  Metro-Detroit has done a lot of things wrong but the DIA is not one of them. Relations between Detroit and its suburbs are not always positive, but the DIA actually provides a model for effective regional cooperation.

But what really gets me is the fact that it gets the “what’s more important” question exactly wrong.  Selling the artwork would not have been an easy or certain way out of Detroit’s financial situation. Michigan’s Attorney General offered an opinion saying the City actually didn’t have the right to sell the art. The bankruptcy judge who oversaw the proceedings said he was never persuaded the city could or should sell the artwork. There are varying opinions on the matter and it was never actually dragged through the court system, but the thought that the City could have sold the artwork then turned around and used the funds to pay for pensions effectively is questionable, at best. While it potentially could have put a major dent in the City’s pension obligations, it certainly wouldn’t have refilled emptied neighborhoods in a City that could fit San Francisco, Boston and Manhattan within its borders, with room to spare.
The deal that prevented the artwork from being sold is what is worth exploring.  Basically, nine private Michigan-based foundations came up with about $330 million dollars, to be matched by the state’s $350 million dollars and $100 million of DIA’s own money, all of which will be used to guarantee the City’s post-bankruptcy pension obligations.  In return, the City will deed over the artwork to the DIA group.  It’s a deal that is interesting, that is positive, and that deserved to be the focal point of any analysis or opinions of the DIA.

The dichotomy of the DIA’s old world Masters, the surrounding up-and-coming Wayne State University, and the dynamic mix of its neighborhoods that draws residents and suburbanites is the real story and a strength in the community. Comparing the DIA to neighborhoods makes for a fantastic metaphor but doesn’t really equate to a long-term solution for the City and its residents.
The long-term solutions are the ones being implemented in the wake of the bankruptcy and the ones being led from the ground up by Detroit residents every day. Leasing Belle Isle to the State of Michigan was a big, difficult decision but one that seems to be working. Detroit is notorious for having entire blocks without functional streetlights; the Public Lighting Authority of Detroit was founded in 2012 to address the issue.  The organization, overseen by a board of five Detroit residents appointed by the Mayor and City Council, is exceeding expectations as they work to address the issue. The Michigan Science Center represents a nationally-recognized new chapter in the life of the now-defunct Detroit Science Center. Organizations are offering incentives to move into the City center (both financial and otherwise) and it is working.

It’s not all coming from the government. Some of the most meaningful work is being done by private and non-profit organizations and by residents themselves. Neighborhood organizations like the Osborne Neighborhood Alliance and the Neighborhood Service Organization work with residents to establish ownership of neighborhoods to battle crime and blight. Vacant land is being leveraged for community gardens. Detroit is home to a ton of great small business incubators, like the Build Institute and TechTown. As of March 2013, Detroit was ranked 5th in the country in terms of job growth in technology. The Detroit Medical Center continues to be a Godsend to kids like me who grew in metro-Detroit requiring the attention of talented specialists operating at the forefront of their fields. Campus Martius and the Detroit Riverfront are just two examples of amazing public spaces in the City; both of which have seen significant improvement and investment over the last several years. They are not alone. Try to find a restaurant without a reservation in downtown or mid-town on a Saturday night. Try to find a booth for breakfast in Eastern Market on a Saturday morning. You won’t.
Don’t know where to start? The Detroit Experience Factory and the Detroit Bus Company will literally show you the sights. And don’t forget to take a look at the City’s DDA website for the Catalyst Project, a $450 million dollar investment by the Illitch family, looking to build a new home for the Red Wings and other entertainment-based improvements.

The question of whether or not this country gives a damn about Detroit “dying” is irrelevant. Working in local government, we understand it doesn’t really matter what the rest of the country thinks. It matters what’s being done within our own communities. The residents, businesses, non-profits and government officials in Detroit and the surrounding areas have shown that they give a damn. I’ve worked with these people. I’ve seen their progress and their passion. I’ve gone downtown and enjoyed the fruits of their labor since I was six years old.
I heard a fantastic saying the other day at the Transforming Local Government Conference, “An egg broken from the outside; life ends. An egg broken from the inside; life begins.” The ultimate success of Detroit’s recovery won’t be a result of the rest of the country giving a damn because long-term change and growth will never come from the outside. Success will be a result of the hard work, dedication and investment of the people who call it home.  That work is happening right now.

I’m not even close to an expert, but the strides the city and the region have made over the last decade are evident to those who have lived and worked in the region; over the last two or three years even more so. Despite progress, the City continues to have issues. Often overlooked, City of Detroit retirees took very serious cuts to their pensions, which were promised to them by the City. You can drive around Detroit’s neighborhoods and take pictures of burned down houses for hours on end. The difference between those neighborhoods and downtown is stark, to say the least. There are serious racial and socio-economic divides regionally and within the City itself. Of course, the crime stats speak for themselves. But I will challenge you as local government officials and thought leaders in our profession to talk solutions instead of problems because in spite of the odds, people continue to invest their time, talent and energy into Detroit.
You can frame the bankruptcy as a symptom of “dying” or you can see it for what it really is; a chance at a (somewhat) new start. After all, the City started the bankruptcy process $18 billion in debt. There is no doubt that future residents will carry the burden and stigma of that bankruptcy for a long time but there is no denying it offered much needed relief to a dire situation. There is no telling what the future will hold but Detroit isn’t going anywhere; the community lives on. The tired old act of taking pictures of ruins and quoting 2008 statistics has been done 1,000 times before. It’s moving backwards and it’s unproductive. Let’s do what ELGL does best; let’s talk solutions and continue making progress. Let’s move forward, along with the City of Detroit. Otherwise, we’ll be left behind.