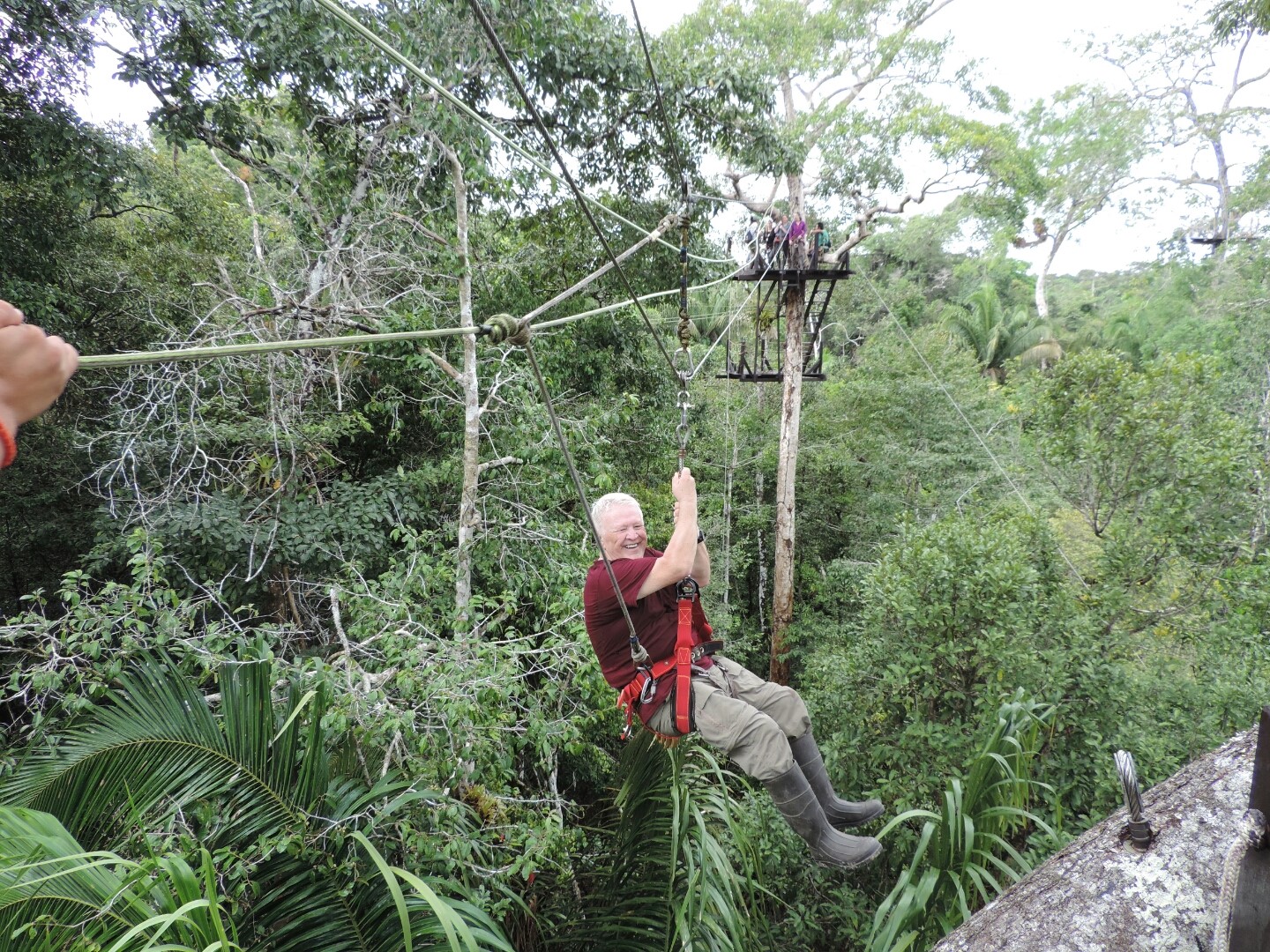 As most of you know by now, my sweet daddy passed away a little over a month ago after being the hospital for six weeks.  On November 20th I had the task of being the opening and closing speaker at his memorial service.  People who were there say I got through it extraordinarily well and that he would have been proud of me and my sister for how we handled everything in his last week on this earth.  It was a day I was not ready for at the age of 46 and Daddy only being 71.  He was too young to be gone and my babies are too young at the age of 11 and 7 to be without their Papa.  Now we are all in the days and weeks after a loved one dies and we are still struggling trying to figure out what life looks and feels like without him here.  Daddy asked to be cremated, a question I had to ask him at the hospital two days before we took him home to die.  I hated asking him that question and he hated having to answer me, but we both knew what was coming.

In the wee morning hours of what was to be my daddy’s last day with us, I sat by his hospital bed and starting writing down the words I would use at his memorial service.  They were lessons he had taught me throughout my life and they are lessons that I am trying to teach to my children.  Daddy’s lessons are worth sharing with you all, so here goes.

Lesson 1: NEVER tell a lie.  That’s the worst thing you can do.  Growing up, I was able to ease my punishment and got myself out of what would have been a year long grounding by telling the truth to Daddy.  He instilled a strong sense of right and wrong and always told me the worst thing I could do to him would be to lie to him.  He was my Jiminy Cricket.  That voice inside my head that I still hear, telling me that a lie isn’t worth the breath you waste on it.

Funny thing about this lesson is, I have found out since his death that my daddy had been lying to me and my sister this entire year.  He was an Army Vet with service in Vietnam and was exposed to Agent Orange during his service.  In March 2018 he has been told he had emphysema in both lungs.  In the months that followed he had also been told that he possibly had cancer in both lungs and his liver.  The VA described it in their records as a “mass that was in section 7, 8 and 5 of the liver and needs further testing for malignancy.”  The man who taught me that lying was bad, had told the biggest lie of his life all year by not telling us what was going on.  He knew that his lie was coming to an end on the Tuesday before he died when the pulmonologist asked him, “Mr. Bridges, has anyone ever told you that you have emphysema?”  I held his hand while he heard this news and he cringed.  I asked him if it was because he was thinking of my grandfather who was also a Vet and who had also died from this disease.  Daddy just shook his head.  I now know why.  The lie was catching up with him.

Lesson 2: Always be respectful, but know that respect has to be earned.  Every day of my life I worked to earn Daddy’s respect, because I knew if I had that, I had everything.

Lesson 3: Never go out in wrinkled clothes.  The man ironed his jeans and everything else short of his underwear and socks.  I have no doubt this was a product of growing up poor and not having much, but being proud of what you did have.  I drive my kids and my husband nuts making sure they look “acceptable” in public thanks to Daddy.

Lesson 4: Always try to help those you can.  Daddy had the most generous heart, to a fault.  His last year on earth was spent helping a couple of people who we all knew didn’t deserve it and who were using him every chance they got, but Daddy kept on giving, right up until he couldn’t.

Lesson 5: Love your family with every ounce of your heart and be fiercely proud of your kids.  Daddy wasn’t very free with the I love yous, but you knew when you got one that it was for real and you could hang on to it.  He taught me to share my I love yous with my kids very freely.  I was told by one of my uncles in the days before he died, that Daddy told him that my kids were the ones who made him feel like a Papa.  My sister has three sons, all in their 20s now and when they were little Daddy was still working and a lot of that time he was living and working in Mexico.  He was retired by the time my kids came along and I gave birth to his only granddaughter and Daddy was always partial to girls, being the oldest of eight brothers.  He was very much loved and I know he loved them.

Daddy and I got into a huge fight while he was in the hospital because I needed him to know just how much I loved him and had missed him this year because of the choices he had made to give his time and attention to others and not his family.  I loved him with every ounce of my heart, just like he taught me too.

Lesson 6: Be kind to one another.  For however proud, stern, or even an horse’s rear end Daddy could be, he was the sweetest man I’ve ever known.  On the last weekend I saw him while he could still talk and give hugs, I told him that I needed him to start eating again and get up and do his Physical Therapy so we could spend Thanksgiving together at his house.  After I left, one of his nurses was talking to him and told him he must be so proud to have such caring daughters who are always with him, taking care of him.  His response was, “That was the mean one who just left and this is the nice one,” pointing to my sister.  While there was a sting in Daddy’s words, I also knew there was love.  I am Ellis Jr. and there is no denying it.  We both have a hard shell and are nothing but mush on the inside.  I’m the one who always had to stand up to Daddy because no one else in the family would speak the hard truths that everyone wanted to say to him.  My Daddy played that role with his siblings and parents and so do I.  I always try to do it from a place of love and kindness and so did he, but we both failed miserably many times through the years.

In the weeks that have followed me writing down these lessons and the other words that I spoke at his service, I have come back to them many times hoping that I did what he wanted and made him proud in the end.  My daddy asked to go home and not die in the hospital struggling to breath.  His defiant daughter had taken his house key and had cleaned his house that he had not let anyone inside for years, because depression had gotten the better of him. My daddy who was squared away when he stepped outside, had let his house fall apart.  I had told him that I broke his rule and had cleaned his house so that he could come home from the hospital and that my babies and the rest of his family could come visit him, not knowing that would never be.  So on the day that my sister and I brought him home from the hospital and honored his request, my daddy’s body relaxed and without the need for an oxygen mask, Daddy talked to us for an hour before he took his last breath.  He told us that he was scared and we told him that it was OK.  We promised him we would take care of one another and that it was OK to leave.  It was his brother’s birthday that day.  His next youngest brother, who had died unexpectedly two years earlier and who Daddy missed tremendously.  Daddy’s last gift to us was telling us that our Uncle Mark was there to pick him up and that they were going for a car ride.  We told him if Mark was there, he better hop in and go.

I share all of this not to make you sad or to make you feel bad, but rather to ask you to think about those you might have lost and what lessons they taught you in the time you shared with them.  I miss Daddy every second of every day, but I am trying my best to remember his lessons and make sure that I teach them to my babies because they are what made him our Papa and they are what make me his mean daughter, the defiant one, the one who was and still is his mini me.