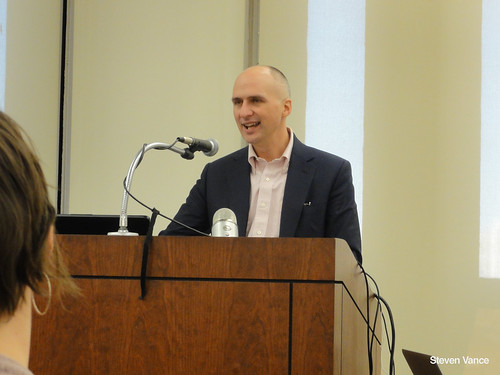 With a title such as “The Urbanophile,” how could we not want to hear more from Aaron Renn who is considered an opinion-leading urban sustainability strategist and writer. We became acquainted with Aaron’s work by becoming one of his12,639 Twitter followers, yet another reason to become active on Twitter. Our interview with Aaron ranges from his opinion on Portland’s light rail to his memories of rocking out to Bob Seger back in 1986.

Renn is also the founder and CEO of Telestrian, a data analysis platform that provides powerful data mining and visualization capabilities previously only available in very expensive, difficult to use tools at a fraction of the cost and with far superior ease of use.

No stranger to the Internet or urban issues, Renn is a long time innovator in the in field. He was co-author of an early social-networking platform at Indiana University in 1991, which attracted over 4,000 users in an era before the web. He created multiple open source software packages, including the only program ever developed for recovering data from corrupted gzip files, and a clean-room implementation of the Java standard class libraries. In 1998 he launched one of the nation’s first blogs, The Weekly Breakdown, to cover the Chicago Transit Authority.

A native of Laconia, Indiana, a town of 29 people along the Ohio River, Renn grew up fascinated by those larger places known as cities, and made it his life’s preoccupation to learn what makes them tick. He currently lives in Providence, Rhode Island.

You grew up in a town of 29 people and now probably have that many people visit your website in the span of a few minutes. Looking back on your career, tell us about the three career accomplishments you are most proud of.

I don’t think “proud of” is the right word. When I look at the biggest personal accomplishments I’ve had, most of them clearly weren’t a result of any great decisions on my part. I give God the credit since overwhelmingly any successes I’ve had come from three things – good genes, good upbringing, and good luck – none of which I had anything to do with.  Having said that, a few things stand out, not necessarily urban related:

I am taking a wild guess that when you were a 10-year boy you weren’t dreaming of becoming one of the leading urban affairs analyst. What was your dream job?

I’m not sure about when I was 10, but in the 1980s it was the era when greed was good. I wanted to ultimately work on Wall Street and be a bigtime corporate raider.

Who were your mentors that helped you launch such a successful career?

Clearly my long time boss at Accenture, Frank Modruson, was a huge influence and champion for me. Folks with nothing to gain for themselves have also done a lot to promote me, for which I’m immensely grateful.

Based on web traffic, what three stories have gained the most attention this year?

It’s hard to say in the last year, but overall my New Geography piece “The White City”  is by far the biggest piece piece I never did, followed by my piece on Detroit as the New American Frontier. My piece, Second Rate City, in City Journal from about a year ago on Chicago also was very widely read.

If you could only visit five websites for a year, which would you pick?

That’s a tough one since I have so many in my reader. You need at least one good domestic news site, so probably the New York Times. And an international site. I prefer the Financial Times or the Guardian. Sadly, these are all now pay sites.  I can’t limit the blogs I read to just two. It’s just too hard.

Grade local government’s use of social media. What are a couple of ways that it could be improved?

Most city governments seem to be doing the basics. I think the best use of social media is for government officials to humanize themselves by using their accounts for not just purely official business but to give you a glimpse – an appropriate one mind you – of what they are really like.

First concert that you ever attended.

Play librarian by recommending the best urban affairs books that you have read.

Clearly Jane Jacobs trilogy is up there. Lewis Mumford’s The City in History is also a must read. But to pick at least one non-obvious title, I really love William Cronon’s book “Nature’s Metropolis” on the joint growth of Chicago and its hinterland.

What are your impressions of the Pacific Northwest, specifically, Portland’s light rail and Oregon’s land use regulations?

They work for Portland and seem to be a fit with the values of the community. I think the problem comes about when people try to universalize them to very difference places with difference conditions and values.

Which city, in the East Coast or Midwest,  compares most favorably to Portland?