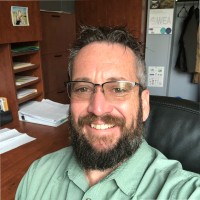 Chris deserves to be considered for this award for multiple reasons. Primarily, he works constantly to maintain and improve the relationship between the City of Pataskala Utility Department and the community that he serves. In the last year alone, he led three significant projects.

The City of Pataskala underwent a significant upgrade to its Water Reclamation Facility. This meant that the old lagoon system would be used over the summer. As one might imagine, this temporary shift resulted in a series of odor related complaints from citizens that reside close to the plant. Not only did Chris stay in contact with every member of the public that had concerns, he wrote regular website updates throughout the summer. He also took the initiative to implement a temporary solution to the problem. This is typical of Chris: using his technical expertise to solve a problem AND addressing citizens’ concerns at the same time.

Chris’s second project was a redesign of the Utility Department logo. While this may seem minor, it was his initiative to suggest a “water bottle giveaway” highlighting the new logo that was such a success. He designed the project so that it was funded through a public/private initiative meaning absolutely no money was spent from the water and sewer rates paid by the citizens. It is this kind of forethought that Chris shows on a regular basis. The water bottles were primarily distributed to the public for free, at the local summer street fair and it was an absolute success, once again demonstrating Chris’s ability to utilize his professional experience to positively influence our community.

Finally, the Ohio Environmental Protection Agency in conjunction with the Ohio Department of Health established a program to test various wastewater plants in an attempt to gather more accurate numbers in regard to the COVID-19 infection rates. Chris lobbied for Pataskala’s inclusion in this program realizing that it was another avenue to assist with tracing the spread of the disease in his community. Pataskala was included in the program and was the smallest community in the state thanks to his initiative.

Chris Sharrock, like Chris Traeger himself, has the best intentions of serving his community and supporting his staff and colleagues. When City Council identified a need for a utility rate increase, Chris spent countless hours comparing surrounding community rates all the while being cognizant of the strain that a rate increase could put on our citizens. Eventually he was able to provide council with a path for a series of three smaller increases phased in over 5 years. Additionally, there are many instances of how Chris mentors his staff. He confronts problems directly and fairly but constantly looks for ways to professionally develop the employees of the Utility Department.

Chris’s dedication to Pataskala has a long history; after serving in the U.S. Army, Chris started at the city in 2004 in the lowest position in the water department. His work ethic and experience eventually led to his promotion through the ranks to his current position of Director of Utilities. He has a Class 2 Wastewater Operator license and a Class 3 Water Supply Operator license from the Ohio Environmental Protection Agency. He is also a member of the American Water Works Association, the Water Environment Federation and the Ohio Water Environment Association. Under his leadership, the Pataskala Utility has been awarded the 2020 OWEA Safety Award and the 2017 Ohio Water Environment Association Outstanding Operator Award. Chris is quite literally a water warrior for his local government.