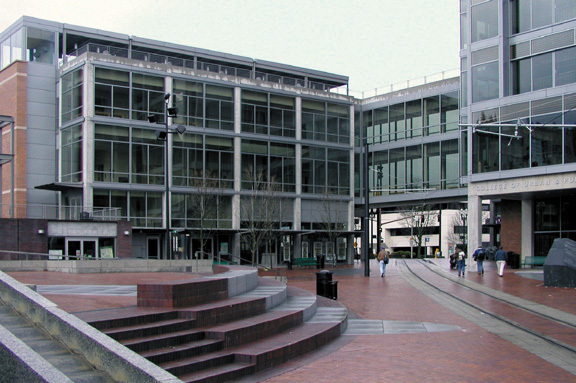 Kittelson’s Corner is back again this time the ELGL Program Manager is here to tell us about his most recently completed quarter of graduate school.  Ben is a second year MPA student at Portland State University, he is also an intern at the City of West Linn, where he works on communications and economic development issues for the City.

The Beginning of Year Two

To be honest with all of you faithful ELGL readers, I struggled when writing this post.  It wasn’t that my fall quarter wasn’t productive or full of accomplishments, but when I reflected on the last 4 months I found that I had more to say about my work outside of school than the work that I had been doing in the classroom.  I think that, especially in a professional program, there is a point in graduate school where the majority of the learning no longer takes place in the classroom and for me that was definitely the case as I started my second year of MPA at Portland State.

I took two classes this fall, the first a very practical Local Government Administration class taught by the immensely knowledgable Dr. Phillip Cooper.  I learned a lot in his class, he covered everything from forms of government to importance of the ICMA Code of Ethics.  The most interesting things for me are the big assignments in a class and for this one we had two assignments worth sharing with you all.  First we analyzed a court case about government speech and whether communities had to give access to their communications tools, Case Study – Sutliffe v Epping.

We also did a community analysis on a City, we pretended we were looking for employment at a nearby City and we had to decide based on research and visiting the community whether we would be a good fit.  I chose Wilsonville, OR: Wilsonville Community Analysis Paper. The assignment forced me to go to my first City Council meeting and it was a great experience (usually class got in the way of monday night West Linn Council meetings, but for the assignment we could skip).  I remember texting a classmate afterwards that the level of detail covered at the meeting was both fascinating and frightening.

The other class I took this fall was Public Finance with Dr. Jay Kenton, who besides moonlighting as a PSU professor also serves as the Oregon University System Vice Chancellor of Finance and Administration.  This class was full of his lessons learned from experiences in the field and working in finance for decades.  Before this class I had never heard of a CAFR and, knowing this I’m sure, Dr. Kenton made us analyze one.  My partner and I looked at the City of Sandy: CAFR Report City of Sandy.  This experience exposed me to the important aspects of public finance and knowing what and how to look at a CAFR will come in handy down the road.

Even though the classes I took were good, reflecting on the fall only got me thinking about the things that I did and learned outside of the classroom.  I started my internship at the City of West Linn this past fall and the work that we do at ELGL really took off as we put on our first annual Conference, #ELGL13.

First day at my internship with the City of West Linn #LocalGovernment #ELGL http://t.co/nxDBexwSAA

My experience at West Linn, as I’ve documented in a past Kittelson’s Corner, has been a great learning experience.  I was given a level responsibility and freedom that I didn’t think interns were allowed to have.  I have really learned hands on what its like to work in a local government, the impact of citizens, how a City Council sets policy, and how a City Manager effectively manages, shapes, and steers an organization in the direction that is best for the community.

I think more important than many of the things I’ve done for West Linn, and definitely more important than school assignments, is what I’ve observed in how the City Administration deals with citizens.  The democratic process and citizen involvement are the hallmarks of local government and are what separate the public sector from the private.  Seeing how the City leaders deal with issues like a recall campaign, blistering public testimony, and a Planning Commission that has a different vision than the Council has been a learning experience that I could have never understood from a book or lecture.

The work I have done for ELGL has also been such a great learning experience and has cemented for me that the public sector is my dream profession because it is full of passionate and knowledgeable people that truly care about their communities and making them better places to live and work.  When reflecting on the fall its hard not to think about the first annual ELGL Conference that took place on October 4, 2013.  I even got to speak:

@benkittelson56 giving his lightning round “Me & ELGL” speech #ELGL13 pic.twitter.com/Xh9ppTTZKV

The event was such a success that we already have the #ELGL14 Conference date set for October 17, 2014.  The process of putting that event together and then having it all work out so well was awesome. Each speaker brought their own strength and passion, each attendee came ready to learn, it was great.  The experience helping with #ELGL13 has lead to me spearheading the scheduling for the 2014 ELGL speaker series, from lunch forum and webinars to contacting our dream speakers for the #ELGL14 Conference.

Reflecting on what I learned this fall led me to more than the classroom and I think that’s okay and is even expected at this point in my education.  I’ve got some great classes lined up for the winter quarter, Public Works Administration, Ethics in the Public Sector, and Public Sector Budgeting; but I’m willing to bet the biggest lessons I learn won’t be from any of them. To leave you with a last lesson from the fall and another #ELGL13 plug here’s my favorite quote from Governor Ted Kulongoski:

“If you’re trying to be right every time, you’re in a fruitless chase. Nobody is that good.” – #GovKulongoski #ELGL13