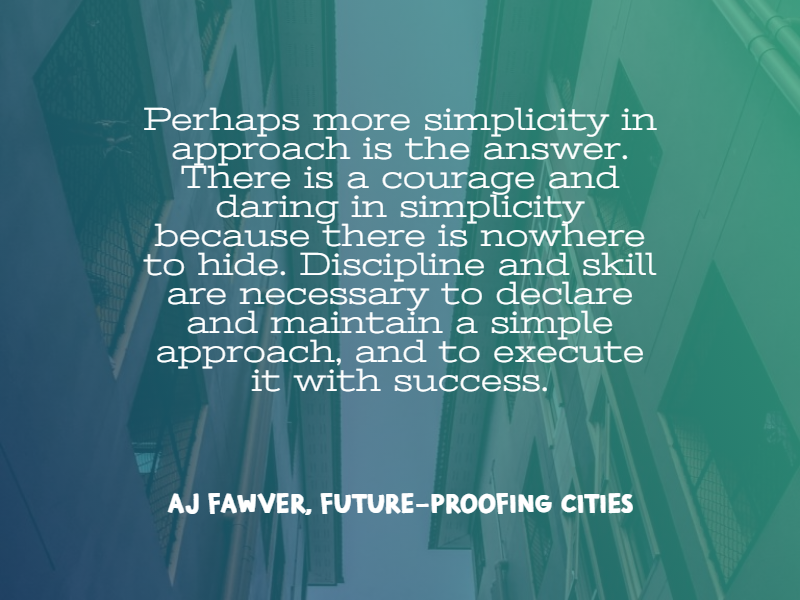 There is a never-ending supply of theories on how government should operate and function. Philosophies and theories are constantly evolving. Meanwhile, cities continue to struggle with cohesion, consensus, and execution. A lack of continuity and consistent practices are a frequent complaint of residents, and the pet projects of the few replace the needs and desires of the many. So, what’s the alternative?

Perhaps more simplicity in approach is the answer. There is courage and daring in simplicity because there is nowhere to hide. Discipline and skill are necessary to declare and maintain a simple approach, and to execute it with success. Fortunately, it is also more useful for officials and residents alike, and new faces are brought up to speed quickly.

This was the topic of a recent dinner discussion with friends (virtual dinner party, of course!). The bottom line the group reached was that things are often too complicated and city government tends to lack a true (and well-articulated) focus. Reflecting on this, it reminded me of time I spent working within a police department and learned about CompStat (or fully named, Compare Statistics), a performance management system focused on crime reduction created by Jack Maple in the mid-1990s that is now used by more than a third of large city police departments. It is a simple, four-step approach. What, I wondered, could that look like if city governments incorporated this thought process? Let’s break it down, step by step.

1. Know what is happening. This has two requirements, for cities to truly succeed. First, leadership must know what is happening inside the organization. It is extremely common for organizations to have multiple disconnects between the front-line staff, mid-level management, and the city manager’s office/elected officials. So many issues are created as decision-makers lose touch with the folks interacting with residents and businesses daily. Without a commitment to remedy this problem, more of the same is all that can be expected. Second, policymakers must know what is happening in the community. Not periodically, not when it’s convenient, but consistently.

2.  Have a plan.  Many cities say they have a plan. When asked what that plan is, what do you hear? Some reference any one of the dozens of plans they have paid consultants to put together for them. Ask any two department heads what the plan is for their community and where they fit in. Typically, whichever adopted plan directly relates to their area of oversight is the plan they’ll tell you is most critical. Elected officials hold a strategic plan up as the city’s primary plan of action. Finance directors, the adopted budget. Parks directors, the parks master plan.

3. Do it quickly. Time is critical in communities. If you don’t feel that’s true, look at the recent scramble for cities to react and adapt to COVID-19. Ask residents how long they expect answers to take or services to be provided. Ask elected officials how many terms they expect to be in office to accomplish meaningful progress.

4. If it works, do more; if not, do something else. So often, city governments are doing things which are not working, but they are so entrenched in the organizational structure or the budget that is not fully discussed each year that they just keep doing the same things. The determination of whether something works is simply decided based on how many angry phone calls council members receive, and measures of success (and not just activity, as recently discussed in my last post) are non-existent.

While the CompStat approach was not created to be used in this way, its simple structure lends itself to a streamlined way of getting back to the things that are important. At the very least, use it as inspiration. Now is a great time to reorient and recalibrate as we find ourselves in adaptation mode.