This is the new monthly blog series by AJ Fawver, Community Consulting Program leader for VERDUNITY and based out of Lubbock, Texas. She shares her take on planning for communities and securing their future in a time where legislation, fiscal pressures, disengaged citizens, and diminishing resources make it increasingly challenging. 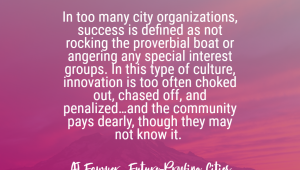 Culture Shifts Require Being, Not Doing 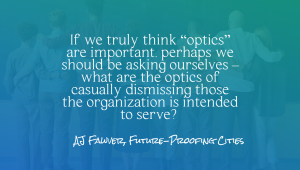 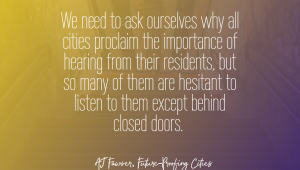 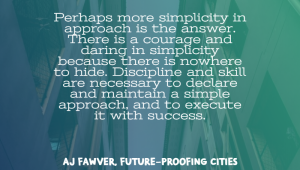 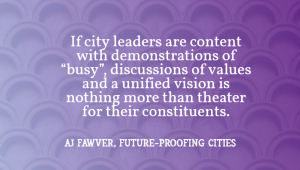 Being Busy is Not Equivalent to Being Successful 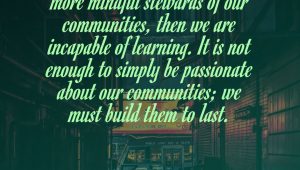 Skillful Stewardship in Times of Crisis

AJ Fawver currently serves as the Community Consulting Planning Leader for VERDUNITY, and has been in that position since mid-May of 2019. Prior to this role she gained fifteen years of municipal experience as the Planning Director for the City of Lubbock, Texas, and the City of Amarillo, and as the Development Services Director, Planning & Development Administrator, & Planning Manager for the City of San Angelo.  Her work there included urban, regional, transportation, and neighborhood planning, in addition to grant and ordinance writing, historic preservation, public engagement, and group facilitation. Her passion for this work dates back to her upbringing in rural communities and watching them weather the cycle of growth and decline - fueling a curiosity about building cities that are lasting and resilient. She holds certifications obtained through the American Institute of Certified Planners (AICP), the Congress of New Urbanism (CNU-A), and is a Certified Public Manager (CPM) through Texas Tech University. Her bachelor’s degree in Government was received from Angelo State University, and her graduate work in Public Administration was pursued at the University of Texas at Arlington.  She is in her second term as the Director of the Northwest Texas Section of the American Planning Association (APA), is the chair of the APATX Diversity & Inclusion Committee, and has served in a number of positions at the regional, state, and national levels of the APA. AJ was named in 2016, 2017, & 2018 to ELGL's Traeger List, a ranking of the top 100 local government influencers, and was the recipient of the APA Texas President’s Award in 2017.  She has appeared on a number of podcasts, spoken at conferences, and written about the planning field. Her passion for creating attainable, low-cost training for cities of all sizes - and helping them to break away from the status quo in city planning - prompted her transition to the private sector.