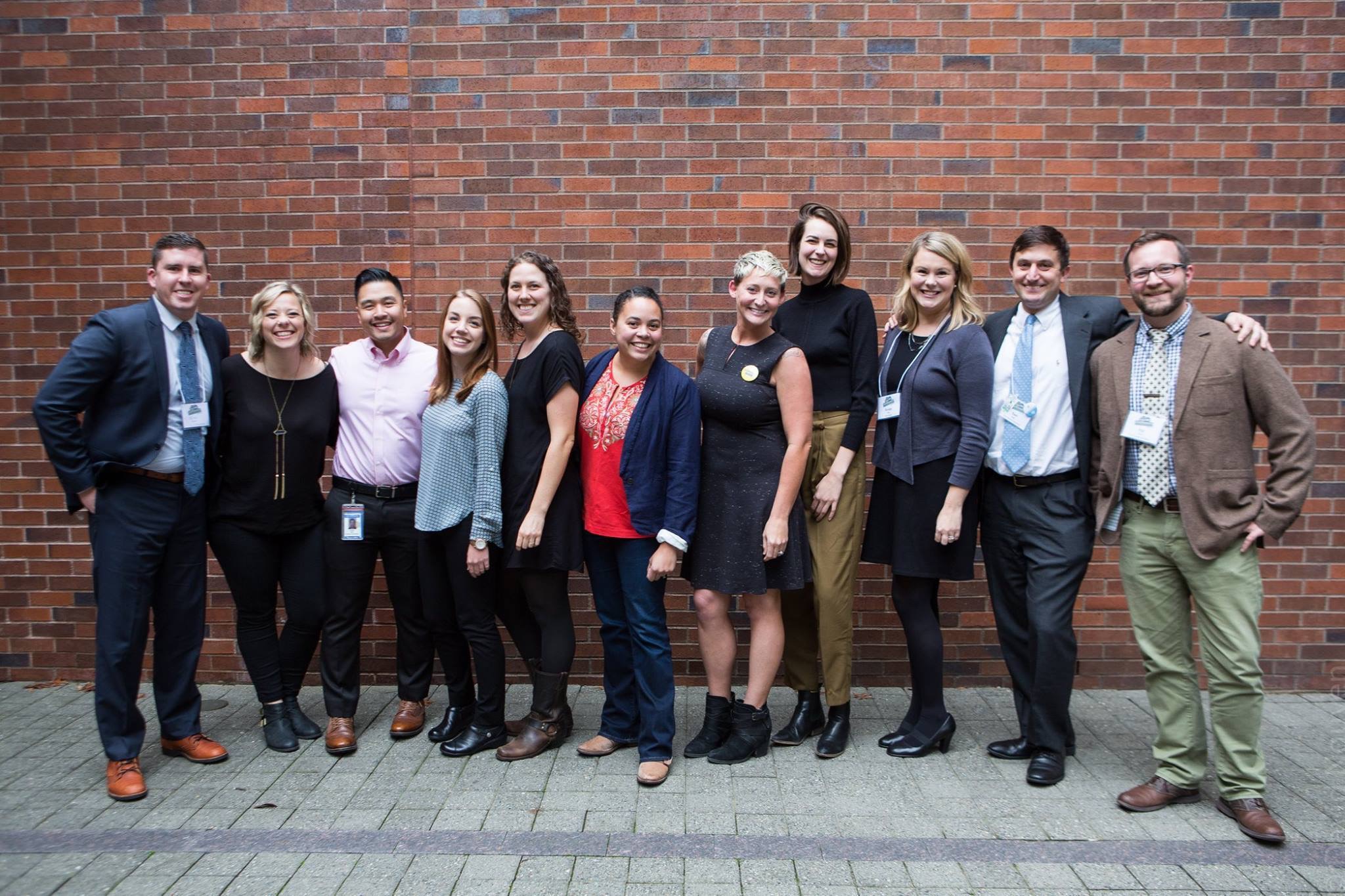 Today’s Buzz is by Katie Babits – connect with her on LinkedIn and Twitter!

What I’m Reading: The Tattooed Soldier by Hector Tobar

What I’m Listening to: Manu Chao – Me Gustas Tu

ELGL can be whatever you want it to be. Here’s a little story about how it has impacted my life. Plus a ton of pictures from over the years.

I don’t know what made you find ELGL, I found it by not having a clue about what I was doing. Since then, ELGL has kept in in local government more times than I can count. Working in local government requires resiliency, innovation and tact. It also requires  performing when your stress level is maxed out, having the skill to pull a habit out of a hat on command, and keeping a being able to smile while a litany of expletives run through your mind. If this sounds familiar, allow me to explain how ELGL has helped my sanity.

Working as a management analyst (or any variety of that title) comes along with being assigned projects that you have zero experience in accomplishing. This was the case when I found ELGL for the first time. As the only millennial in my organization, communications and information technology were added to my main responsibility of human resources. I learned about communications and information technology by googling every question I had, including the concept of branding an organization (outside of a method for telling which cattle belonged in your pasture, but that story is for another time).

My Google search of branding led me to Heather Geyer, who had successfully finished up rebranding for Wheat Ridge, Colorado. That’s internet rabbit hole that has changed my life forever. I didn’t end up branding anything, but I did find my people.

There were a lot of things about me that were not similar to my coworkers in that organization. I made some lifelong friendships, and engaged with some truly great humans. But before I found ELGL, I thought something was wrong with me, that I had picked the wrong career, had loads of student loan debt for a career that was a complete mismatched, and I should probably quit everything and become a brewer (real option, almost did it).

Stumbling upon ELGL introduced me to a world of local government nerds. I started getting involved in the Morning Buzz. Back then, we would post 20+ articles about other nerdy things in local government. This was an unknown therapy of how I could be plugged in to cool things people were doing all over the country & world (seriously amazing bike-able communities out there). I also learned how to use WordPress, upped my GIF game, and let me tell you about Twitter! I hustled my way into attending #ELGL14 by taking the train to Portland, staying with a friend from high school, & signing on to the Twitterazzi in exchange for registration. But I didn’t have Twitter or any Twittelligence. The one & only Kent Wyatt inspired me into action & I created my handle, @BabitsKnopeful. Kent had a way of telling me Twitter was easy, so I believed him. My nerves didn’t really exist. Figure it out. I’m the only one who thinks I can’t do it.

The conference was like coming home without realizing I had a home to come to. I know it’s mushy, but have you ever felt isolated, like your ideas didn’t matter, like you must be stupid because you are young and you are not sure if it’s because of your age, gender identity, sexual orientation, race, ethnicity, visible or invisible abilities, life decisions, or just plain bubbliness for life? All of these characteristics don’t apply to me, but I know any combination of characteristics (and many I did not include) apply to ELGL members & non-members, and finding this organization to validate my experience and who I am made me 1,000x more resilient that my life pre-ELGL.

This brings me to my next iteration of my ELGLvolution. ELGL formed out of the lack of network for people like us. One Sunday morning, my birthday twin Kirsten Wyatt wrote an armchair quarterback rant about ale, stale and male leadership in local government. This was in response to a report released by ICMA.

This post changed my life and influenced my career trajectory. Kirsten said the percent of women in leadership had not changed since Reagan was president. Reagan, y’all. That’s just plain embarrassing. I was fired up. The #13Percent campaign was borne, and with it the opportunity to write for ELGL in a different format, where anyone could sign up to write about #13Percent, through our own experiences, disappointments, and achievements. Articles from people of color and the LGBTQ community blew me away. It helped me identify the privilege I had in my experiences and how that informed my role in changing what the workforce looks like in local government. Eventually this campaign led to the Diversity Dashboard and inspired conversations in my organization about how to connect with, engage and serve underrepresented populations and staff. Ultimately, these conversations led to a job offer I never would have applied to in the first place, teaching staff about implicit bias and intentionally serving whole communities and helping community members in the aftermath of hate activity.

Kirsten, much like Kent back in the day in the conversation about Twitter, made me believe in myself. I made one comment on how we should be intentional about having diverse conference topics and panels, and just like that I became involved in organizing ELGL conferences.

Kylie Bayer and I were in charge of promoting sponsors one year, which seemed like the most stressful thing we had ever done. Three years later we organized panels and emceed the conference like a couple of bosses. Kirsten would tap us to speak at other conferences on equity and inclusion, nerdy HR topics, or generational differences in the workforce. Kirsten’s pure belief in us that we could do it changed me into a public speaker when I never would have thought it possible.

Next month, I speak at four different conferences about equity and inclusion in local government. I currently work to diversify candidate pools for local government executive recruitment. I even met my current CEO Ron Holifield at an ELGL conference, when he self-identified as an old white guy from Texas talking about #13Percent because you do it from where you are, because of who you can reach.

This post may be a bit misty and mushy and goes on and on about my ELGL journey. It all comes down to this point. ELGL has been a career accelerator for me. Not only has my career progression been directly impacted because of my involvement in ELGL, I have been able to find the areas within local government that spark my fire, and how I can use my impact to create the change I believe in, all from the platform that makes the most sense to me. Our world is changing and at times I feel helpless and like I want to quit everything and live in a bus (also a real option that I considered).

ELGL’s flat structure and openness to new ideas can help fill in your career gaps. No job will be 100% fulfilling. We should not expect that. But we should find other ways to fill in those gaps so we can make an impact on the issues we give a damn about. I didn’t mean for this to be a huge ELGL pitch, but let me tell you from personal experience, ELGL can be for you whatever you want it to be. Just make one teeny suggestion and it could define your career.

Here’s a little montage of awesome professional head shots David Nguyen has taken over the years at ELGL conferences. He takes the best. I missed a couple years because the ELGL conference was too much fun and I forgot to find him, but seriously, he is the ultimate head shot taker. Find him.