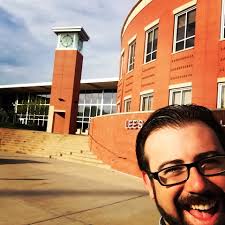 (True or False) I received a perfect attendance award.
Hahahahahahahah, No.
In high school, what did you think you would do for a living?
In HS, I was confident I would be taking over the FBI’s X-Files from Fox Mulder.
What was your favorite childhood toy?
Got my first home computer in the third grade (Apple IIe) and was hooked on tech toys ever since.
(True or False) I attended a school where the mascot was a bulldog or wildcat.
True. William Southern Elementary Bulldogs.
(Complete the sentence) Instead of doing homework, I would sometimes….
…spend way too much time building GeoCities websites.
What songs would be on your high school mix tape?
Anything Green Day or Reel Big Fish (you know, the classics)
(Complete the sentence) My favorite lunch box was….
Ghostbusters, bright red, featuring Ecto I.
What question(s) should we have asked?
Did you win any major awards?
Second Place, Mr. Patriot (High School Male Beauty Pageant).