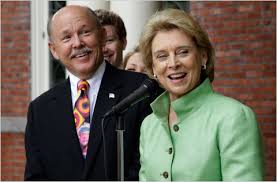 Those who attended the ELGL conversation with Gov. Gregoire were not disappointed. Gov. Gregoire displayed a comfortable, engaging speaking style which included candid answers to a wide range of questions from marriage equality to the future of the NBA in Seattle. The only unanswered question is whether her next stop is Washington state or Washington, D.C.

A common thread among attendees was their appreciation of Gov. Gregoire and Mike Gregoire for spending time after the forum meeting with ELGL members and taking pictures with members.  This seemingly small gesture has left a big impact for years to come.

Many thanks to Gov. Gregoire’s staff (Fred Olson and Teresa Olson) for coordinating the Governor’s visit. We appreciate your dedication to promoting the next generation of leaders.