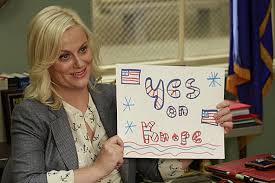 A wide ranging discussion on topics from fluoride to Portlandia was led by this week’s Knope of the Week – Charlie Hales at the recent ELGL forum. Charlie showed a deep knowledge on policy issues and pop culture with references to Portlandia and popular movies. The state of education in Portland was a key point that Charlie stressed in his remarks. He expressed a willingness to consider various funding mechanisms to stabilize and improve the current system. In light of yesterday’s report on the use of excessive force by Portland Police, Charlie stressed the importance of community policing and that he is willing to lead the way by overseeing the Police Bureau should he be elected mayor.

Using a relaxed and welcoming style, Charlie engaged the audience in dialogue that left no unanswered questions and a clear understanding of what a Hales administration would look like.